The dance show titled “Night Banquet in Palace of Tang Dynasty” has gone viral among Chinese audience, netizens replaying it millions of times. The show’s director has now taken the audience behind the curtain. 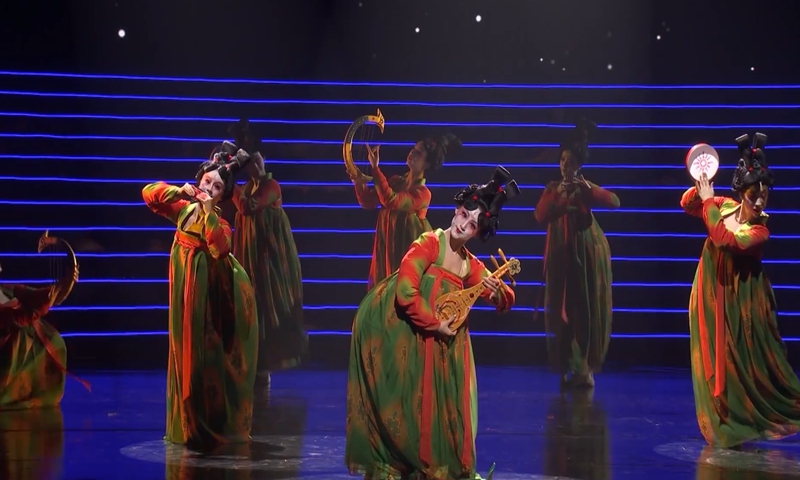 The video clip of the night banquet has been viewed 10 million times on Sina Weibo, and the tag Henan Spring Festival Gala Night Banquet in Palace of Tang Dynasty has garnered more than 880 million views.

According to Chen Lei, the general director of the show, "Night Banquet in Palace of Tang Dynasty" is adapted from the entry "Terracotta figures of the Tang Dynasty" by Zhengzhou Song and Dance Theater in the 12th Chinese Dance Lotus Award in 2020.

The show is a mix of humor and homage to traditional Chinese culture.

"We hope the the 2021 Spring Festival Gala can give everyone more joy and warmth," Chen said.

Coordinating with the original choreographers of this dance, the show did not make too many changes to the dance content itself but only slightly shortened its duration to better fit TV audience, Chen was quoted as saying.

“We used 5G and augmented reality (AR) technology to combine virtual scenes with a real stage, bringing singing and dancing into a museum setting, creating a feeling of a wonderful night in the museum,” Chen said.

As part of the show palace maids at the banquet seem to be part of paintings while walking laugh and play, sometimes they dress up for formal palace occasion.

The maids of the palace dance with the grandeur, and the cultural features of the prosperity of the Tang Dynasty are fully displayed.

To better mirror the often plus size Tang Dynasty figurines, the actresses wore sponge-filled jumpsuits with cotton in their mouths, and crescent-shaped makeup on the corners of their eyes completely reproduced the "Olique Red" trend of female facial makeup that was popular in the Tang Dynasty.

Audiences have been drawn into learning more about traditional culture after watching the Henan Spring Festival Gala because of this show. They then discovered that the actors in the gala performed "Heaven and Earth," in which they play Tai Chi while wearing space suits.

Chen said that after enjoying the gala, netizens said that they would like to go to visit the Henan Provincial Museum that he was filled with a sense of pride and achievement. "We have contributed a little bit to the revival of traditional culture," he said.

A netizen with a nickname @kenanyis said that the program really “bought our national treasure come back to life.” After watching it, I really want to go to the Henan Museum, once the epidemic is over.

Another netizen found the performance to be “so cute,” and it’s “so funny” to watch the little maids walk and bump into each other.

A netizen nicknamed @Minoz said that after watching the performance, “I suddenly felt that the antique painting ‘Riverside Scene at Qingming Festival’ could also be featured on the stage, so that the characters on the painting would dance.”

Another netizen remarked that it was amazing how popular the show was after being replayed millions of times!