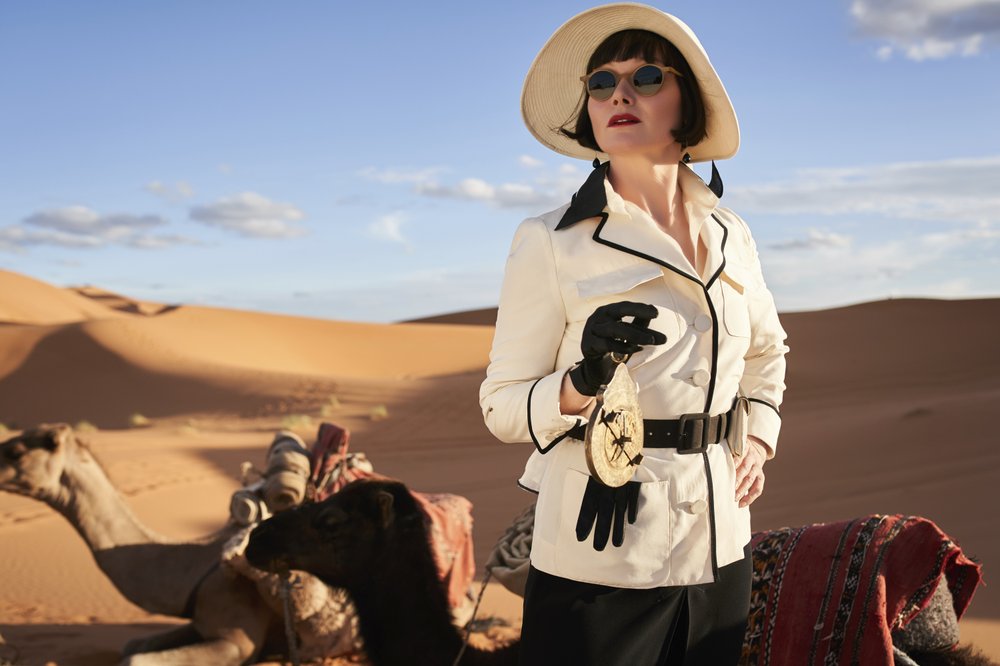 This image released by Acorn TV shows Essie Davis as Phryne Fisher in a scene from "Miss Fisher and The Crypt of Tears." The film will have a limited theater release before it streams on Acorn TV. (Photo: AP)

The intrepid and daring Phryne Fisher, last seen in an internationally popular TV mystery series, is getting the welcome back she deserves in “Miss Fisher and the Crypt of Tears.”

One flourish missing from Phryne’s return after five years: The film’s planned big-screen release in select cities, which was stymied by the coronavirus-forced closure of theaters. Before that happened, fans of the 2012-15 series “Miss Fisher’s Murder Mysteries” made showings in New York City and elsewhere a success.

“Given the enthusiastic response from US fans to attend several sold out screenings and dress in 1920s fashion, we’re sorry we can’t offer the film theatrically at this time, but we’re glad to make it easily accessible” via streaming, said Matthew Graham, Acorn TV’s general manager.

Theaters have expressed interest in re-booking the film that boasts big-screen worthy production values, including elegant costumes and sweeping desert scenes shot in Morocco. But the project’s true charm is Phryne herself and Davis’ portrayal of a bold, self-reliant woman who makes her own way in the world with guts and style and without apology. The tone of the movie, written by series co-creator Deb Cox, is gleefully feminist.

“She has no respect for the rules,” a male character harrumphs after witnessing a display of Phryne’s determination.

“That’s because they tend to be written by men,” she retorts.

Davis, a respected stage actor whose screen credits include “The Babadook” and “Game of Thrones,” said she was delighted to bring back Phryne, whom she describes as a “real James Bond, Indiana Jones” hero.

“She’s a woman of independent means who completely rejoices in her independence, but really cares about other people at the same time. She’s very happy to love any man who she wants to love, as much as she wants to love, and as frequently as she would like,” Davis said, with the last few words punctuated by a chortle.

As devotees are well aware, the peripatetic Miss Fisher grew up in Australia, attended boarding school in England, was a World War I ambulance driver in France and lived the high life in post-war Europe before returning to Melbourne to put her smarts and charm to use as a well-heeled private eye and, at times, make poor Jack thoroughly miserable.

While knowing the background enriches the story, newcomers can enjoy the film as “a meal in itself. People who have never seen the series love it as action adventure, romance, murder mystery that is satisfying in itself,” Davis said.

The movie, which had its Australian premiere last month, owes a tip of the hat to its devoted fans. An online fundraising campaign in 2017 reached its 30-day goal of $250,000 in under 48 hours, and donations continued to roll in for the film reportedly budgeted at $8 million by Every Cloud Productions, which also produced the series.

Making the most of relatively modest funding for the 100-minute film, Melbourne’s Victorian-era public buildings and private mansions helped the city double for 1929 London at points in the film directed by Tony Tilse. Among the grand properties on display: the National Trust’s Labassa and Ripponlea estates and the Victorian government-owned Werribee Mansion.

The filming in Morocco was memorable for Davis. It took place in the town of Ouarzazate, which has hosted other productions. Besides the magnificent Sahara desert, she said, they made use of existing sets that included an “incredible” one from filmmaker Ridley Scott’s 2005 “Kingdom of Heaven.”

She admits to a less appealing moment on set.

“Here we are in the Sahara, where they shot ‘The English Patient,’ and it’s incredible and beautiful. But tummy upsets and linen suits don’t necessarily go together,” Davis said, with a rueful laugh.

While she predicts audiences will find the film’s conclusion satisfying — “Like the cat that ate the cream” — there is potential for more Fisher movie adventures, depending on the audience’s response and, crucially, what the script might be.

“I’m up for any great story, because Phryne is a great character, and we always have to see her growing and changing and doing things that we’ve never seen her do before,” Davis said. “Otherwise it’s just boring, and I would rather not bore myself or anyone else.”