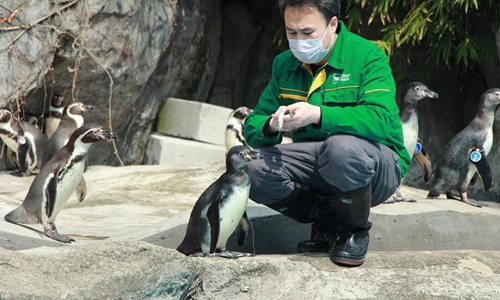 The discovery of dead animals in an indoor animal theme park in Changsha, Central China's Hunan Province, has sparked concerns over the illegal trade of wildlife and living conditions of animals in these zoos, which are a popular feature of many shopping malls in China.

The indoor animal theme park in shopping malls have become increasingly popular in recent years in China, which allow visitors to come into "close contact with animals", but neglect the living conditions of animals, observers noted.

The local forestry authority of Changsha is investigating the source of animals in an indoor animal theme park, where many animals such as rabbits, snakes, and quails have been found dead in past months due to the impact of the epidemic and poor management, reports said.

Dead animals were first found around January. The dried out bodies of several hamsters, minks and squirrels, as well as some lizards and frogs, were found on March 24 in the zoo, which had a shortage of cleaning staff. Alpacas, a horse, a donkey, a civet cat, a mink and several squirrels had also been found dead previously, two of the zoo's former staff members revealed to media website China Economic Net.

The bodies of the dead animals had been cleared as of press time, with the surviving animals sent to farms. Former staff members at the zoo told the media that the manager had delayed their salaries due to poor management.

Sun Quanhui, a scientist from World Animal Protection in Beijing, told the Global Times on Sunday that densely populated and noisy indoor animal theme parks pose a physical danger to animals, which likely led to the deaths.

indoor animal theme parks are popular, especially among children who usually feed, touch or take photos with those captive animals, which also poses a risk of diseases spreading from animals to humans, Sun noted.

To grab customers' attention, indoor animal theme parks would not only feature domestic animals but wildlife as well. The popularization of indoor zoos leads to the possibility of illegal wildlife trade, Sun said.

Xing Shijie, a wild animal protection volunteer, told the Global Times on Sunday that some indoor animal theme parks import animals from abroad, such as mongooses from Africa and capybara from South America.

"When animals enter the indoor animal theme park it means they will not see the sun ever again. It is torture for them and could lead to their deaths," Xing added.

Displaying animals should be done with the aim of protecting them and educating the public, rather than amusement, Sun noted.

In recent years, it has been common for large-scale shopping malls to bring in zoo projects. Cities such as Suzhou, Tianjin, Guangzhou, and Wuhan have built indoor animal theme parks of different sizes, a Xinhua News Agency report said.

Some indoor animal theme parks are well managed, with staff on hand to explain the living environment and conditions of different animals. Visitors can also feed and take photos of the animals under the supervision of professional breeders.