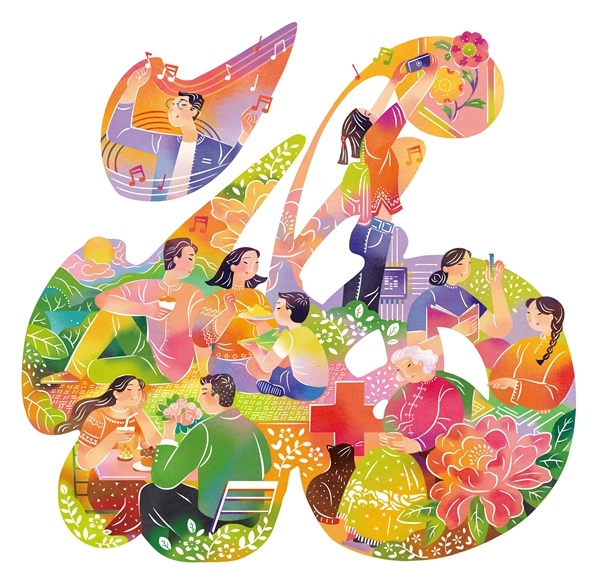 The concept of a moderately prosperous society in all respects bridges ancient and modern wisdom as China plans to achieve the standard this year, report Wang Qian in Beijing and Xing Yi in Shanghai.

Scholars are examining the centurieslong evolution of the ancient Chinese concept of xiaokang, a moderately prosperous society, as the country plans to achieve the standard this year by eliminating absolute poverty.

"Xiaokang has become a foundation of China's reform policy, because it was based on ancient culture," says Alexander Lomanov, deputy director of scientific work and head of the Center for Asia Pacific Studies of the Institute of World Economy and International Relations, part of the Russian Academy of Sciences. "At the same time, it was secular and rationalistic, although it was colored by Confucian moral philosophy."

A concept connecting ancient tradition and modern ideology, xiaokang was first recorded in Shi Jing (The Book of Poetry), China's earliest collection of poems and songs.

In Min Lao, a poem translated by the Scottish Sinologist James Legge, the anonymous author wrote: "The people indeed are heavily burdened but perhaps a little relief (xiaokang) may be got for them."

The term is elaborated upon in Liji (The Book of Rites), the Confucian classic emphasizing the importance of ritual.

In Confucian texts, xiaokang refers to a society where "people work for their own benefit and for their families. They strive to accumulate wealth and property," Lomanov explains.

"The ancient Confucians believed that such a society could become peaceful and prosperous through moral education and ethical constraints."

Although the term had been historically vague, the concept has gradually evolved and become clearer as an essential step on the country's development road map since the late 1970s.

"Its meaning has evolved with the country's modernization under the CPC leadership."

The term was given new life in 1979 when late leader Deng Xiaoping used the concept of xiaokang to differentiate the Chinese path of development-the "four modernizations"-while discussing China's modernization with Japanese Prime Minister Masayoshi Ohira.

Lomanov says that Deng's use of the term "was intended to help China to restore civilizational dialogue and understanding with more economically developed countries and territories of East Asia of that time".

He adds, "Deng found a very appropriate formulation that helped to rally Chinese society around the tasks of economic development and modernization … The transition from the idealistic impulses of the 1960s and 1970s to the realistic goals of reform and opening-up was not simple and easy."

Deng further elaborated on his concept in 1984, saying, "Xiaokang means that, by the end of this century, our per capita gross domestic product reaches $800."

The country's per capita GDP was about $250 in 1984, according to official data.

"This is the first time that the picture of xiaokang was accurate in history, and the goal impressed me," Shanghai Academy of Social Sciences researcher Ma Chi says.

"Eight-hundred dollars was a smart goal, carefully considered by authorities, which indicated that China aimed to become a middle-income country because, according to the Classification of Economies of the World Bank then, per capita GDP for middle-income countries ranged from $786 to $9,655."

Lomanov says: "Since the 1980s, Chinese leaders have been explaining xiaokang in quantitative terms that everyone can understand and set exact goals to increase people's incomes and also set the deadlines for achieving these goals.

"Deng managed to unite Chinese society and motivate individuals to participate in the modernization process. At the same time, the commitment to China's socialist path of development has not been lost."

This goal was achieved in 1997, far ahead of the stipulated timeline. Last year, China's GDP per capita exceeded $10,000.

"What seemed to the common man a desirable material goal at the beginning of the reforms-a watch, a bicycle, a sewing machine, a refrigerator and a television-have now become routine household items," Lomanov says.

Xiaokang has been invoked in political planning since it was named as the Party's new historic mission at the CPC's 15th National Congress in 1997.

In his report to the 19th CPC National Congress on Oct 18, 2017, President Xi Jinping highlighted the goals of realizing a moderately prosperous society in all respects and to ensure the victory of socialism with Chinese characteristics in a new era, indicating the achievement of xiaokang had entered the final phase.

"Xi's saying 'to understand whether it is xiaokang or not, you need to look at life in the villages' reveals the current Chinese leadership's understanding of the problem," Lomanov says.

"One needs to look not at statistics or abstract numbers but at the real everyday lives of people, their difficulties and their aspirations.

"The process of constructing the xiaokang society marked the transition from quantity to quality, from raising people's incomes to ensuring a higher quality of life."

He points out that limiting xiaokang to per capita income may oversimplify poverty alleviation.

"The policy of building the xiaokang society was successful because it helped activate people to become rich. But it did not forget about the need for balanced development without excessive income gaps between social strata and regions," he says.

"After all, a small number of very rich people can balance the statistics of the desperate acute poverty of millions. In China, great efforts are being made to help everyone to escape poverty."

He says that it's especially noticeable this year, since COVID-19 has hit the economy hard.

Beijing Capital Normal University professor David Moser says: "In the last three decades, over 1 billion people globally have been brought out of extreme poverty. According to the World Bank, of that 1 billion people, around 800 million of them were Chinese. This is quite a remarkable achievement, and one for which China does not often receive credit."

Xiaokang goes beyond economic strength to include advancements in education, investment in science and technology, cultural flourishing, environmental improvement and social harmony.

"Now, it is a question of people's satisfaction with their quality of life, including social benefits, access to education and medical services, and the quality of the environment," Lomanov says.

The concept of xiaokang means democracy, the rule of law, fairness, justice and a good environment, according to Xinhua News Agency.

"In the spirit of the original Confucian understanding of xiaokang, the importance of access to cultural services is growing steadily," Lomanov says.

"The state cares more about cultivating high moral standards in society, and supporting the development of science and education."

He adds that China remains the world's largest developing country, but it is making persistent efforts to ensure access to health services, education and social guarantees for vulnerable groups.

According to the Party's goal, the central government has laid out ambitious new long-term goals of "basically achieving socialist modernization" by 2035 and becoming a "great modern socialist nation" that is prosperous, strong, democratic, culturally advanced, harmonious and beautiful by 2050.

Some scholars highlight the importance of solving income inequality.

"China, like the United States, has a problem with an uneven distribution of wealth, which can result in social tension and popular resentment toward the moneyed class," Moser says.

China is aware of this problem and is attempting to address it, he adds.

Ma says that the well-known Hu Line, which was drawn by population geographer Hu Huanyong in 1935 to mark striking differences in population distribution and urbanization between China's eastern and western regions, had not drastically changed until the end of the 20th century.

"How to enable everyone to benefit from social reforms and development, and how to promote balanced resource allocation in a sustainable way, have been issues that require scholars' and officials' research and investigations of the future agenda," he says.

The United Nations Development Programme's resident representative for China, Beate Trankmann, told China Daily previously that it's important to recognize that poverty has many dimensions besides income.

Since Deng first used the term xiaokang in 1979, "China has demonstrated that the goals of xiaokang within the boundaries of a huge nation state can be achieved in just over four decades if effective policies are implemented", Lomanov says.

Liu Dongchao, a professor at the department of literature and history of the CPC Central Committee's Party School, says that after achieving xiaokang by the end of the year, the CPC leadership, in the Party's centenary year, will move firmly toward realizing the next goal-the rejuvenation of the Chinese nation.