CULTURE Denise Ho gets splashed with paint in Taiwan

Denise Ho gets splashed with paint in Taiwan 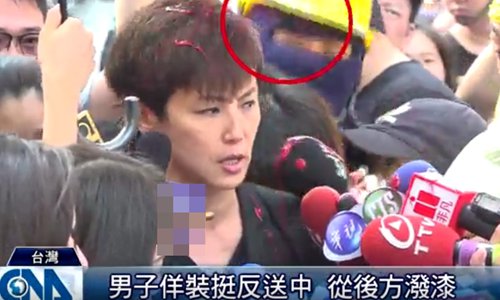 Denise Ho Wan-see, a Hong Kong singer and Hong Kong secessionist of Canadian nationality, got red paint splashed on her by two masked men at an interview during an anti-Beijing parade held on the island of Taiwan on Sunday, and an expert said that collusion between separatist forces in Taiwan and Hong Kong will only cause instability and conflicts across the Taiwan Straits and will not gain people's support from both sides.

Police said they arrested the two men, with one of them surnamed Hu, a member of the Chinese Unification Promotion Party (Unionist Party), a political party in Taiwan that promotes the island's reunification with the Chinese mainland, according to a report by the Taiwan-based news site Liberty Times Net on Sunday.

Police said they will investigate the incident as a case of public insult, the report said.

"The emotional expression from the Unionist Party is understandable," Tian Feilong, an associate professor at Beihang University in Beijing and expert on Hong Kong studies, told the Global Times on Sunday.

"Collusion between separatist forces in Taiwan and Hong Kong has aroused the indignation of Chinese patriots on the island," said Tian.

Ho and other members of radical Hong Kong opposition forces, such as the leader of the pro-secessionist Hong Kong National Party Chan Ho-tin, went to Taiwan to attend an anti-Beijing parade to support the riots in Hong Kong, Taiwan-based news agency the Central News Agency reported on Sunday.

The report said Ho was splashed with red paint on her hair and clothes by a masked man wearing a helmet from behind while being interviewed on Sunday, and the police later arrested two suspects.

"Taiwan's support of the riots in Hong Kong is not in line with Taiwan's prospects and fundamental interests," Tian said.

"The conspiracy of Taiwan and Hong Kong separatist forces has crossed the bottom line of 'one country, two systems' principle and will only aggravate cross-Straits conflicts and lose public support on the island of Taiwan," Tian noted.