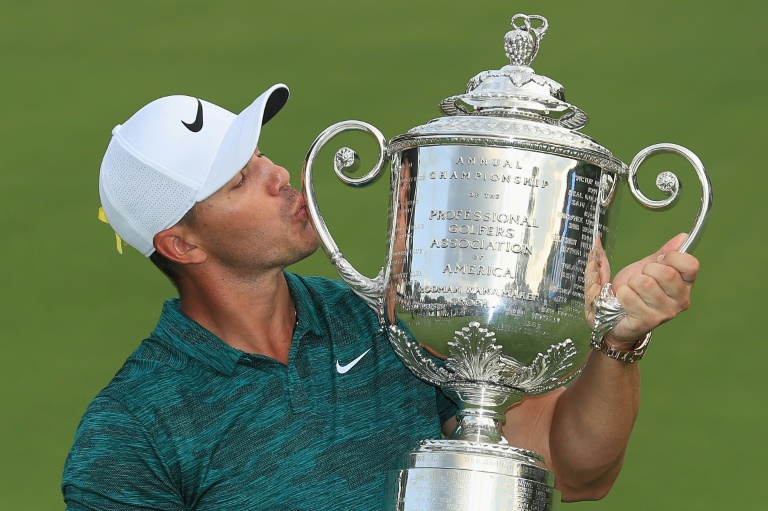 Brooks Koepka has had to get used to playing slightly under the radar, but has now won three major titles in less than two years. (Photo: AFP)

Even when hoisting a US Open or PGA Championship trophy, Brooks Koepka is careful to keep a chip balanced on his shoulder -- even if it's just a small one.

"I think I've done a good job of that. I need to continue doing that, because once you're satisfied, you're only going to go downhill.

"You try to find something to get better and better, and that's what I'm trying to do."

The 28-year-old American joined one of golf's most select fraternities with his second straight US Open triumph at Shinnecock Hills in June, becoming just the seventh player to win back-to-back US Opens and the first since Curtis Strange in 1988-89.

Koepka proved his triumph at wide-open Erin Hills was no fluke, grinding to victory at one-over par on a brutal Shinnecock course that sent Tiger Woods and Jordan Spieth, among others, packing early.

Then for good measure, Koepka captured his third career major title on Sunday at the PGA Championship, outdueling Woods and Adam Scott down the stretch at Bellerive Country Club to shoot the lowest 72-hole score in tournament history, 16-under par 264.

Koepka displayed his trademark composure under pressure, unwavering and confident in his shotmaking with two birdies in the last four holes to secure the victory.

Overlooked going into the US Open after missing the Masters with a left wrist injury, Koepka had been all but written off at Shinnecock after flirting with the cut line when he was seven-over par during the second round.

Not that Koepka cared about that.

"I always feel like I'm overlooked," he said. "It doesn't bug me. I just kind of keep doing what I'm doing, keep plugging away, kind of hide behind closed doors sometimes, which is nice -- kind of the way I'd like to keep it."

Unfortunately, that doesn't jibe with his avowed aim of piling up more tournament titles -- majors included.

A 15-week enforced absence after wrist surgery earlier this year only served to show him just how much he missed competing.

"I missed the preparation. I miss competing," Koepka said. "I've got to be competing at something. It doesn't matter what it is."

Adding to a sense of isolation, Dustin Johnson, Bubba Watson and Phil Mickelson were the only tour colleagues who reached out to him during his absence.

"You make a lot of friends out here, and you feel like a lot of them, you just get forgotten," Koepka said.

It's a long way from the camaraderie he experienced as he toiled on the European Challenge Tour, building his resume after failing to earn his PGA Tour card through qualifying school after turning pro in 2012.

Three victories on Europe's developmental tour five years ago saw him promoted to the European Tour, where he won the 2014 Turkish Airlines Open before making his way, finally, to the US PGA Tour.

"It was the most fun I've ever had playing golf," Koepka says of his stint in Europe, which he reckons took him to tournaments in 21 countries before he was done.

"Probably the funnest time of my life," he says. "I enjoyed it way more than I probably do now playing on the tour."

Koepka has thrived in the team set-up of the Ryder Cup, producing an impressive three wins with one defeat in his debut at Hazeltine two years ago as the United States regained the trophy.

The Americans will face a different challenge from the forgiving fairways and fast greens of Hazeltine as they seek to lift the Cup on European soil for the first time in 25 years at Le Golf National just outside of Paris.

Koepka said that just as his major victories on vastly different courses showed, he was up for any challenge.

"If you start complaining, you're looking for excuses," said Koepka, who believes his game is suited to "all time zones".