Differences in Opens shown through exemptions

The distinction between golf's two oldest championships goes beyond one being played on links courses in the UK and the other being played in the United States. They also have a different reach, which can lead to a different idea of "Open." 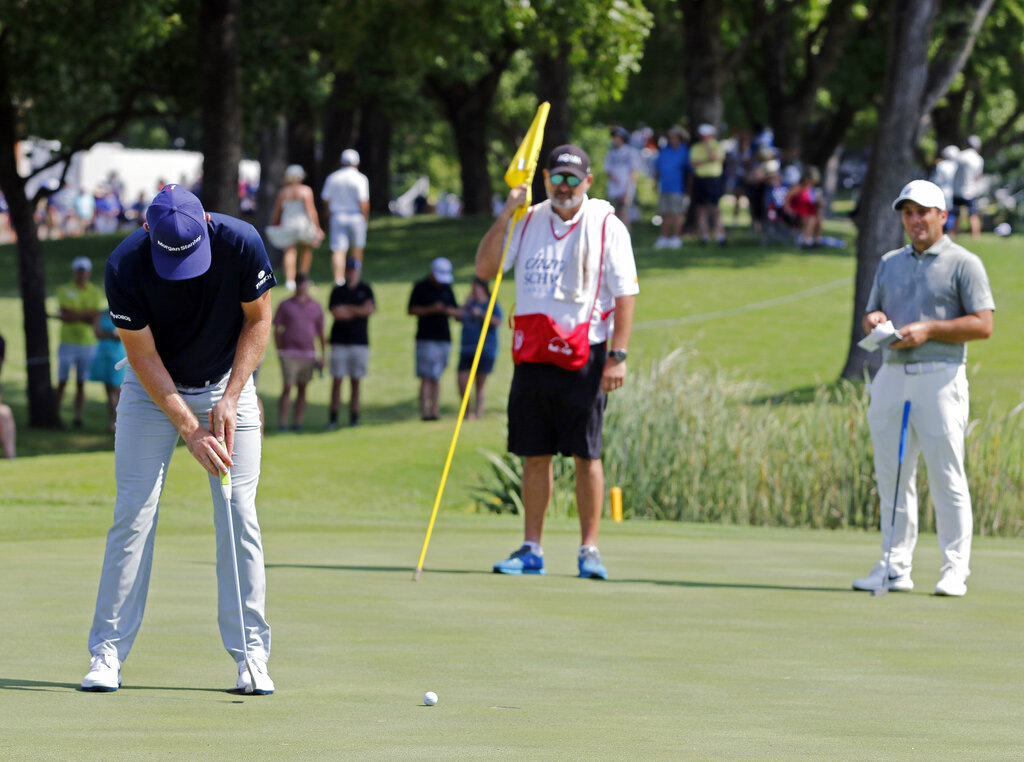 Justin Rose putts on the ninth green, with caddie Mark Fulcher and Francesco Molinari in the background, during the third round of the Charles Schwab Challenge golf tournament at Colonial Country Club in Fort Worth, Texas, Saturday, May 25, 2019. (Photo: AP)

The US Open likes to consider itself the most democratic of the four major championships because roughly half of the 156-man field has to go through qualifying.

This year, 76 players were exempt from qualifying, including the special invitation for two-time champion Ernie Els, meaning slightly more than half of the field will have to go through 36-hole qualifying to get to Pebble Beach.

Sixteen of the 76 players — 21 percent — were exempt by reaching the Tour Championship at East Lake.

For international players who are not PGA Tour members, the only way to avoid qualifying is to be in the top 60 in the world three weeks before the US Open. Otherwise, there are 36-hole qualifiers in America, England and Japan.

The British Open considers itself the most international major, and it shows in the way the field is comprised.

One exemption was awarded the winner of the Argentina Open (Isidro Benitez). Another was given to the winner of the Asia-Pacific Diamond Cup on the Japan Golf Tour (Yosuki Asaji). The Open gives exemptions to Order of Merit winners from tours in South Africa (Zander Lombard), Australia (Jake McLeod), Asia (Shubhankar Sharma) and the leading two players from Japan (Shugo Imahira and Shaun Norris).

McLeod previously earned a spot in the Open Qualifying Series, while Sharma was previously eligible as the top 30 in the Race to Dubai on the European Tour.

The British Open takes the top 30 players from the Race to Dubai and the FedEx Cup on the PGA Tour, along with taking up to five players from the current points list on both tours through June 23.

Add it up and the British Open can exempt as many as 100 players for Royal Portrush this year.

The next step for the USGA is to bring the US Women's Open closer in line with the open nature of the men's event. The US Women's Open, which starts this week at the Country Club of Charleston, had 97 exempt players this year.

Starting next year, the USGA is eliminating all exemptions related to the LPGA Tour money list.

Also, the top 30 from the previous year's Race to CME Globe on the LPGA Tour will be exempt.

The USGA says the US Women's Open has averaged just over 90 exempt players over the past five years. Those numbers are expected to decrease slightly under the revised exemption categories next year.

The Memorial is two weeks after one major, two weeks before another. Jack Nicklaus is happy with the field — seven of the top 10 in the world, including Tiger Woods as the Masters champion — though he is missing the top two players in Brooks Koepka and Dustin Johnson.

Koepka and Johnson will be in the RBC Canadian Open next week. Koepka likes to play the week before a major, while Johnson is an RBC ambassador. Johnson has played the Memorial every year that he's been eligible.

The Canadian Open was moved from late July to the week before the US Open in a major overhaul to the schedule to finish the season ahead of football.

Nicklaus thinks it is too condensed.

"I think this new schedule is going to hurt a lot of tournaments," Nicklaus said. "I'm not a big fan of what they're doing."

Nicklaus believes it won't be long before players will build their schedule around the four majors, The Players Championship and a few World Golf Championships.

"That's going to be the season," he said. "They'll play some stuff on the outside of it, but the tournaments in the middle are going to be hurt. We're lucky. We're sitting in a good spot. Brooks would play here if he didn't have the PGA Championship two weeks ago."

Players will be competing for a seven-figure prize for the first time at the US Women's Open this week.

The USGA announced Tuesday it is raising the prize money at the US Open to $12.5 million and at the US Women's Open to $5.5 million. The purse for the US Open is the largest of the four majors and equal to The Players Championship.

Notable about the US Women's Open — always the largest purse on the LPGA Tour — is the winner getting $1 million.

John Bodenhammer, the senior managing director of championships for the USGA, says the purse increase is an ongoing effort to create an experience for players "commensurate with the game's most prestigious championships."

Justin Rose is parting ways with his longtime caddie as Mark "Fooch" Fulcher continues to recover from heart surgery.

"After an amazing 11 years with Fooch, our successful run has finished for now, as Fooch is required to take an indefinite leave of absence on caddying to focus on his health and well-being after the heart procedure earlier this year," Rose said in a statement on Twitter.

Fulcher had surgery in January on the mitral valve in his heart. He returned at the Masters. Rose said he had "no doubts" they would work together again.

Jack Nicklaus came away with his first Rolex when he played in the 1966 World Cup in Japan, and it's been on his left wrist ever since.

And now it's going to auction, with the proceeds going to the Nicklaus Children's Health Care Foundation.

The auction will be Dec. 10 in New York. Nicklaus wore it Tuesday at the Memorial, and he's also taking the gold Day-Date watch to Pebble Beach for the US Open to drum up publicity ahead of the auction.

"This is the very first watch I ever owned, and the only watch I wore for every professional tournament I've won," Nicklaus said.

Jan Stephenson has chosen actress Jane Seymour to introduce her when she is inducted into the World Golf Hall of Fame during the U.S. Open. Billy Payne has selected his successor at Augusta National, club chairman Fred Ridley, while Retief Goosen has selected Gary Player and Dennis Walter has chosen Jack and Barbara Nicklaus. The host for the induction will be Terry Gannon. ... NCAA champion Maria Fassi has received an exemption to play in the Marathon Oil Classic on the LPGA Tour. Fassi makes her pro debut this week at the U.S. Women's Open. ... There were no ties among the top six finishers at the Senior PGA Champions, the first time that has happened on the PGA Tour Champions since the Boca Raton Championship in 2018.

STAT OF THE WEEK

Tiger Woods, Paul Azinger, Curtis Strange and Raymond Floyd are the only players to win the Memorial and then add a major championship later that year.

"Would 82 be a major achievement? Absolutely. No question about that. But you ask Tiger, which he would rather win, 82 or 18, I think you might get a different answer." — Jack Nicklaus, comparing the record 82 PGA Tour victories by Sam Snead and his record 18 majors.