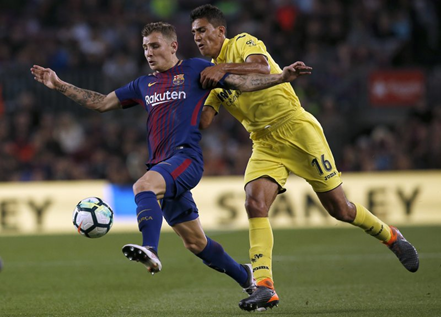 France left back Lucas Digne has joined Everton from Barcelona as the second signing of recently hired manager Marco Silva.

Everton announced the arrival of the 25-year-old Digne on Wednesday, a little over a week before the start of the Premier League season. Brazilian winger Richarlison has also joined the club this offseason from Watford.

Digne was the back-up left back to Jordi Alba at Barcelona for the last two seasons, having previously played for Paris Saint-Germain and on loan at Roma. It means he’ll be playing in his fourth country in three years.

Silva said Digne is a “high-quality player, aggressive, with good technical ability ... he is accustomed to winning. This is his mentality having captured titles in his career and having these on his resume.”

Digne wasn’t part of the France squad that won the World Cup last month, after being named on the standby list.

No financial details were disclosed. Digne signed a five-year deal.