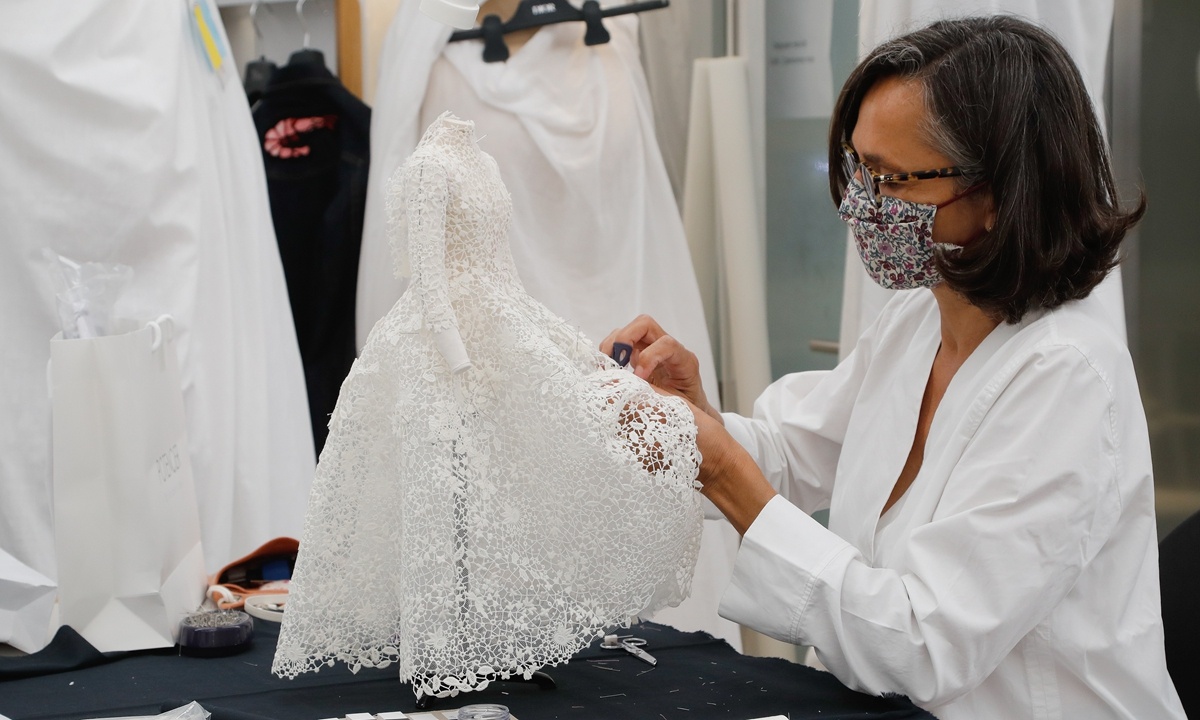 An employee sews a miniature dress for the recording of the Dior haute couture collection's presentation movie in Dior's sewing workshop in Paris on Saturday. (Photo: AFP)

Forced online by the coronavirus, labels tried to replicate the glitz and glamour of the real thing by recruiting film and television stars for the films which replaced runway shows.

In a bold move, Dior raised eyebrows by drafting in the Italian director Matteo Garrone, best known for gritty gangster films Gomorrah and Dogman, to immortalize its haute couture collection.

The gamble seems to have paid off in spades.

Gorrone weaved the story of the Theater of Fashion, a touring exhibition of dolls dressed by French designers including Christian Dior just after World War II, into the fantastical universe of his own 2015 film, Tale of Tales, starring Salma Hayek and Vincent Cassel.

'Not one black person'

In the Dior video, two bell boys wheel a trunk modeled on the fashion house's Paris headquarters through a dreamy primeval forest and offer the nymphs and forest goddesses each a heart-stopping look to try.

The director said Dior's Italian creator Maria Grazia Chiuri gave him the idea for the storyline.

"When I saw the trunk with the small dresses it was already a fairytale," he added.

But not everyone was so enchanted.

Some of the most liked comments on the video pointed out that there was "not even one black person in it," while the New York Times' Elizabeth Paton tweeted wryly, "Not very diverse casting [with the exception of the man-goats]."

Supermodel Naomi Campbell had earlier opened fashion week by saying it was time the industry took on the lessons of the Black Lives Matter movement and started "enforcing inclusion."

Like Dior, the Dutch designer Iris van Herpen called in cinematic reinforcements for her video.

Her compatriot, actress Carice van Houten - the Red Priestess from Game of Thrones - was the star of Van Herpen's digital offering, which concentrated on a single one of her ethereal high-tech looks.

Van Herpen said she found the leap to digital difficult, "very unsure and quite hectic."

She said she missed the "collaborative aspect of previous shows" and the adrenaline of showing live.

Although a big fan of Van Herpen and Garrone, critic Diane Pernet, who also runs the ASVOFF fashion film festival, said she was not impressed by much of what she had seen.

"I am sorry, I think they can do more," the Paris-based American said, saying labels "could pick up a few tricks from students at the Royal Academy in Antwerp," the alma mater of such acclaimed designers as Dries van Noten, Martin Margiela, Balenciaga's Demna Gvasalia and Ann Demeulemeester.

"I'll say one thing... you don't have to sit there for the usual 20-30 minutes twiddling your thumbs and waiting for them to start," she tweeted.

The Paris haute couture shows continue until Thursday, to be followed by four days of menswear shows.