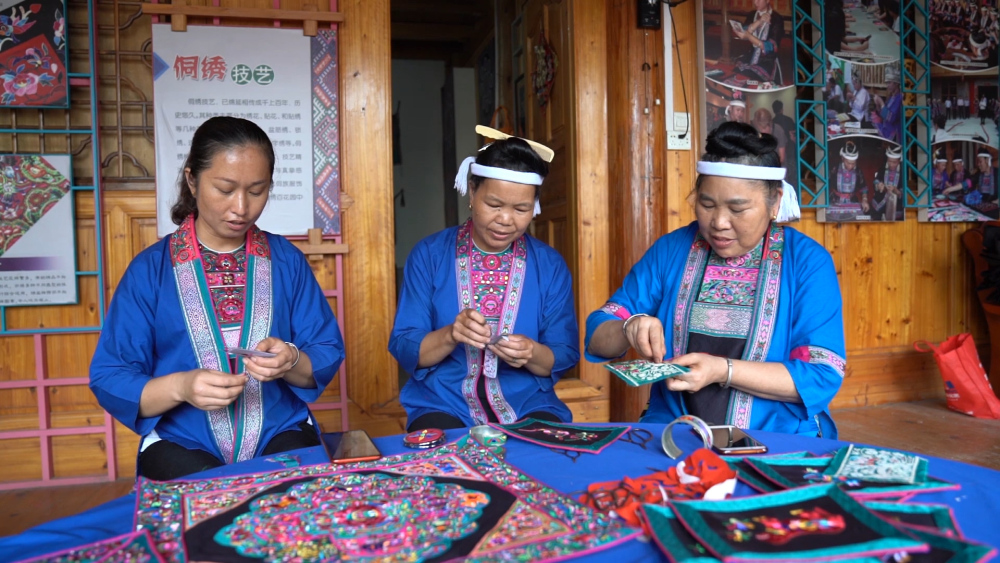 As an inheritor of the intangible cultural heritage of Dong embroidery, all the 58-year-old wants is to pass on this traditional craft that she began learning as a child and regards as her lifetime career.

Yang, a native in Tongle Township of Sanjiang Dong Autonomous County in south China's Guangxi Zhuang Autonomous Region, learned Dong embroidery from her mom at the age of seven as is a tradition for most Dong girls.

As an important part of the Dong culture, Dong embroidery boasts a long history. Birds, animals and flowers are among the most frequently used decorative patterns. These patterns are embroidered on clothing by the ingenious Dong women to express their love and reverence for nature.

"After getting married, I learned the craft from my mother-in-law," Yang said. "I've been doing Dong embroidery for 50 years but never got bored with it."

Yang's embroidery skills got better and better under the guidance of Qin Naishiqing, her mother-in-law and a renowned inheritor of the craft, who is now 94 years old. With many award-winning works, Yang also became an inheritor of this intangible cultural heritage.

Yet she was reluctant to find out that fewer and fewer young people were willing to learn Dong embroidery because the craft brings in a very minimal income.

"It used to take us half a year or more to finish a set of pure handmade Dong clothes over a decade ago, but we could only earn some 100 yuan (about 15 U.S. dollars) by selling it," Yang recalled. Back then, she often worked till midnight every day to pay for her daughter's tuition.

Yang came up with the idea of establishing the embroidery museum as her exquisite works gradually became more and more popular and sold well. The museum has attracted many experts and visitors from across the country.

According to Yang, a set of Dong clothes can go for up to 8,000 yuan now, and embroidery crafts like stud earrings and handmade bags sell well in Hong Kong and other places.

"With government support and rising orders, people can make a living and earn more with Dong embroidery," she said.

Yang also trains local embroiderers at her studio and is on her way to realizing her dream of passing on the craft to new generations.