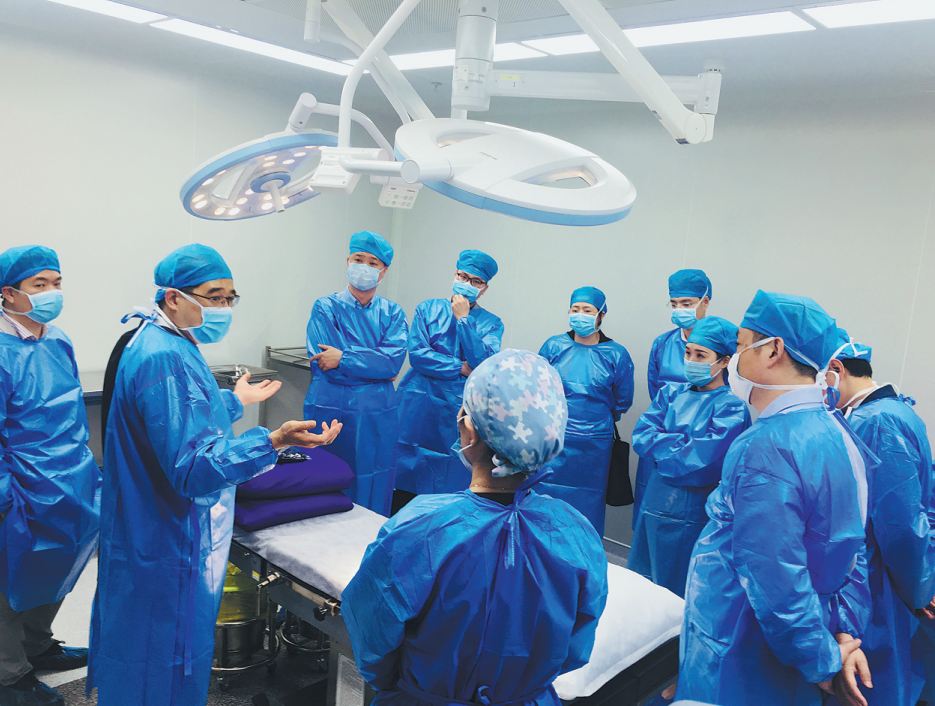 In 2013, when he resigned from the prestigious Shanghai East Hospital as director of its vascular surgery department, Zhang Qiang, then 47 years old, was well known for his medical expertise and kindness to patients, earning him the moniker "Doctor Smile".

He made the decision to exit the public hospital system and become an independent practitioner in the hope of providing better treatment to patients and earning a higher income.

Today, Zhang is not only a vascular surgeon, but also the founder and head of Dr. Smile Medical Group, China's first group medical practice, which he established in Shanghai in July 2014.

Back then, group practices, in which doctors partner together to offer medical services to patients and share operational costs, was a fairly new concept in China.

But in many other countries such as the United States, group medical practices are common for doctors who work independently instead of being employed by hospitals.

Since 2014, group practices have sprung up across China, and many established doctors have left hospitals to start their own practices.

A recent example is Zhou Yuehua, one of the most acclaimed eye surgeons in China, who made headlines when he left the reputed Beijing Tongren Hospital at the end of 2018 and founded Zhou Yuehua Myopic Doctor Group in Beijing.

"Leaving the public medical system gives me more room to pursue my dream career, and I hope to sign the best eye doctors to provide the best medical service," Zhou said.

About 1,090 group practices had been established by the end of 2018 in China, and nearly 700 are registered in Shenzhen in Guangdong province, where government policies are more supportive than in other places, according to a report jointly released recently by Vistamed, a healthcare industry publication, and a private hospital management research institute affiliated to the China hospital development institute of Shanghai Jiao Tong University.

Analysis of 20 of the top 100 group medical practices showed most of the founders are specialist doctors who used to work in top-level public hospitals, and more than half of the CEOs are doctors, according to the report.

The report said the Chinese authorities' ongoing efforts in healthcare system reforms, which enable doctors to practice with increasing freedom outside the public system, have given dynamic momentum to the growth of group medical practices.

It also predicted that the number of such practices in China would increase exponentially within three to five years, based on statistics from the American Medical Association which showed that nearly 70 percent of US doctors choose group practice.

Currently, group practices in China offer medical services to patients through public or private hospitals and facilities, and nonmedical services to medical entities to help them improve their academic, clinical and management performance.

Some group medical practices have already started establishing or managing hospitals and clinics, the report said.

Many doctors say they join group practice to provide patients with better treatment and to earn a higher income that is worthy of their medical services.

Zhang said he used to treat dozens of patients a day, but spent just a few minutes with each of them, at the noisy and crowded public hospital, where patients' privacy and feelings are often neglected.

Song, who used to be the chief physician of the neurosurgery department at Huashan Hospital affiliated to Fudan University, thought long and hard before making the decision to establish the practice thanks to government policy support, according to the website.

The practice has more than 10 specialists, and over 20 contracted surgery centers across the country.

It is also building a specialist hospital in Shanghai covering about 20,000 square meters, which will be in use in the middle of this year, it said.

Zhang's practice has also been developing and expanding smoothly.

The practice is now a single-specialty one focusing on ultra-minimal invasive treatment of varicose veins.

It has more than 10 established physicians in the field and revenue in 2018 increased by 150 percent compared to that in 2017.

The firm has built 12 vein disease centers across the country, including four wholly owned clinics. The others are operated in conjunction with local hospitals.

"We are expanding fast because we have standardized treatment procedures and criteria, and patients trust us and often recommend us to others," Zhang said.

About 30 percent of patients come through word-of-mouth, and many others seek help after they learn about it on social media, he added.

Zhang said the practice aims to become the world No 1 in terms of the number of operations treating varicose veins performed annually within three years.

That is because the demand for quality medical services is growing rapidly as Chinese people are getting richer and are willing to pay more, he said.

Most of the practice's patients are urbanites from middle and high-income groups, who are often well-educated and are selective about medical services, he said.