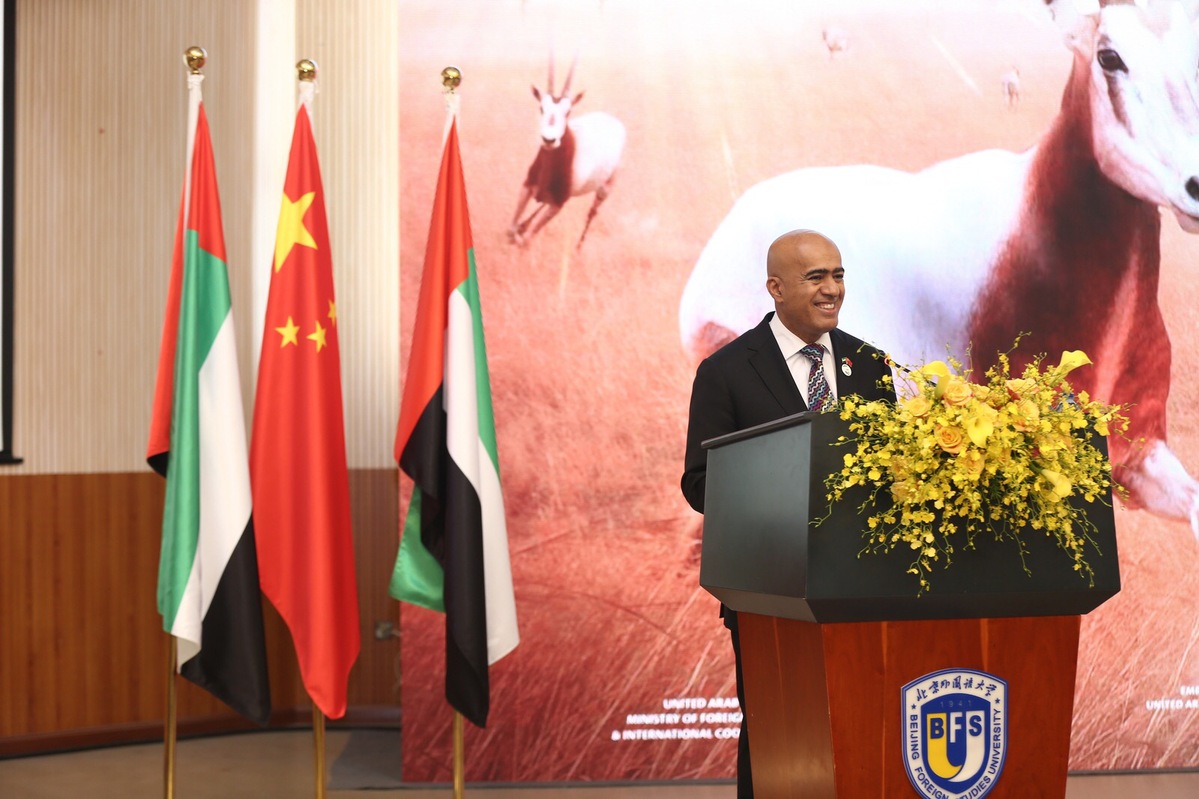 Imagine China without giant pandas or Australia without kangaroos.

This is the kind of loss that nations in North and Central Africa would suffer, if without the scimitar-horned oryx. The gazelle species, on the brink of extinction, is superbly adapted to the wild habitat of dry deserts in high temperatures that would kill most mammals.

A documentary about the wild release of 500 scimitar-horned oryx, the largest number for a mammal species to date, drew its first audiences in Asia on Thursday at the Zayed Center for Arabic Language and Islamic Studies of Beijing Foreign Studies University.

Under the patronage of Ali Obaid Al Dhaheri, ambassador of the United Arab Emirates (UAE) in China, the Asian premier won sustained applause from the audience and offered thoughtful reflections on global collective efforts, especially the enhanced cooperation between China and UAE, to protect endangered wildlife.

The documentary, Back to Wild, recorded the past decade of international efforts that finally had a total number of 500 scimitar-horned oryx – commonly seen through North and Central Africa in the past – roaming wild and free once more.

The gazelle species, named for their magnificent curved horns, went extinct in the 1990s, due to unregulated hunting, loss of habitat and lack of resources for conservation, according to Razan Khalifa Al Mubarak, secretary-general of the Environment Agency-Abu Dhabi.

The agency then spearheaded an initiative, called the Scimitar-horned Oryx Reintroduction, in partnership with the UAE, Africa, Europe and the US, with an aim to preserve the species through an approach to conservation involving reintroduction to the wild. It was in part inspired by the UAE's late founding father Sheikh Zayed bin Sultan Al Nahyan, who personally took care of a herd of oryx.

With concerted efforts, the campaign of collecting and airlifting the endangered species to an isolated natural reserve in Chad started several years ago. It finally released a healthy and viable population of up to 500 scimitar-horned oryx to the Oadi Rime-oadi Achim Game Reserve, with an area of 77,950 square kilometers, achieving the initial target.

It is imperative for countries across the world to coordinate on preserving wildlife, given that the longitudinal animal migrations involve different countries and regions, said Si Ping, head of the international cooperation office under the China Wildlife Conservation Association.

"Multinational cooperation will also play a vital role in cracking down on wildlife-related smuggling, especially in the digital age when online transactions have boosted wildlife smuggling," Si added.

Zhou said he was deeply touched by the documentary on preserving the oryx, which led him to think more deeply about how to better conserve wildlife and the diversity of the global ecosystem. "I am looking forward to visiting the reserve in Chad, and creating more opportunities for mutual learning and cooperation in this field," said Zhou.

The documentary was produced by Image Nation Abu Dhabi, one of the leading media outlets in the Middle East. "This film not only raised awareness about preserving endangered animals through reintroduction approaches, but also demonstrated the necessity of globally coordinating efforts to achieve the UN's 2030 Agenda for Sustainable Development," said a Chinese student surnamed Wang, who is studying the Arab language at Beijing Foreign Studies University.

Regarding future work in wildlife protection, Ambassador Ali Obaid Al Dhaheri said the UAE will stand with countries like China on initiatives including the Green Development Coalition, which is part of the Belt and Road Initiative.