Documentary shows heroes of the military 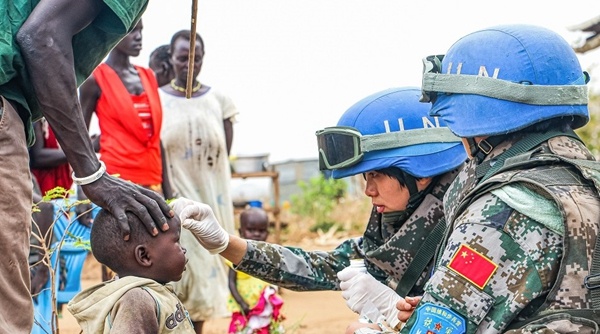 No matter "realistic", no matter how "true to life" is the highly acclaimed Chinese blockbuster Operation Red Sea or the US classic Black Hawk Down, filmgoers all know the gloomy scenes are "acted".

When a new documentary hit Chinese cinemas on Spet 18, even the experienced filmgoers of wartime productions will probably not be able to hold back their tears.

In The Blue Defensive Line, China's first feature-length production focusing on the country's UN peacekeeping mission, soldiers die right in front of camera, reminding people who live far away from war to cherish life and peace.

The documentary follows a Chinese infantry battalion with the United Nations Mission in South Sudan from 2015 to 2019, recording their devotion in protecting local civilians during the civil war in the African country.

On Douban, China's major film review website, the documentary got 8.6 points out of a total 10.

The soldiers voluntarily joined the mission. When they actually arrived in the country torn apart by war, difficulties they experienced went beyond their expectations.

"Many soldiers born after 1990 hadn't even fully learned how to take care of their own families," Lu Chengjun, a former commander of the battalion, also one of main roles appearing in the documentary, said at the premiere of the film in Beijing earlier this month.

"But through the mission in South Sudan, they learned how to take care of 'a big family'," he says. "They showed resilience and displayed patriotism."

However, tragic situations arose. In July 2016, a new round of conflict broke out around the UN camp. Peacekeeping soldiers from other countries chose to temporarily evacuate the war zone, but the Chinese battalion decided to remain because there were no orders to retreat.

Stray shots kept falling into their camp, and on July 10 that year, a shell hit an armored car on duty, killing two soldiers, Li Lei and Yang Shupeng.

This heartbreaking moment is captured.

Before the martyrs' bodies were escorted by UN vehicles from the camp, the commander insisted on holding a short memorial service, although it was not part of the protocol.

"It's impossible to buy flowers during wartime," he recalls. "But we had to give a dignified farewell for our brothers. We plucked all wild flowers we could find in the camp."

But their mission had to continue.

No voice-over, no deliberately set scenes or aroused sentiment, the entire film is plain portrayal. But warm moments are also included in the documentary.

Military medical workers offered humanitarian aid to the civilians. The off-duty soldiers talked with local children, and could still find hope as the young generation revealed their great expectations for the future. Some other soldiers took every opportunity to hone their English via bargaining in market.

"I feel I'm not a director," Zhou Dexin, director of the documentary, says. "I'm only a recorder of every touching moment. Chinese soldiers made us feel proud."

Though the director flew to South Sudan for several shoots, other content in the documentary was captured by the soldiers.

About 350 hours of such material was provided to Liu Xin, an assistant director of this film. Sitting in a studio in China, a deeply moved Liu figures out some storylines.

"I'm wondering who is behind the camera?" she recalls. "And I want to include him into the story as well."

That is why Fu Xiaofei, a soldier who daily recorded a visual log for the mission, becomes one of the main narrators in the documentary as well.

"I didn't expect this recording to be seen by so many people one day," Fu says. "It's just to keep some memory of my buddies, but when you review some unnoticed moments again, you can get strength."

According to Major General Yang Chaoying, former acting head of Missions in South Sudan, China has sent over 40,000 soldiers to 25 UN peacekeeping missions since its debut in the field in 1990, the most of the five permanent members of the UN Security Council. A total of 13 Chinese soldiers have paid the ultimate sacrifice.

"Peacekeeping missions have brought confidence to conflict zones," he says. "It's to fulfill our country's responsibility to the international community."