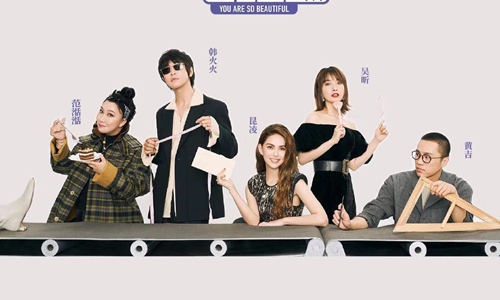 You are so Beautiful is a reality show aired by Chinese streaming platform Mango TV (MGTV) since December 19.

“The show’s five hosts each have a specialty, and they put them to use giving life makeovers to one person per episode. Sound familiar?” said a report by UK gay news service PinkNews published on January 9, citing viewers who accused the show of plagiarizing Queer Eye.

Queer Eye is a US reality TV series that premiered on the cable television network Bravo in July 2003. It was originally named Queer Eye for the Straight Guy.

The news caught public attention on Chinese social media after Bobby Berk, one of the Queer Eye host teams, collectively known as the Fab Five, tweeted the PinkNews report on Friday.

MGTV has not yet responded to the accusation of plagiarism.

Queer Eye season one in 2003 was rated 8.6/10 and the latest season in 2019 was rated 9.2 on Chinese IMDb-like review platform Douban on Monday. But You are So Beautiful was only rated 4.6/10 on the same platform on the same day.

Some viewers said they were touched by the hosts’ carefulness in picking out clothes and redecorating the houses for the guests, but some said the MGTV show had lost the core principle of the original version.

Queer Eye’s core value is self-identification and staying true to oneself. The so-called change in You Are So Beautiful is to help people become more confident just by living up to society’s standards, Peng Yanzi, founder of LGBT Rights Advocacy of China, told the Global Times on Sunday.

“Queer Eye tells stories of lovely people in the ordinary world, but this show tells me girls have to put on makeup and wear high heels. Who said so?” said a Douban user.

Three questions appeared at the very beginning of the first episode of You Are So Beautiful. “Do you think you are beautiful?” is the first one.

The show claimed they did a nationwide survey on life satisfaction and 89 percent of 3,000 female respondents thought they were not “good-looking.”

The hashtag “the value of You Are So Beautiful” has been viewed more than 200 million times on China’s Twitter-like Sina Weibo as of Monday.

Amid the controversy, Jiang Dingtian, a single woman who lives in Beijing and was the guest of the third episode, said on Weibo that she was happy to be on the show. “I see more possibilities, more colors and more love than I saw before.”

However, the criticism has continued, especially over the second episode in which a father of quadruplets complained that his wife rarely put on makeup and had little time with him because of their children.

The wife apologized to the husband at the end of the show for neglecting him, triggering a heated discussion among viewers, some of whom criticized the husband for not helping more to take care of the babies and only complaining to the exhausted wife.

Some netizens also said that some of the hosts, including MGTV hostess Wu Xi, have experienced unreasonable public judgment themselves, so it’s strange to see them promoting stereotypes to others in this show.

Wu featured in another MGTV show about young single women in January 2019. She was criticized by the audience as being lazy and for being unmarried in her 30’s.

“I always think that there is no right or wrong in lifestyle choices. Every individual is different; the most important thing is to follow your heart,” Wu once said on Weibo in response to the criticism.