After setting a new single day box-office record for the Chinese mainland with 1.44 billion yuan ($213 million) on Tuesday, the first day of the Chinese New Year, the seven-day Spring Festival holiday brought in an estimated total of 5.86 billion yuan, a 1.6 percent year-on-year increase from 2018's festival period. 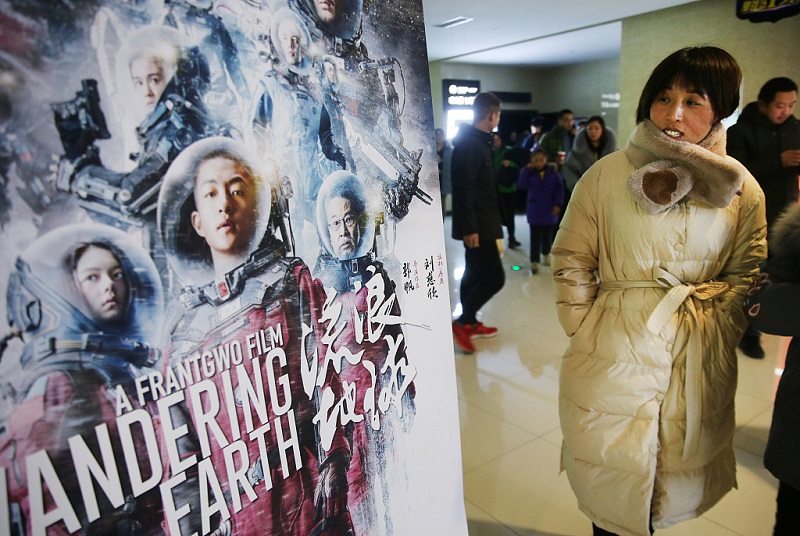 The biggest champions for the holiday were Chinese sci-fi films, whose positive performances are sure to influence future trends in the Chinese film industry.

Taking 1.9 billion yuan and 1.4 billion yuan respectively as of Sunday afternoon, sci-fi films The Wandering Earth and Crazy Alien have accounted for more than half of the total holiday revenue.

The Wandering Earth, an adaptation of Hugo Award winning author Liu Cixin's short story of the same name, only had a screen share of 11.4 percent on its opening day of Tuesday, yet its daily box office climbed to second place by Wednesday and to first place on Thursday, where it has remained despite polarized audience reviews.

The Chinese mainland's home-grown sci-fi blockbuster, The Wandering Earth also began a limited run in North America on Friday, even though director Frant Gwo told the Global Times that he considers the film "made for Chinese audiences" and not the international market. So far the film has a high grade of 8/10 on IMDb.

"America producers, eager to get their $200 million movies into the lucrative Chinese market, are increasingly looking for Chinese production partners, shooting in Chinese locations, and adding China-friendly characters and plotlines to American movies, even including extra scenes just for the Chinese cuts of films. But simultaneously, China and other countries are moving toward the blockbuster model themselves, creating homegrown films that don't need to involve American partners at all," The Verge wrote in its review of the film on Saturday.

While The Wandering Earth tackles Hollywood's familiar end-of-the-world genre head on, Crazy Alien stood out for its ability to mix Chinese-style comedy with Hollywood sci-fi tropes.

The film startS with a leading Western power contacting an alien to establish diplomatic relations, when the alien ambassador is accidently dropped onto the Earth and is mistaken for a monkey by a local entertainer.

The debut of two Chinese sci-fi films at the same time is not a coincidence. According to Gwo, a group of local directors, including himself and Crazy Alien director Ning Hao, studied in Hollywood years ago and were deeply impressed by the industrialization of film production there and aspired to adapt it to the Chinese market.

Following The Wandering Earth and Crazy Alien, another sci-fi blockbuster Shanghai Fortress announced on Friday that it will hit mainland theaters this summer.

This year, a total of eight new films opened on Tuesday, a significant increase from six in 2018 and five in 2017.

Writer turned director Han Han's car race comedy Pegasus grossed 1 billion yuan as of Sunday to take third place behind the two sci-fi blockbusters. According to a report from the Hollywood Reporter, CMC Pictures, which is distributing The Wandering Earth in the US, Canada and Australia will also distribute Pegasus in the US.

While Chow and Chan's films have been box-office hits for years, neither of the new films have lived up to expectations.

Compared to live action films, animated films often have an easier time breaking through national boundaries to be enjoyed by a larger audience. For this reason, recent years have seen several imported animations bring in big name Chinese stars to dub Chinese versions, while last year's Bonnie Bears film, Bonnie Bears: The Big Shrink, based one of its new characters on US actress Beth Behrs, who also voiced the character for the English version.

Looking to capitalize on the Year of the Pig, Chinese studio Alibaba Pictures Group joined forces with eOne, the company behind the Peppa Pig cartoon, to bring the character to Chinese theaters for the very first time.

"The idea came two years ago... eOne has produced a film using live action scenes threading together Peppa Pig animated episodes, which we found to be very interesting," Zhang Wei, president of Alibaba Pictures Group, which is distributing the film in the mainland, told the Global Times.

"By combining an international IP with Chinese traditional culture, we hope Chinese audiences can get to know the world better, while the world gets a better idea of China."