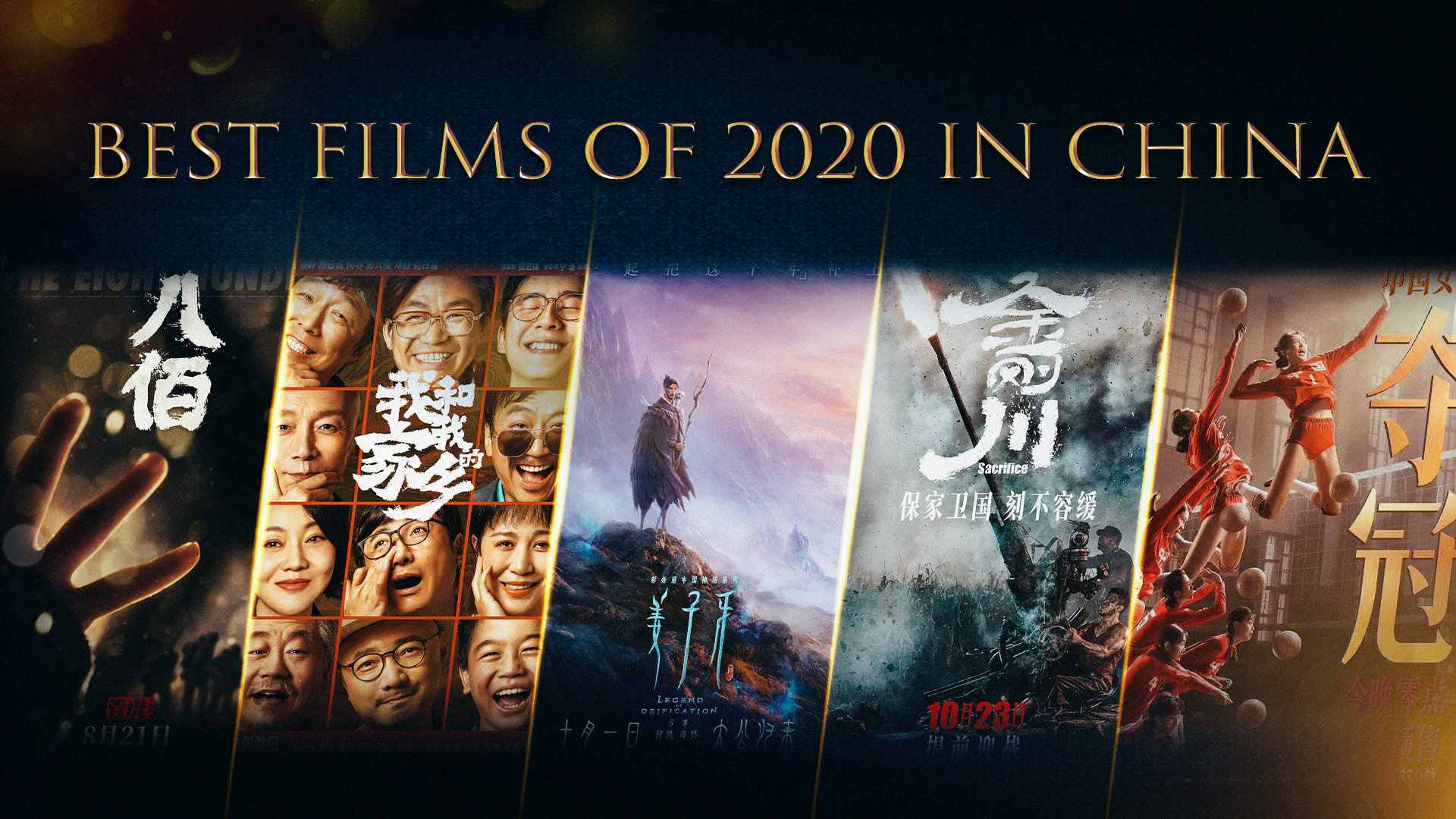 2020 has been a tough year on everyone, and the film industry is undoubtedly one of the hardest hit sectors by the COVID-19 pandemic. Dozens of filmmakers and producers have pulled the plug on their work this year as the coronavirus continues its inexorable spread worldwide.

China's box office took a heavy hit during the Spring Festival holiday in late January when cinemas nationwide shut down during one of the year's busiest times for movie operators. But with stringent epidemic prevention measures in place, the country saw its theaters reopen after a six-month hiatus to much fanfare and a slew of new releases.

As of 9:00 a.m. BJT on December 23, the domestic box office has raked in over 18.5 billion yuan ($2.83 billion) in 2020, with the top five titles, all domestic productions, contributing over half of the earnings, according to ticketing platform Maoyan. 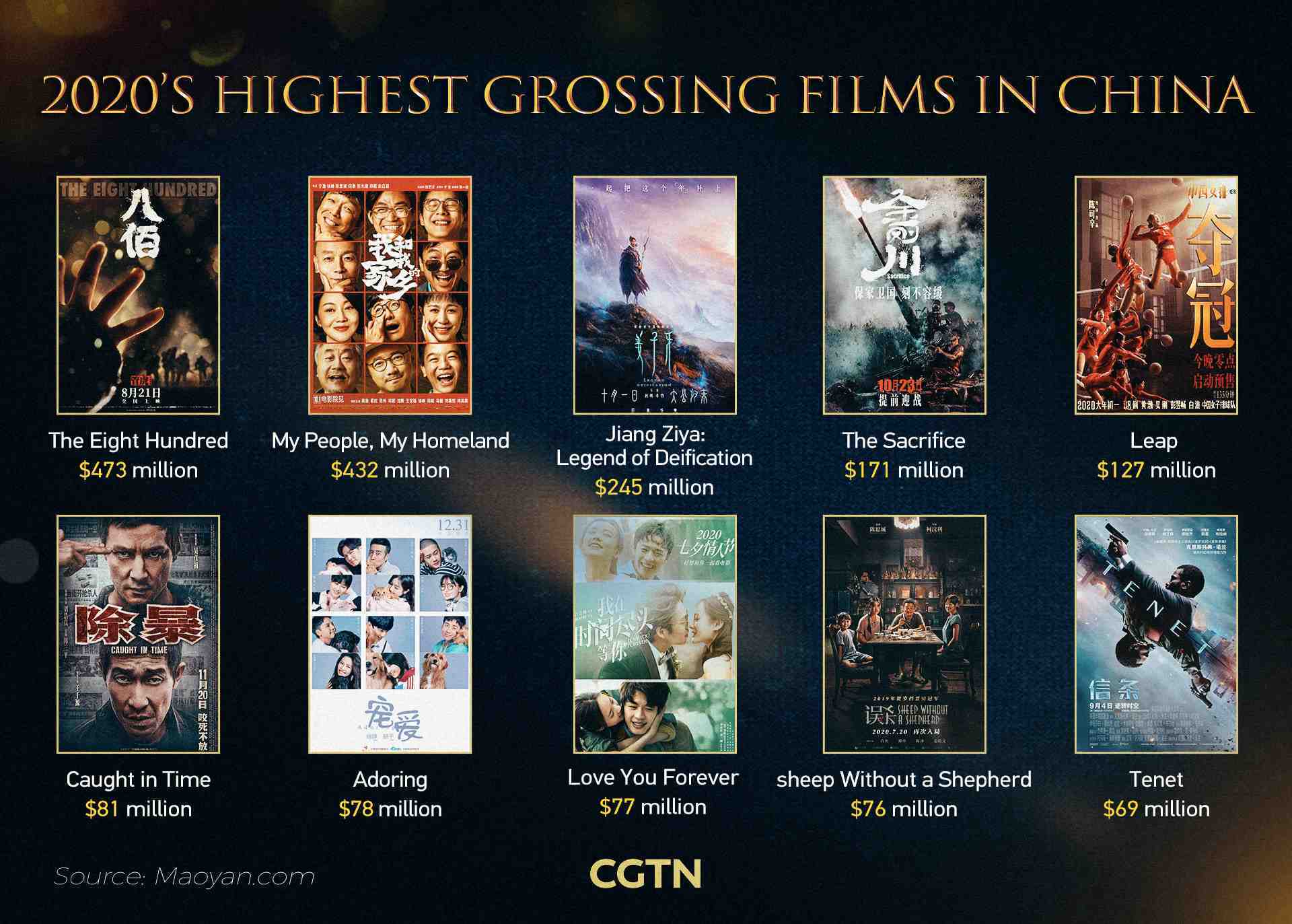 Eight out of the 10 biggest Chinese box office hits are domestic productions. The war epic "The Eight Hundred" tops the list, having pulled in over $473 million so far.

Coming in second place with over $432 million is the National Day holiday blockbuster "My People, My Homeland," which has sold around three million tickets since its debut. In third spot is Enlight Picture's feature animation "Jiang Ziya: Legend of Deification," also a National Day release, after netting $245 million.

The two smashers attracted more viewers back to cinemas during the Golden Week holiday in October, boosting the box office earnings to around 12.95 billion yuan ($1.93 billion) by October 15 and helping China overtake North America ($1.92 billion) to become the world's biggest movie market for the first time in history.

The biographical sports film "Leap" has been one of the best performers in the Chinese box office this year, grossing over $127 million and scooping up Best Picture, Best Cinematography and Best Screenplay at the 33rd China Film Golden Rooster Awards.

Directed by Peter Ho-sun Chan and starring A-list actress Gong Li as legendary volleyball coach Lang Ping, the movie recounts the story of the Chinese women's national volleyball team, depicting their endeavors over generations to win glory for the country, as well as the difficulties they've faced over time.

The war epic "The Eight Hundred" is undoubtedly this year's biggest winner. Directed by Guan Hu, the film is based on a real event known as the "Defense of Sihang Warehouse," which took place in the winter of 1937. It also marked the end of the three-month Battle of Shanghai during the Chinese War of Resistance against Japanese Aggression.

Another war epic "The Sacrifice," also known as "Jin Gang Chuan," ranked fourth in China's box office this year. The production was in commemoration of the 70th anniversary of the Chinese People's Volunteers Army entering the Democratic People's Republic of Korea to help in what is known in China as the War to Resist U.S. Aggression and Aid Korea. The film topped the Chinese box office for three consecutive weeks following its release on October 23. It is co-directed by Guan Hu, the same director of this year's blockbuster war epic "The Eight Hundred." 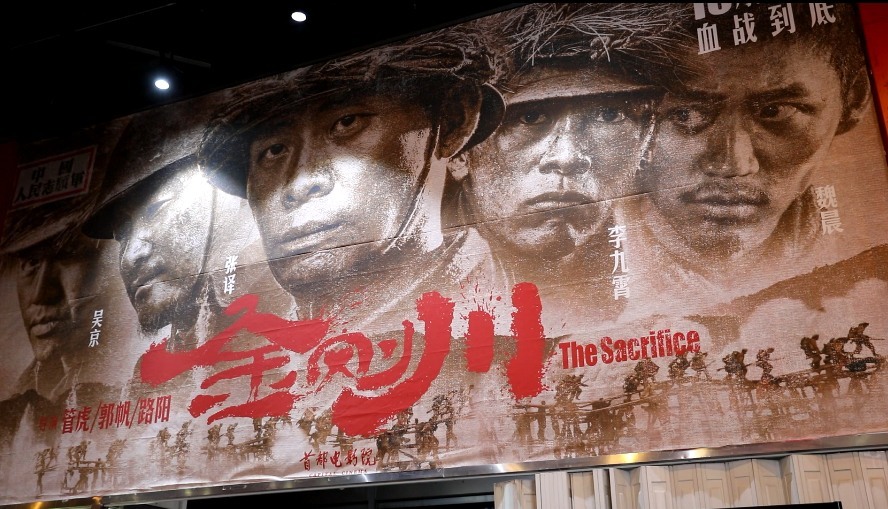 Film poster for "The Sacrifice". (Photo/CGTN)

What to expect next year?

"Detective Chinatown 3," the newest installment in the eponymous Chinese film franchise, tops the list of most-anticipated Chinese-language films for 2021, according to review sharing platform Douban.

Also on the list is the fantasy drama "The Yinyang Master" starring Chen Kun and Zhou Xun, which is scheduled for release during the same holiday.