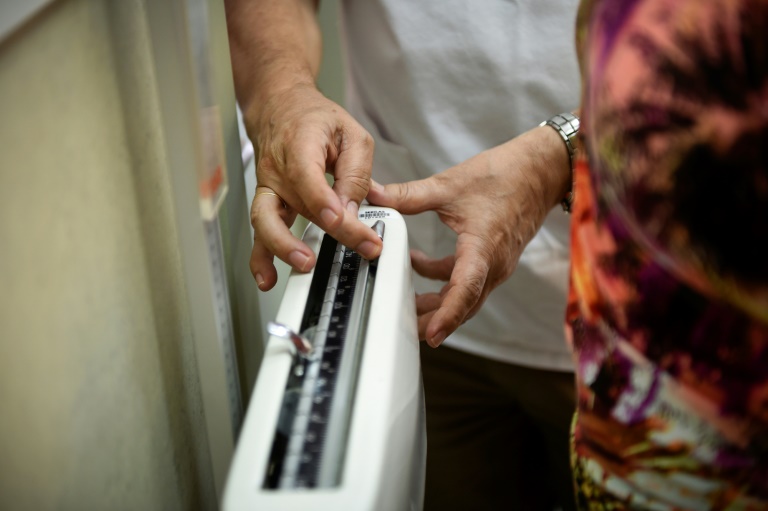 A report in The Lancet said being overweight can no longer be considered a rich country problem, nor undernourishment a preserve of the poor. (Photo: AFP)

Low- and middle-income countries risk seeing their development progress slashed by the double-edged sword of obesity and undernutrition, both caused by a lack of access to affordable healthy food, a report in The Lancet warned Monday.

This "double burden of malnutrition", or DBM, affects more than a third of some 130 countries classed as low-and middle-income, the report in the medical journal said.

More alarming, it is increasingly seen in the same household -- most commonly an overweight mother and a child stunted by undernutrition living under the same roof.

Both forms of malnutrition are linked to health problems and premature death, weighing heavily on a country's health system and labour productivity.

The report, compiled in collaboration with the World Health Organization, said being overweight can no longer be considered a rich country problem, nor undernourishment a preserve of the poor.

"While more than 149 million children have stunted growth, childhood overweight and obesity are increasing almost everywhere, and suboptimal diets are responsible for one in five (22 percent) adult deaths globally," it said.

"The economic, social, and environmental costs of inaction will hinder the growth and development of individuals and societies for decades to come," it warned.

Nowhere has the prevalence of DBM grown more than in the poorest countries, the report found, mainly reflecting a rapid rise in overweight people adding to the long-standing challenge of hunger.

It pointed to the rise in cheap, satisfying foods high in salt, sugar and fat, combined with a "major reduction" in physical activity at work, at home and in transportation.

The report said DBM was a feature in up to 35 percent of households in some countries, with the highest levels in Azerbaijan, Guatemala, Egypt, Comoros and Sao Tome and Principe.

Sometimes DBM is even measured in a single child -- a combination of overweight and stunted development due to lacking nutrients. This rate was highest in Albania, at 15 percent.

"Offsetting the effects of any ultra-processed food is difficult -- eg. by drinking a 355 ml bottle of sugar-sweetened beverage, the consumer would be required to undertake a 1.5-mile (2.4-kilometre) walk or run for at least 15 minutes."

A trial conducted by the US National Institutes of Health, it added, showed that adults of normal weight lost 0.9 kilogrammes (two pounds) when given a healthy "real food" diet for two weeks, and gained the same amount when fed ultra-processed foods.

In Latin America and the Caribbean, sales of packaged, processed food increased from about 10 percent of all food bought in 1990 to 60 percent in just ten years.

Steps could include subsidies for healthy foods, providing nutritious meals at schools, and food education -- including promoting the inexpensive and nutritious option of breastfeeding infants.