CULTURE Down and out Down Under, US seem vulnerable for World Cup

Down and out Down Under, US seem vulnerable for World Cup 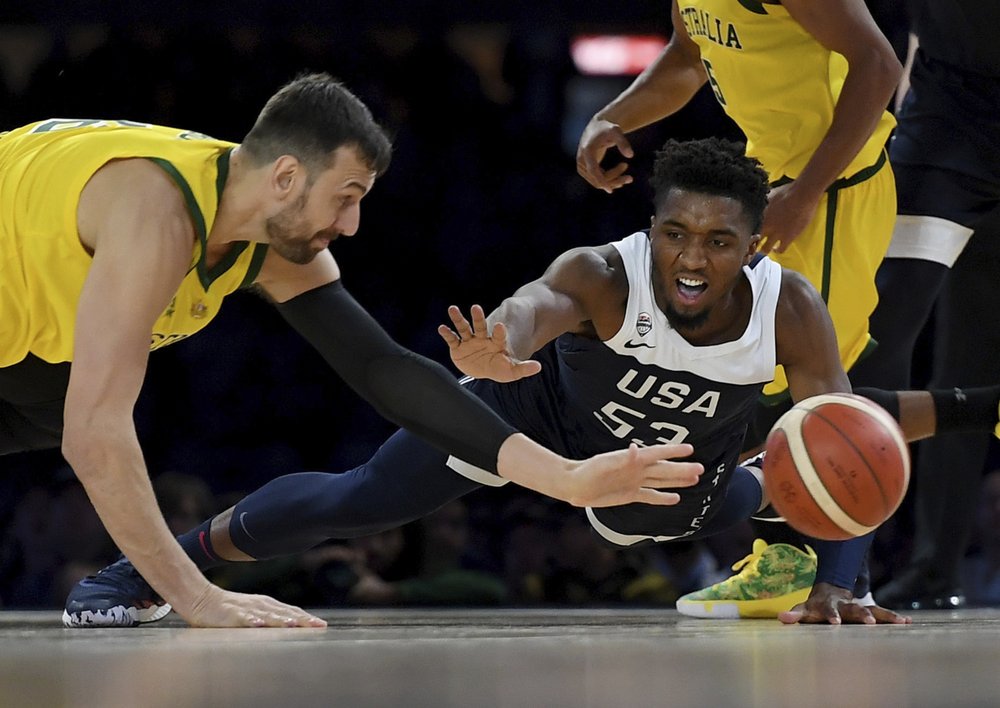 The US men’s basketball team had never lost to Australia. It had gone nearly 13 years without losing a game with an NBA-stocked roster. It was in the midst of the longest winning streak in team history.

The Americans went Down Under, and went down.

Australia beat the US 98-94 before a crowd of more than 52,000 in Melbourne, an outcome that ended the Americans’ 78-game winning streak and cast major doubt on the team’s ability to capture a third consecutive World Cup in China.

The last time the Americans — counting major international tournaments and exhibitions with NBA players on the floor — lost a game was the semifinals of the 2006 world championships. The program has won gold in every competition since, including three straight in the Olympics and two consecutive World Cup titles.

“It’s a friendly so we want to keep it in context,” Australia center Andrew Bogut said. “But we did make history tonight, the first senior men’s Australian team to beat an American team.”

Popovich said all the right things after the game. He lauded the Australian players and those tasked with putting their team together. He raved about Patty Mills, who scored 30 points to lead the Boomers to their biggest win. He good-naturedly vowed that when he and Mills get back to San Antonio, where they’ve been together as coach and guard for the last eight years, he will find a way to exact revenge.

More seriously, though, he sounded an alarm for the Americans.

“The loss means that we need to play better,” Popovich said. “It’s a measure of who you are.”

And who they are is still to be determined.

The US has played three exhibitions on their pre-World Cup tour, and Popovich has used three different starting lineups. The rotation is not clear, not even to the coaches. Players — most never having been teammates until this month — are figuring out their individual roles and the broader scheme.

“I think when you look at international play, every team, they kind of have their calling card of what they fall back into, their system, their sets,” US forward Harrison Barnes of the Sacramento Kings said. “For us, we’re still getting to that point.”

There’s time for that. A little time, anyway.

The final exhibition for the Americans is Monday against Canada in Sydney. Once the US gets to Shanghai, its first three World Cup games shouldn’t be overly taxing — the Americans are ranked No. 1 in the world while group opponents Turkey, the Czech Republic and Japan are ranked 17th, 24th and 48th, respectively.

From there, the tests figure to ramp up quickly. Serbia, France, Greece, Spain and now the Australians all arrive in China as legitimate title hopefuls. With most of the top US stars from the NBA like LeBron James, James Harden, Paul George and Stephen Curry sitting out this summer, the rest of the world clearly isn’t stuck playing for second place.

“You can learn as much or more from losing as winning,” Popovich said. “We’re all used to winning and losing. The USA has been a little bit different over the last 12 years — they’re only used to winning. So hopefully we can get back on that track.”

Since training camp started three weeks ago in Las Vegas, Popovich has expressed concern about the task of molding individuals into not just a cohesive unit but one good enough to win the World Cup.

He warned it wouldn’t be easy.

“This is a group of guys that’s worked very hard to get to know each other and get to know a system,” Popovich said. “And whatever comes, we can handle. Our job is to try to get better every day and we learned some things tonight. We’re actually a better team now than at the start of the game because of the knowledge that we gained. So you move on.”