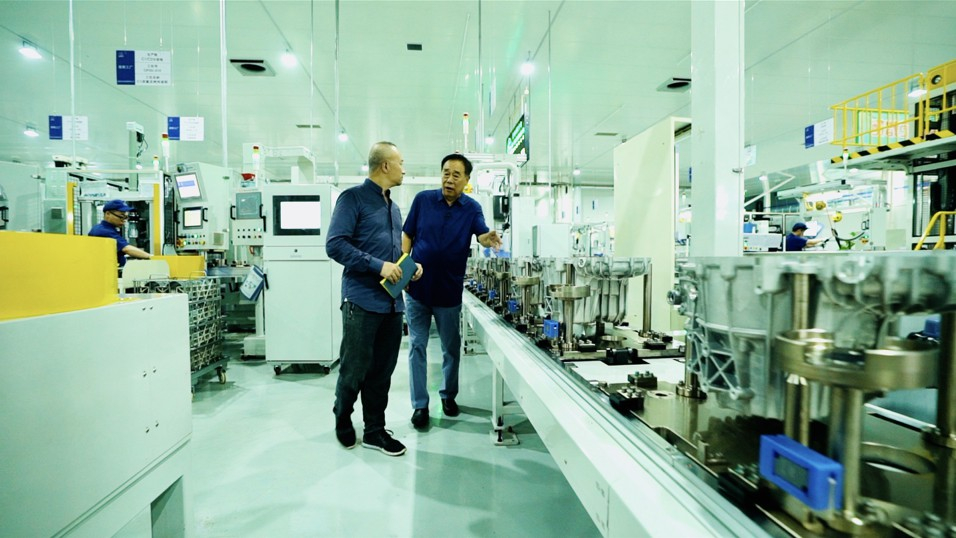 Liu Xiangwu shows a CGTN correspondent the newly developed plug-in hybrid gearbox. The hybrid can get 100 kilometers per 1-2 liters, while conventional cars use 10 liters. (Photo: CGTN )

China plans to eventually phase out gas-powered vehicles, as pollution control is becoming one of the top priorities. It is investing in low-carbon transport, to make its cities cleaner, and encouraging residents to buy electric vehicles (EVs).

Liu Xiangwu, chairman of the Shengrui Transmission Co. said EV cars in China are not profitable for the time being, but that doesn't mean auto companies should ignore the technology ready for the future market. It's often a balancing act.

His company is an engine parts supplier, with its leading technology in the 8AT automatic plug-in gearbox. But this advantage won't secure profits for long, as China's auto industry is going electric.

"We expect hybrid plug-in EVs will be the mainstream of the Chinese market in the coming 20 to 30 years. Of course, we will develop pure electric gearboxes in the next step," said Liu.

Though sales growth is not promising, competition is heating up in the market. China is committed to having its companies at the forefront of the future of transportation.

"With China's advantage in leading technologies in AI (artificial intelligence) and the Internet, China may have a chance to stand on the same level with advanced countries. In the future, new energy vehicles will not only become a means of travel but also a way of life," said Kong.

China is targeting some two million annual EV sales by 2020. This transformation may go beyond saving oil or making the sky clean. The commitment is having a huge impact on the car industry. The country is still a major polluter, but it's moving beyond being commercially driven.