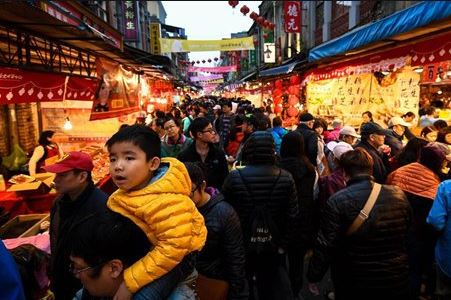 TAIPEI, Aug. 27 (Xinhua) -- The population of Taiwan saw negative natural growth for the first time in the first six months of this year due to a decreased birth rate compared with previous years.

The latest reports showed a total of 88,098 people died in Taiwan from January to June this year while only 86,961 infants were born.

Local media said if this trend continues in the second half of this year, Taiwan's natural population growth for the year 2019 could turn negative, earlier than the previous forecast of 2020.

Local authorities said the island's advantage of a strong labor force will completely disappear in 2027, posing a major threat to its economic competitiveness.

Experts said the situation might improve because, typically, more babies are born in the second half of each year and this year's rate may not indicate a long-term trend.

Figures showed a total of 181,000 babies were born in Taiwan in 2018, 7.2 percent fewer than in the previous year. Women on the island now also tend to give birth to children at an older age, compared with 10 years ago.

Meanwhile, health authorities said in a recent report that the number of people aged above 65 accounted for 14.6 percent of Taiwan's total population in 2018, meaning it has become an aged society. The proportion is expected to reach 20.7 percent by 2026.

The aging population has pushed up the number of cases involving real estate inheritance. Figures from the interior authorities showed the number of properties inherited or transferred in Taiwan reached a record high of 28,100 in the first half of this year.

The reduced birth rate has also affected schools. A total of 125,492 students in Taiwan have enrolled in high schools, leaving nearly 80,000 vacancies in such schools' enrollment target for this year, according to the island's education authorities.

Authorities also expect the number of new enrollments in high schools to continue to drop in the coming years, with particular impact on private schools.

Education authorities in Taipei said they have been downsizing school classes to 36 students from 40 since 2013. Starting in 2020, public senior high schools and vocational schools in the city will further cut the number of students for each class to 35.

In the meantime, having fewer children has allowed parents to better prepare for their future. According to the Taipei Fubon Bank, nearly 250,000 bank accounts have been opened for children, with an average amount of 380,000 new Taiwan dollars (about $12,100) for each account. Over 30 percent of the account holders are children under five years old.