He's Kevin Durant, and the Los Angeles Clippers got reminded of it. 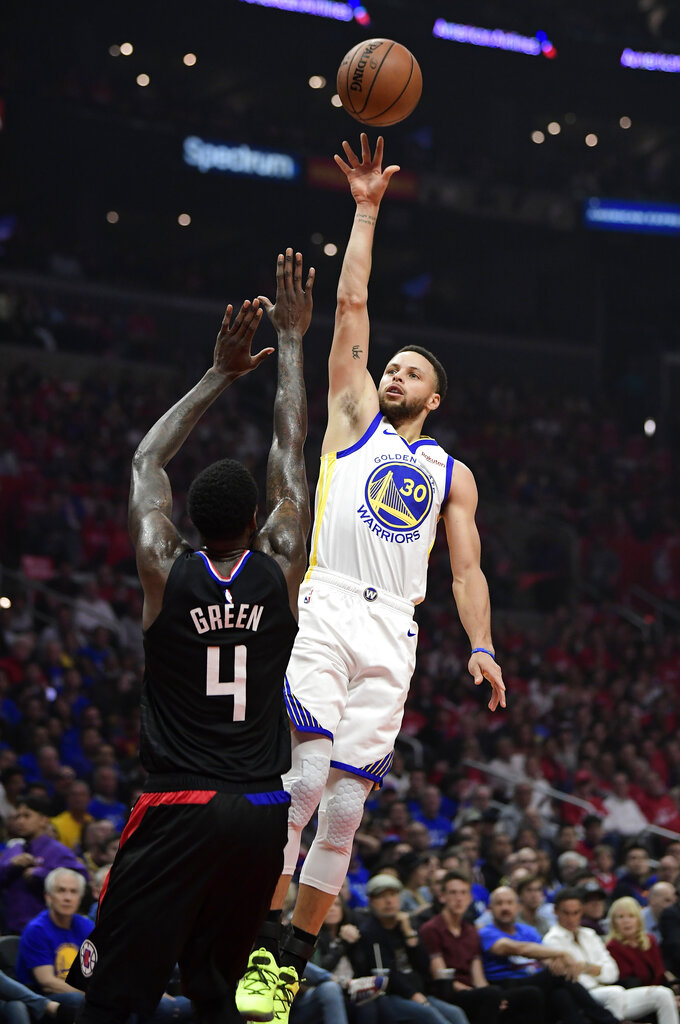 Durant scored 38 points, Stephen Curry added 21 playing with five fouls, and the Golden State Warriors dominated from the opening tip to win 132-105 Thursday night and take a 2-1 lead in their first-round playoff series.

"He came out super-aggressive, in kill mode," teammate Draymond Green said of Durant. "That was all the difference for us. We took control of the game right there in the first quarter and never lost control of it."

The Warriors began the game on a 22-9 tear and went on to shoot 73% from the floor in the first, taking the crowd out of it early.

Durant was perfect, making all five of his field goals and both free throws for 12 points. He and Curry picked up two fouls each, but the Warriors still built a 19-point lead.

"As much momentum as we lost in the final 16 minutes of Game 2, we got it all back early," Curry said. "Everybody was aggressive, decisive, getting good shots on every possession. The way we went about our business was the sign of a resilient team."

Game 4 is Sunday at Staples Center.

Kevon Looney, again filling in for injured DeMarcus Cousins, shot 4 for 4 in the first, dunking three times in a row.

Durant had 27 points at halftime despite not making a 3-pointer.

Golden State coach Steve Kerr had said he wanted Durant shooting much more than the eight times he did in Game 2. When relayed his coach's comment earlier in the week, Durant replied, "I don't play like that. I'm Kevin Durant. You know who I am."

The Clippers won Game 2 on the road after trailing by 31 points in the third quarter, stunning the Warriors with the largest comeback in NBA playoff history.

But they couldn't find the basket this time, shooting 37% from the floor.

"They dissected us," Clippers coach Doc Rivers said. "You kind of felt they were going to come in and throw a punch, and we just didn't respond."

The Clippers' only starter in double figures was rookie Ivica Zubac, who finished with 18 points after playing most of the fourth. Patrick Beverley, a defensive pest guarding Durant in Game 2, was limited to six points, four fouls, one rebound and no assists in 18 minutes.

Lou Williams had 16 points, and Montrezl Harrell and JaMychal Green added 15 each off the bench.

Los Angeles never led and failed to put together any kind of sustained run.

Golden State's biggest run came in the third at the same time Curry was whistled for his fourth foul. The Warriors scored 14 straight points to lead 88-57. Durant and Green got hit with offsetting technicals during the spurt. Durant laughed it off and sank a jumper from the left corner seconds later.

"We were conversing about the play that happened before. Somebody came out of nowhere and checked us both," Durant said. "That was pretty quick. Hopefully they rescind that one because I don't want anybody to think that somebody's in my head, that's why I got that tech."

The Warriors extended the margin to 35 on Alfonzo McKinnie's 3-pointer late in the period.

Clippers: Kentucky coach John Calipari sat in the second row to support his former player Shai Gilgeous-Alexander, who finished with seven points. ... Floyd Mayweather, Meek Mill, Scottie Pippen and Sheila E. with her dad Pete Escovedo were in the crowd.

The Warriors set an NBA record by winning at least one road game in each of their last 20 playoff series.

"I took a little vacation in the second half." — Curry on his foul trouble.

The $2,000 that Rivers dropped on the street in San Francisco earlier in the week was his per diem while on the road. A man picked up the dough and caught up to Rivers to return it.

"They give you cash these days," the coach said. "Maybe we need to go back the other way."

Game 4 is Sunday in Los Angeles.