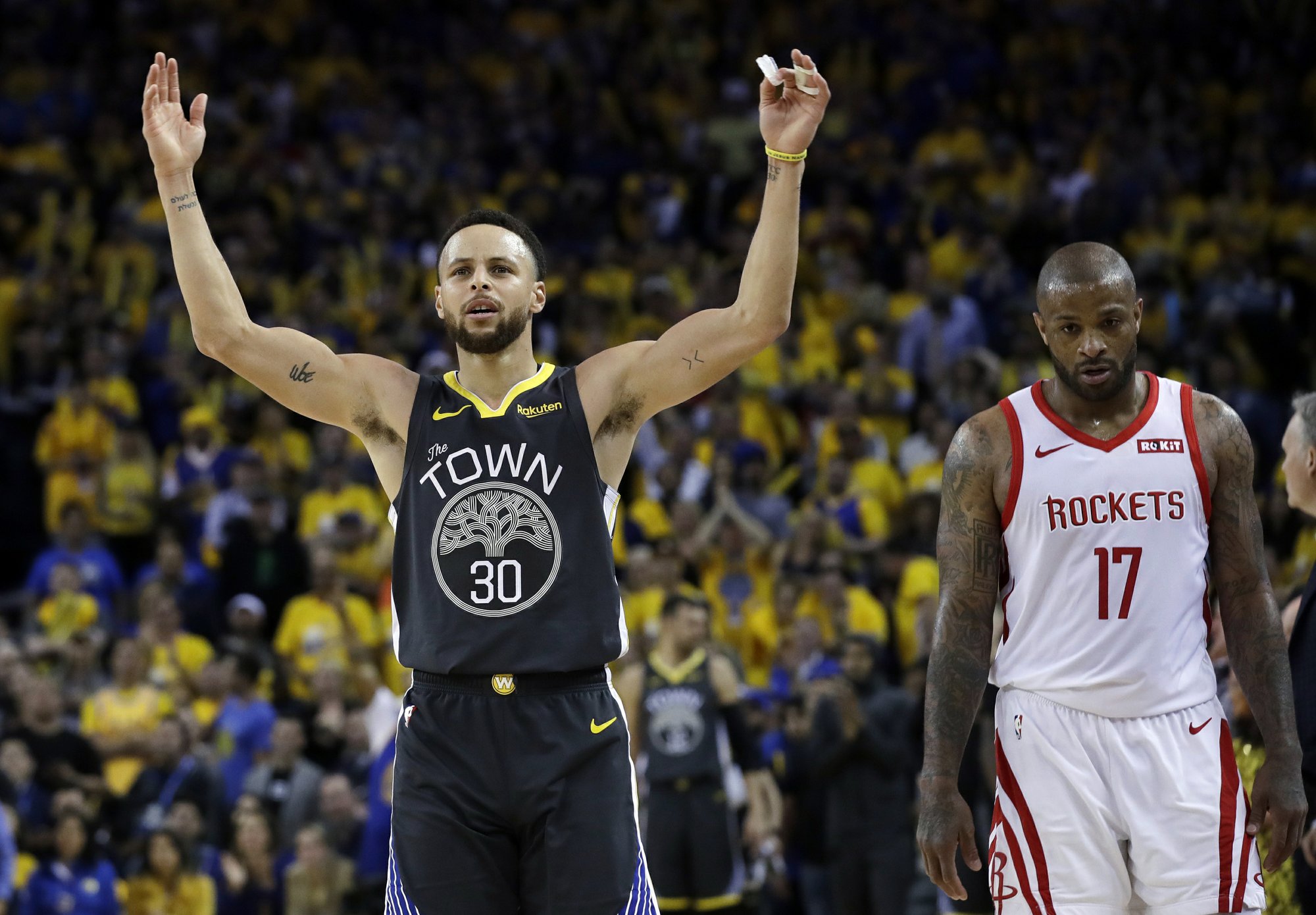 Kevin Durant and the Golden State Warriors brought it on both ends, kept their mouths shut and handled business at home against James Harden and the Rockets.

Now, the two-time defending champions are headed to Houston with a 2-0 lead in the Western Conference semifinal.

Durant scored 29 points and established an early defensive tone against Harden, leading the Warriors past the Rockets 115-109 on Tuesday night as the focus refreshingly returned to basketball after two days of constant chatter about the officiating.

“Tonight I think it was a great officiated game,” Golden State’s Draymond Green said. “They let us be physical, both teams, and they made the calls they needed to make. It was kind of disheartening for a game that I love since I was a child to see the talk over the last two days was nothing about basketball and everything about foul calls. Is that what this game is coming to?”

“I barely could see,” said Harden, who was treated with eye drops.

Boos regularly greeted both Harden and Chris Paul at deafening Oracle Arena, where the Rockets complained after a 104-100 Game 1 defeat that the officials missed foul calls when the Warriors closed out on Houston’s 3-point shooters.

Paul celebrated and cheered when Harden drew a foul on Durant in the closing seconds of the third on a very such play. Harden converted three free throws to pull Houston within 82-75 going into the final 12 minutes.

Harden scored seven straight Houston points during one stretch midway through the fourth, including a 3 at 7:25 that go the Rockets within 92-89. Stephen Curry connected for a key 3 at the 6:31 mark on the way to 20 points.

Harden’s eyes were still red and bothering him postgame.

Klay Thompson scored 21 points and hit consecutive 3-pointers late in the third. Green had 15 points, 12 rebounds — three on the offensive end over two possessions in the opening quarter — and seven assists.

Game 3 is Saturday in Houston.

Players on both sides stayed poised with cool heads.

“I felt like both teams, both coaches, just let the refs do their jobs all night,” Durant said. “I think the refs did an amazing job, the players did a great job, and the coaches.”

Durant set a tone when took an early charge from Harden and blocked one of his shots as Houston committed five quick turnovers that led to 10 points. Andre Iguodala, who also handled much of the load defending Harden, added 16 points, five rebounds and four assists.

Curry dislocated his left middle finger in the first quarter but X-rays were negative and he returned with it taped.

Curry missed his first four 3-point tries before hitting late in the first and played in foul trouble once more. He picked up his fourth with 6:43 in the third on a reach in, something he’s been working to stop doing.

Harden injured his eyes with 6:39 left in the first, grabbing at his face after he and Green fought for a loose rebound and Green’s left hand got Harden in the face.

When Harden went to the locker room with 6:27 left and a towel over his left eye for a cut, Green patted him on the back and checked to make sure he was OK. Harden returned at the 7:09 mark of the second.

“That’s him. I didn’t have a doubt he was coming back unless it was something catastrophic,” coach Mike D’Antoni said.

Both teams were more composed when it came to mouthing off at the referees.

Harden already had a history with official Scott Foster, who worked Tuesday’s game. The reigning MVP was fined $25,000 for calling Foster “rude and arrogant” following a 121-111 loss at the Lakers on Feb. 21 in which Harden fouled out.

In Game 1, Paul was automatically ejected with 4.4 seconds left following a second technical and fined $35,000 by the NBA on Monday for making contact with official Josh Tiven.

With 201 points over his previous five games, he became the fourth player in NBA history to score 200 or more in such a span — joining LeBron James, Allen Iverson and Michael Jordan.

Green and Nene got tangled up and drew double technicals after Harden’s third free throw at the end of the third.

With his fourth technical of the postseason, Green is three away from an automatic one-game suspension.

The Warriors plan to reach out to the league about getting the technical rescinded because coach Steve Kerr considered it one of those intense plays that happen in the postseason.