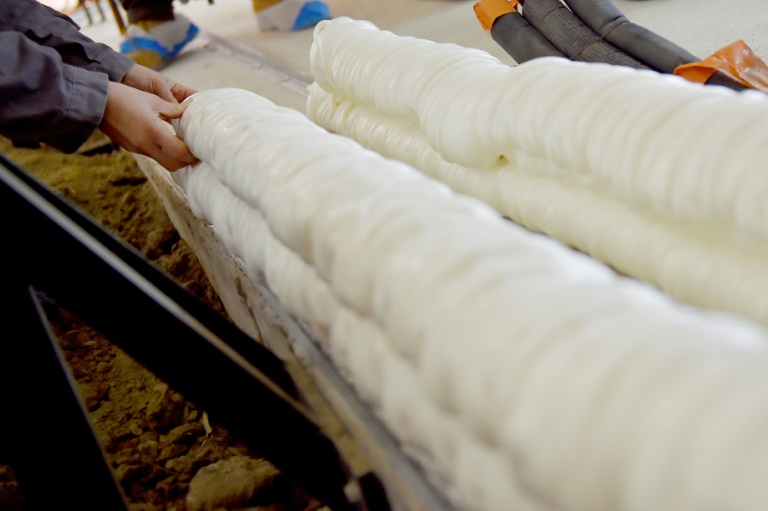 A 3D-printed housing complex planned for the Netherlands in 2019 follows a 3D-printed house constructed in France at the University of Nantes, seen being built in 2017 (Photo: AFP)

The southern Dutch city of Eindhoven plans to unveil the world's first 3D-printed housing complex next year, which its inventors believe could revolutionise the building industry by speeding up and customising construction.

Printed in concrete by a robotic arm, the project backed by the city council, Eindhoven Technical University and several construction companies aims to see its first three-bedroomed home go up by June 2019.

Known as Project Milestone, a housing complex of five homes of various shapes and sizes will be built over the next three to five years, financed by private investors, said Rudy van Gurp, one of the project's managers.

"This is just the beginning. It's revolutionary technology and a new way of building that will develop over time," he told AFP on Thursday.

One of the great advantages of 3D-printing is that the pod-like homes can be completely customised -- and even built around natural objects, said Van Gurp.

"Everything is possible, we can exactly fit the design to the area. We are guests in nature," he told AFP.

Apart from speeding up the building process -- from months to weeks -- 3D-printing also solves another pressing issue: the scarcity of skilled artisans in the Netherlands, which drives up prices.

"In a few years we will not have enough craftsmen like masons for example. By introducing robotisation into the construction industry we can make homes more affordable in the future," said Van Gurp.

Currently the technique is still more expensive than traditional methods, prices are set to come down as 3D technology improved, he added.

Using 3D-printing "people have more influence on the design of their house and the way it is built," Eindhoven's deputy mayor Yasin Torunoglu told AFP.

"It will change the market and I guess it's a game-changing innovation," he said, as 3D-printing continues to improve and become more popular.

Recently in France, the University of Nantes unveiled a single 3D-printed home which now serves as social housing.

The Netherlands in October 2017 unveiled the world's first 3D-printed bridge in Amsterdam.