The Egyptian Ministry of Antiquities announced on Thursday the discovery of a large 3,500-year-old tomb on the Nile River's west bank near the Valley of Kings in Upper Egypt's monumental province of Luxor. 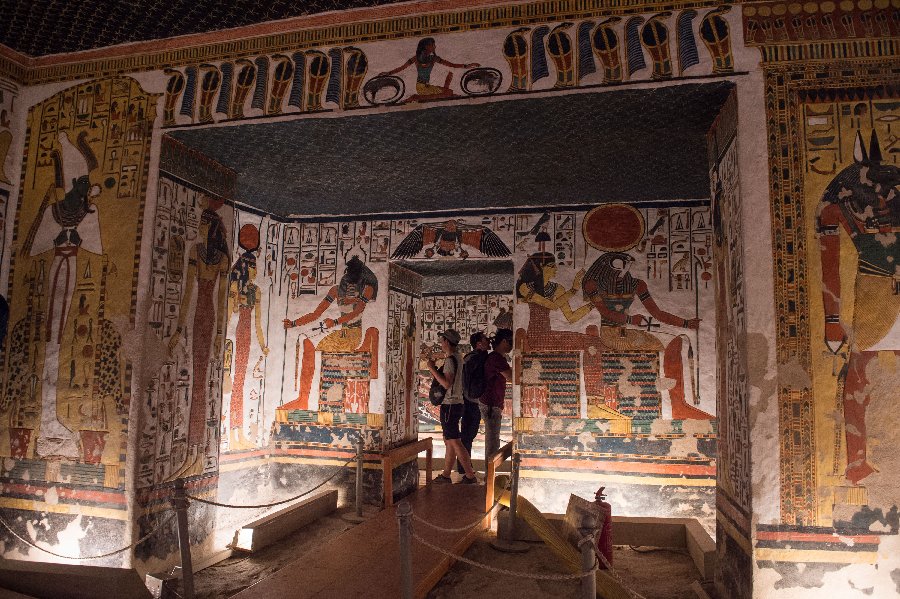 The mural paintings inside the tomb of Nefertari, the wife of ancient Egypt's Pharaoh Ramesses II on April 18, 2019, at Valley of the Queens in Luxor, Egypt. Discovered in 1904, the tomb is famous for its mural paintings with vivid colors . (Photo: Xinhua)

Located on a hill at Draa Abu el-Naga necropolis, the rock-cut tomb, or "saff" tomb as known in Egypt, has 18 entrances. It belonged to a man called Shed Sou Djehuty, who was a prince, a mayor and a royal seal holder in ancient Egypt. He might have served under King Thutmose I who ruled Egypt about 3,500 years ago.

"We celebrate the World Heritage Day by the announcement of this unique discovery. We have a very active excavation season this year as we have made several discoveries over the past few weeks," Egyptian Antiquities Minister Khaled al-Anany told Xinhua at the site, noting such discoveries boost cultural tourism in Egypt.

The announcement marks the World Heritage Day 2019, an international day for monuments and sites celebrated on April 18 each year since it was approved by the UNESCO in 1983.

The saff tomb was discovered after eight months of excavation by a team from Egypt's Supreme Council of Antiquities led by its secretary general Mostafa Waziri.

"This is the largest saff tomb with the largest number of entrances in the west bank necropolis. It is 55 meters wide with a total size of 550 square meters," Waziri told Xinhua outside the tomb, noting the tomb has two shafts with each about 11 meters deep.

He explained that the drawings on the entrance columns showed several ancient crafts such as making boats of papyrus, leather tanning, fish and bird hunting and others, adding six other smaller tombs were discovered beneath as an extension of Shed Sou Djehuty's tomb.

During the ceremony, the Egyptian ministry displayed in glass showcases some artifacts found inside the tombs, including a collection of ushabti statues, 50 funerary seals, a cartonnage funerary mask and other small objects.

A couple of wooden coffins recently discovered in nearby Assasif necropolis were also displayed during the event.

Later in the evening at Luxor Temple on the east bank, a large colossus of Ramses II is scheduled to be unveiled after its restoration and re-erection as part of the World Heritage Day activities.

Luxor, the ancient city of Thebes, was the pharaohs' capital at the height of their power during the New Kingdom from the 16th century BC to the 11th century BC. Seen by many as the world's largest open-air museum, it is home to famous Tutankhamen's tomb in the Valley of the Kings and the ruins of the huge Karnak Temple Complex and Luxor Temple.