Egypt's minister for antiquities has told China Daily his country supports China's efforts to repatriate its historical artifacts from around the world as countries with a rich cultural heritage have a duty to future generations to safeguard these items for their own people and humanity as a whole. 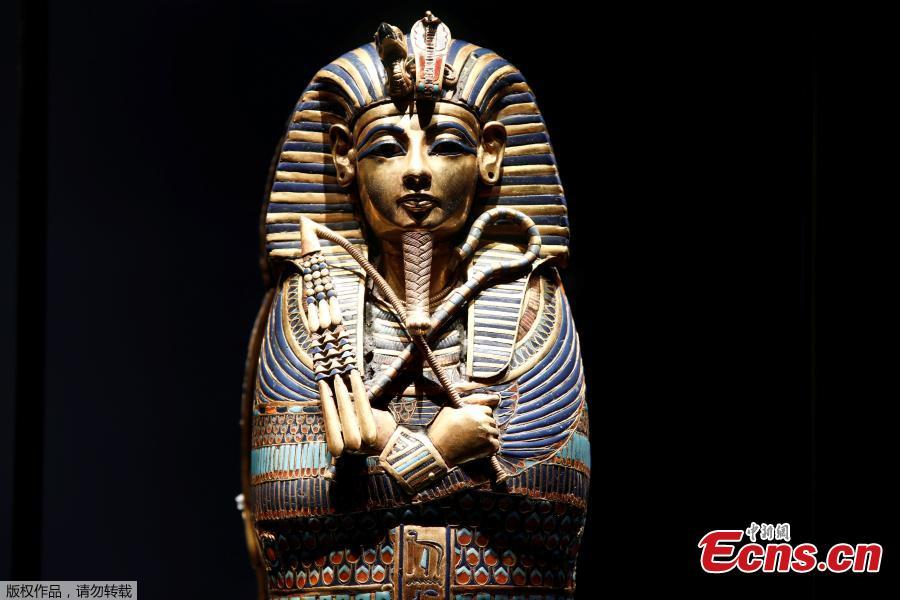 Khaled El-Enany was speaking at the launch of the exhibition Tutankhamun: Treasures of the Golden Pharaoh that will run at London's Saatchi Gallery until May. The exhibition coincides with the 97th anniversary of the discovery of the tomb on Nov 4, 1922, by an expedition led by British historian Howard Carter.

Its discovery made the boy pharaoh a household name around the world, a status that Tutankhamun still enjoys nearly 100 years later, and generated a global market for Egyptian artifacts, putting the country in a similar position to China, seeing much of its heritage sold to the highest bidder. An economically resurgent China has recently become extremely active in putting right this historical wrong, and El-Enany said Egypt fully sympathized.

"Nothing makes me more sad than watching auction houses selling antiquities, be they Chinese, Egyptian or from any other ancient civilization, for people to have them in their own palaces, so scholars, historians and tourists cannot see them," he said.

"This is very dangerous, so we will work hand in hand with China and other countries who have great civilizations. We want to defend that heritage and fight the illicit trade. Recently, I was invited by the Chinese authorities for a ministerial-level congress in Beijing later this month to discuss how we can work together to preserve international heritage and fight the illicit traffic in antiquities."

November also marks the first anniversary of the start of a cooperational archaeological dig by Chinese and Egyptian experts in Egypt, at Luxor. World-renowned Egyptologist Zahi Hawass, who has written 16 books about Tutankhamun, echoed the minister's comments about Egypt and China having a shared mission.

"I have a great admiration for the history of China," he told China Daily. "I met the vice-president of China inside Luxor temple and told him. Egypt is like China in that we suffer from a trade in illicit artifacts. I have had big fights with museums and individuals around the world, and have managed to bring back around 6,000 artifacts, but I still believe items like the bust of Queen Nefertiti in Berlin, the Rosetta Stone at the British Museum in London, and carved zodiac at the Louvre in Paris should come home to Egypt."

That is not to say, however, that Egypt is possessive about its artifacts and its heritage. Its ancient past is in fact its greatest modern asset. "Egyptian monuments belong to people all over the world, which is why we send this exhibition to London and around the world — it will bring tourists to Egypt," he said.

"This exhibition will continue to travel until around 2024, but after that, the boy king will never travel again. That is when the Grand Museum in Egypt, which I started building in 2005, will be complete. It is the most important cultural project in the world — but until then, we will let him go around the world so people who can never come to Egypt can witness it."

The traveling exhibition contains around 150 items from the near 5,000 pieces Carter found in the tomb's legendary treasure trove, which took nearly 10 years to remove and catalogue. Many of them have never traveled overseas before, and the task of designing the exhibition to tell the story of Egypt's most famous king falls to curator Tarek El Awady.

He told China Daily that to bring Tutankhamun to the land of Carter, particularly at the time of the anniversary of the discovery, was a special thrill, and with 250,000 tickets having been sold before the exhibition opened, it is clear that Britain's fascination with the pharaoh remains as strong as ever.

"What we, and countries like China, Greece and Italy have, is our own great heritage, but it is also human heritage, so all countries should stand together and fight the illicit trade," he said.

"These are not pieces of merchandise, something that it is ok to find on sale in a market, we believe these wonderful pieces are part of all our history and should not be in private collections in darkness, only for the enjoyment of the owner and their family. The only place for artifacts is in museums, to be accessible to everyone, and to add something to history."

And with the opening of the Grand Egyptian Museum in Cairo, the Egyptian who has so fascinated the world for the last 97 years will finally be given a home worthy of his reputation and stature.

"Due to lack of space, since Tutankhamun's tomb was opened, only about one-third of its contents have been on display at the Egyptian Museum in Cairo," he explained.

"The museum has more than 185,000 artifacts, and we're not talking about little pieces. This is great history for one museum to hold, so from that came the need for the Grand Egyptian Museum.

Finally, for the first time since it was reopened, all the treasures of the tomb of Tutankhamun will be on display in one place, so visitors from all around the world can come to see the beauty and hear the story of the excavation.

"We have a very heavy heritage, and a duty to protect it and preserve it. Egyptian history needs a grand museum. Now it is getting it."