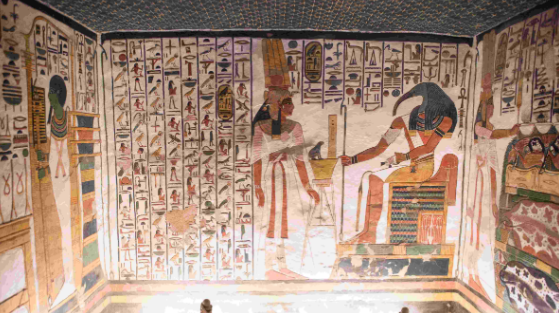 The mural paintings inside the tomb of Nefertari, wife of ancient Egypt's Pharaoh Ramesses II at Valley of the Queens in Luxor, Egypt, April 18, 2019. (Photo: Xinhua)

The Egyptian Ministry of Antiquities opened Opet Temple for the first time for visitors on Friday after its recent restoration at Karnak Temple Complex on the Nile River's east bank in Upper Egypt's monument-rich province of Luxor.

Antiquities Minister Khaled al-Anany and Tourism Minister Rania al-Mashat inaugurated the temple in a ceremony witnessed by Mostafa Waziri, head of Egypt's Supreme Council of Antiquities, and a number of Egyptian parliamentarians, celebrities and public figures, as well as foreign diplomats.

"The temple was first built during the New Kingdom under the reign of the 18th Dynasty and was completed in the Late Period and the Ptolemaic Period, a few centuries BC," said Mostafa al-Saghir, director-general of Karnak temples in Luxor.

He pointed out that the temple was dedicated to the worship of hippopotamus goddess Opet, the diety of protection in ancient Egypt "who was also considered the torchbearer goddess that lit up the afterlife darkness."

Opet Temple is characterized by its unique and colorful inscriptions, which were covered by soot that has been carefully removed during the restoration process, according to Saghir.

The inauguration of the temple is part of Egypt's celebration of the World Heritage Day, an international day for monuments and sites celebrated on April 18 each year since it was approved by UNESCO in 1983. 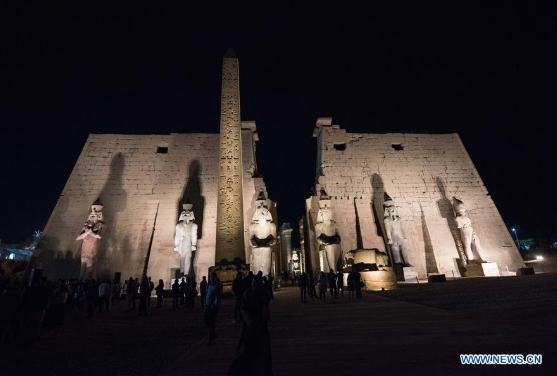 A 12-meter-tall statue of ancient Egyptian King Ramesses II together with five other statues are open to the public in Luxor, Egypt, April 18, 2019. (Photo: Xinhua)

On Thursday, Egypt started the World Heritage Day activities by announcing a newly discovered massive 3,500-year-old tomb with 18 entrance gates at the necropolis on the west riverbank in Luxor.

The rock-cut tomb, or "saff" tomb as known in Egypt, belonged to a man called Shedsu-Djehuty who was a prince, a mayor and a royal seal holder in ancient Egypt; he might have served under King Thutmose I some 3,500 years ago.

Later on Thursday evening, the Ministry of Antiquities unveiled a 60-ton, 12-meter-tall statue of ancient Egyptian King Ramesses II after its restoration and re-erection, standing next to five other statues at the pylon of Luxor Temple on the east riverbank.