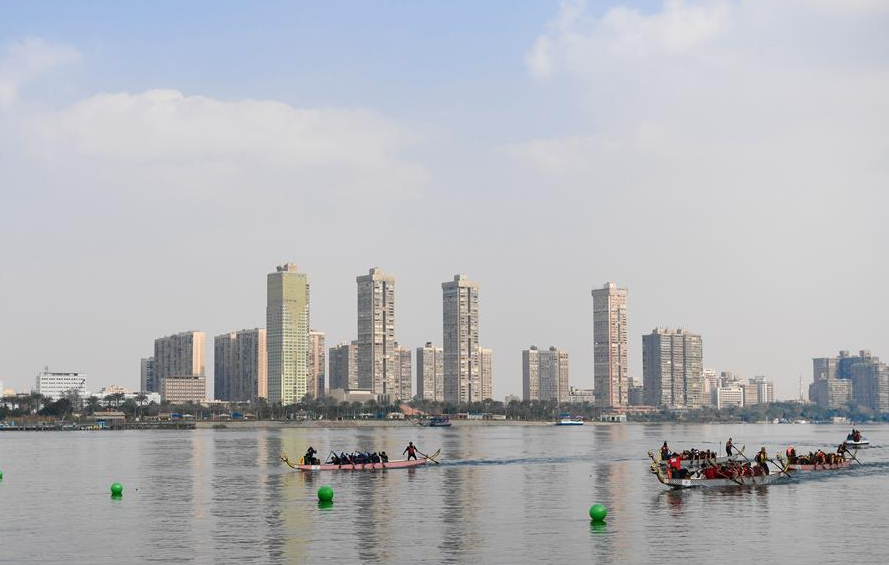 Egypt's Nile River hosted on Saturday an international dragon boat festival to celebrate Chinese New Year, with over 200 paddlers of 24 teams from several countries including China, Egypt, the United States, Australia, the Philippines and Singapore.

Overlooking the west bank of the river, Royal Mohamed Ali Club in Giza Province near the capital Cairo was the main venue of the event and the finishing point of the race.

Its green yards were decorated with Chinese-style red lanterns as well as a giant panda parade balloon, and its garden bridge with colorful rotating paper fans on both sides.

Ehab Gouda, an Egyptian organizer and head of the Egyptian Friendship Association in China's Hong Kong, said that the event was held to share the Chinese people their celebrations of Spring Festival, also known as Chinese New Year.

"The purpose of the event is both cultural and touristic, and it also seeks to promote dragon boating as a sport to be practiced and enjoyed by both Egyptians and foreign residents in Egypt," he told Xinhua.

Ahead of the main race, a dragon boat eye-dotting ceremony was held by using black ink to dot the eyes of four wooden dragon's heads to metaphorically bring life to the fifth big red dragon whose eyes turned red after the dotting is completed, which is a tradition ahead of the 2,000-year-old Chinese sport. 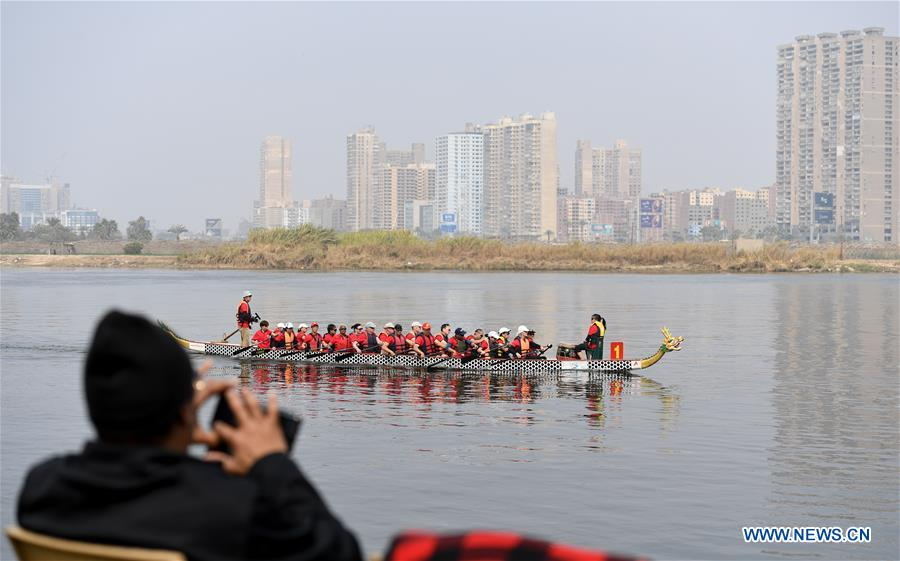 Shi Yuewen, cultural counselor of the Chinese embassy in Cairo, who took part in the dragon eye-dotting ceremony, said that the festival witnessed more teams from different countries compared with last year, in addition to renowned guests and senior diplomats.

"Besides the dragon boat competition, we've also organized activities related to the Chinese Spring Festival such as traditional Chinese games and riddles, and we've arranged a photo exhibition to show China's modern life and its great development in recent years," the Chinese diplomat told Xinhua.

As the dragon boats ran in the river and approached the finishing point near the club, with paddlers on both sides, a drummer in the front and a steersperson in the back of each boat, amid cheers of spectators who waved the flags of their countries, the Egyptian and Philippine teams were the winners of most rounds, garnering most of the gold medals and trophies. 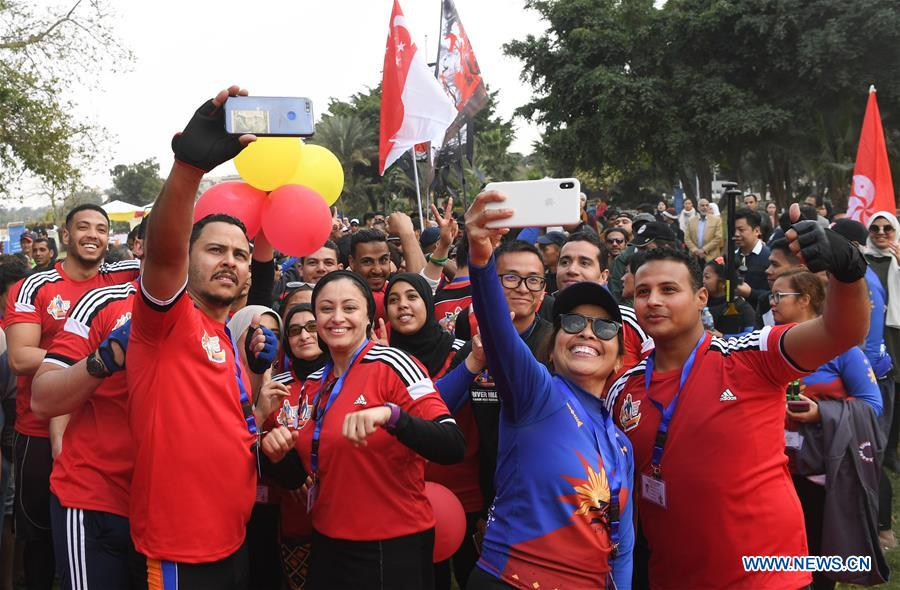 "This event doesn't only bring the Egyptian and Chinese people together, it also boosts friendship of several nations as we have here competitors from the U.S., Singapore, the Philippines, China's Macao and others," Sayyid Gomaa, the coach and paddler of Dragon Boat Egypt, told Xinhua after a winning round.

"We have more than 20 paddlers in the Philippine team. We lost the first round because we had a hard time in the inside lane as the water was too hard to move the boat, but we're sure to achieve the first place in the women's race," said Marcia Cristobal, team manager of Philippine Alliance and also former president of the Philippine Dragon Boat Federation.

"We're very excited to just be here with the different cultures and to have conversations and get to know people. Being here allows us to become more open and friendly and take in other cultures. So, it's been delightful," she added. 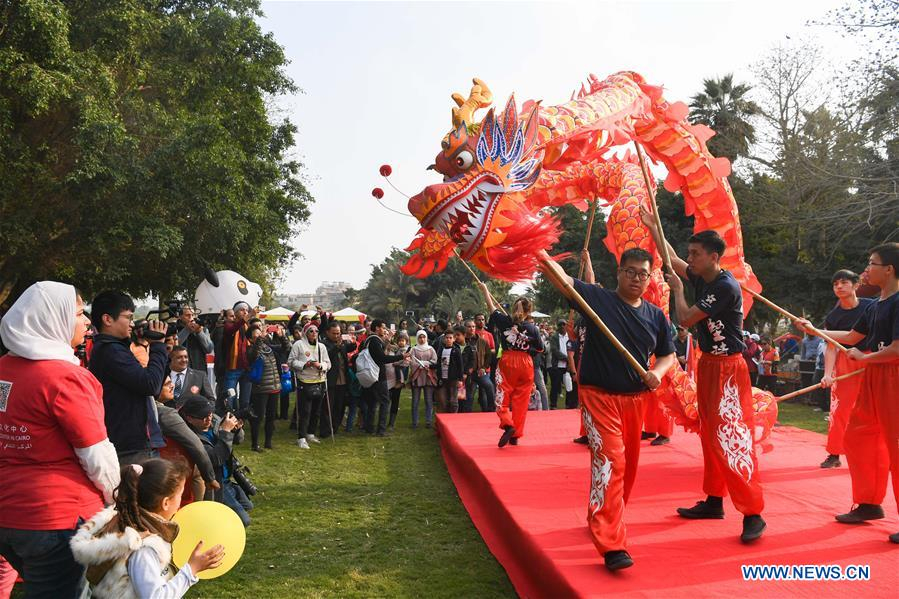 Besides the race, hundreds of visitors of the park, adults and children, enjoyed the exhibitions about China as well as fun games and puzzles for symbolic prizes like toys pandas, small drums held by the Chinese Cultural Center in Cairo.

Sherif Mansour, an engineer in his 30s, came to the event with his wife and two children for entertainment.

"The general atmosphere is nice, with different nationalities and attractive games for children. It's really a nice day," Mansour said.

Amira Ayman, a 17-year-old high school student, said that the festival this year is more popular with more visitors, noting that she liked the games held in the yard such as the riddles hanging from lanterns and the nose sticking on the face of a wooden figure while being blindfolded.

"The Egyptian-Chinese friendship is old and their diplomatic relations have been established for over 60 years, so we find the Chinese people very close to us. Some of them amazingly speak Arabic too," she told Xinhua with a big smile.