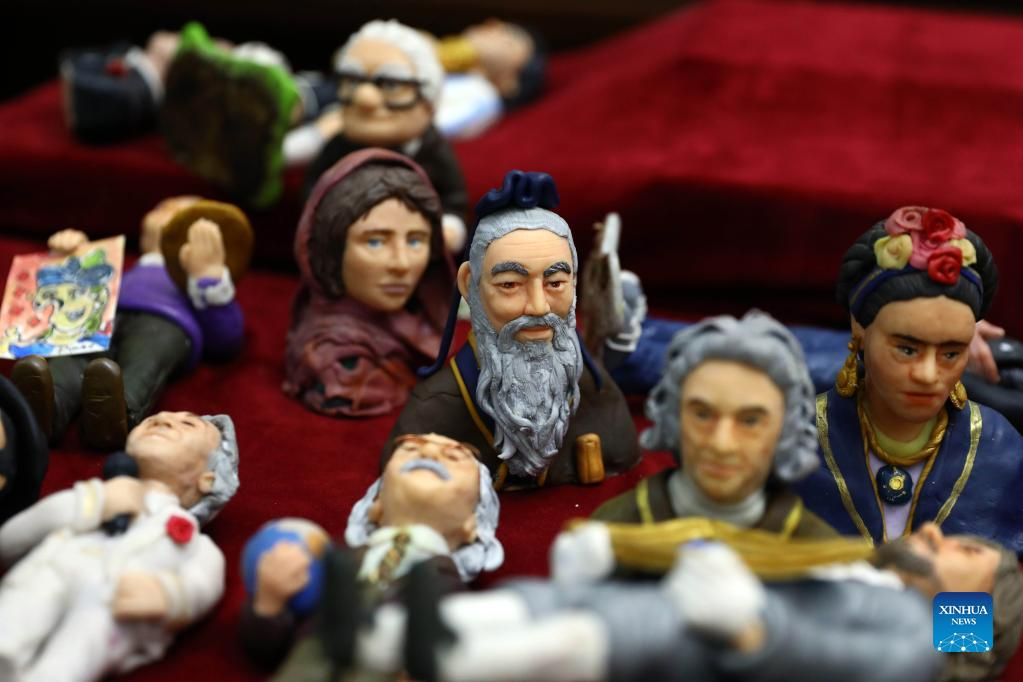 Photo taken on Jan. 2, 2022 shows miniature sculptures carved by Egyptian artist Fady Francis at his workshop in Cairo, Egypt. On a table in downtown Cairo, Fady Francis, 30, aligns miniature sculptures of 100 influential world figures, standing side by side in harmony, although the figures were from different cultures, spoke different languages and lived in different eras in history. (Photo: Xinhua/Ahmed Gomaa)

On a table in downtown Cairo, Fady Francis, 30, aligns miniature sculptures of 100 influential world figures, standing side by side in harmony, although the figures were from different cultures, spoke different languages and lived in different eras in history.

These statues and busts are carved by Francis as part of his 100-figure sculpture project that he has been working on over the past three years and expects to display in exhibitions in Egypt and abroad later this year.

"They gather together in one place regardless of their different languages and cultures," the Egyptian artist and journalist told Xinhua, stressing that it is the theme of his project.

Francis said his choice of Taha Hussein was because he was one of the most influential Egyptian writers in the 20th century and was referred to as "the Dean of Arabic Literature," although he became blind in his early childhood.

"He was a figure that defied all difficult conditions and his influence wasn't restricted to Egypt but extended to the world," he added.

Francis said the bust of Confucius was one of his lastest works, noting that he visited China in 2017 and was impressed by its culture and architecture.

"He (Confucius) is a Chinese philosopher whose thoughts influenced humanity. His works were translated into different languages across the world. I chose him as a symbol of Chinese culture, thought and philosophy," Francis told Xinhua.

Francis started learning to paint since childhood, and was inspired by the ancient Egyptian artistic antiquities in the monument-rich province of Luxor, where he was born and grew up.

Three years ago, his interest turned to sculpture. Now he uses polymer clay as the main material of his sculptures, whose heights vary between 8 and 18 cm, shaping them with simple sculpting tools such as a toothpick and a needle, and using a magnifying glass to be able to take care of the smallest details.

Some of the miniature statues are sculptured in a caricature-based style with bigger heads, while the focus of some busts is on the details of the facial features such as those of Confucius and Tagore, according to the artist.

Although the first year under the COVID-19 pandemic was difficult for the world, Francis took the global lockdown that followed as a "chance" to improve his sculpturing skills and managed to finish 60 miniature sculptures in 2020.

"I believe that art is a message of peace that unites all human beings despite their different cultures and languages," the artist told Xinhua.