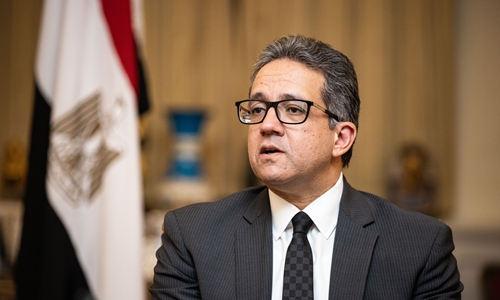 On Thursday, Minister of Antiquities of Egypt Khaled Elanani attended a media event at the Embassy of Egypt in Beijing to deliver a lecture on new archaeological discoveries and express his country's willingness to enhance cultural cooperation with China in the future.

Elanani presented new archaeological finds including the recent significant discovery of two young lion corpses unearthed alongside a group of mummified animals. Previously a tour guide, Elanani said he hopes to attract more Chinese tourists to Egypt by promoting Egyptian civilization and heritage. New museums are being constructed and renovated to improve the effectiveness of displays. Additionally, more tourist sites have also been opened, including the Tomb of Mehu in Saqqara and the Opet Temple at Karnak.

He noted that as two great civilizations, Egypt and China have many cultural similarities, not least of which are that the two bear the heavy burden of working to retrieve looted relics. Both countries have made immense efforts to repatriate lost artifacts. Since the founding of the People's Republic of China, more than 150,000 artifacts have been returned to the nation. This also marks the closeness between the two nations, as in 2017 Egypt returned smuggled paper currency and vouchers dating back to the early 20th century to China.

As to Eygpt, Elanani noted that 1,163 relics and 21,660 ancient coins have been repatriated to the country over the last three years. He expressed his hope that the two countries could work together to return lost relics to their home countries.

Elanani said he was amazed by China's heritage-preservation efforts and admires the fact that there are more than 5,000 museums in China and that the National Museum of China alone attracts about 8 million visitors every year.

"We are competing with each other," Elanani said, noting that it seems that new, big discoveries are made in China almost every week.

"We are very happy that each day we know more about our civilizations."

Calling them "Indiana Jones," Elanani stressed that the results of archaeological projects come from scholars and researchers who work meticulously at heritage sites.

Field researchers come from all over the world.

In recent years, Egypt has embarked on 340 cooperative missions with 25 countries. A Chinese team joined one such project in November 2018. Elanani said he looks forward to seeing more Chinese research centers and universities work in this field.

Luo Lin, a professor of Arabic language and culture studies, told the Global Times that Egyptian relics are well known to Chinese people and that many museums in China would love to hold exhibitions for their display. He added that he hopes more precious relics can be put on display for lovers of history in China.

Elanani noted that negotiations are underway with the National Museum of China for a temporary exhibition. During his visit to China, he has also met with the president of Peking University to work on exchange projects in academic and research fields.