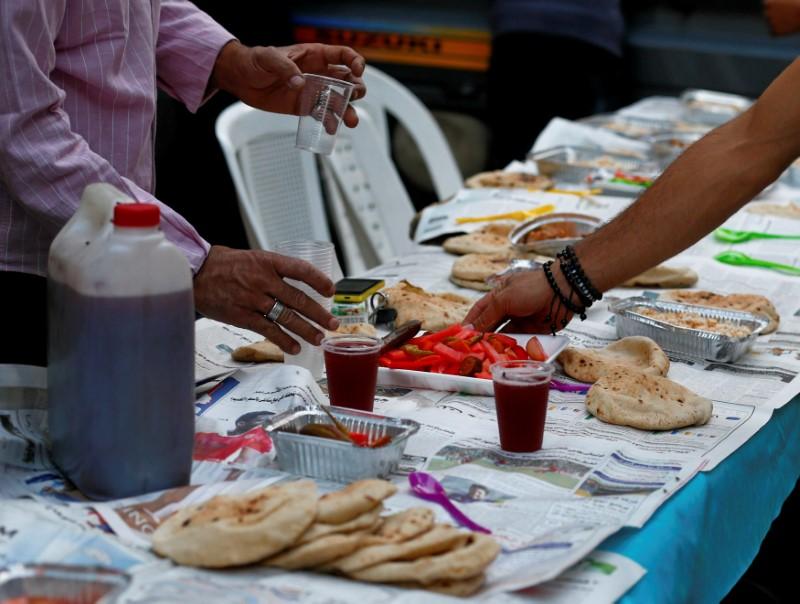 Just before the sunset on Friday, more than 1,000 residents in Cairo's Matariya district gathered to have the Iftar meal, the breaking of Muslims' fasting during Ramadan.

"We do it once every Ramadan," Abdel-Fattah Hassan, a government employee, told Xinhua, adding that they have held this gathering for the sixth year running.

For Muslims, Ramadan, a celebratory religious occasion during which they abstain from eating, drinking and sexual relations from dawn to dusk, serves to consolidate social unity and solidarity.

In Matariya district, one of Cairo's old quarters, residents choose to hold this unique Ramadan dinner to embody such solidarity.

In a long narrow alley in Ezbet al-Sayda area of Matariya, hundreds of residents sat around a long queue of tables, where dozens of young people were hastening to serve food before the sunset azan, the Muslim's call for prayers to break their fast.

"This Iftar brings us closer to each other as neighbors," Hassan said as he prepared iced juice.

People feel the true meaning of the fasting month on this day as everyone plays a role in preparing the meals, drinks and the tables, he explained.

"This also removes the barriers of social classes to show that we are all equal, as you can see doctors, engineers and high ranking employees working and cleaning here," Hassan added.

He revealed that residents started to collect money for this banquet six months before Ramadan, adding that men would also help women "cook food, clean dishes and prepare soft drinks."

Hassan proudly said they are determined to keep this habit going by passing the tradition to the next generations.

Throughout the fasting month, wealthy people in Egypt hold free Mawa'id Al-Rahman, or the banquet of compassion, for the poor and those unable to reach their homes before Iftar.

The Mawa'id Al-Rahman, a cultural and religious phenomenon deeply rooted in the Egyptian society, can be seen almost in every neighborhood across the country during Ramadan.

On the corner of the narrow alleyway where the dinner is held, 36-year-old grocer Adel Mohammed was busy pouring cold tamarind juice in small plastic cups.

"I have been preparing the juice since the afternoon," Mohammed said. "I closed my shop today to help my neighbors."

"We invite many poor people to eat with us. There are many neighbors who cannot afford to pay, but they also share this special moment with us," he added.

Not far away from Mohammed, 30-year-old Alaa Abu Senna was sitting at the table, ready to feast on the rich meal.

"I'm invited by a friend who lives in the neighborhood. This is the first time I enjoy such an atmosphere," the taxi driver told Xinhua.