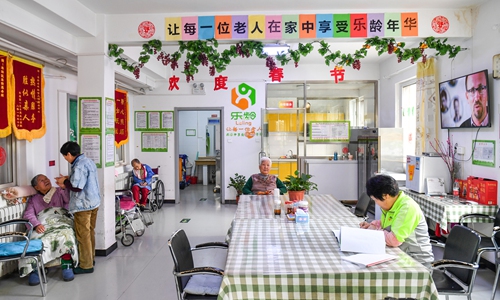 A view of a residential nursing home in Beijing. (Photo: VCG)

"Banding together" is another pattern of elderly care, in which a group of elderly people who are familiar with each other live together, accompany and help each other.

Mashan district of Jixi in Northeast China's Heilongjiang Province has a population of 31,000 with 20 percent of them being elderly people, and more than half of them are empty-nested, and have chronic diseases. It was a problem for them to cook, heat their homes, and do chores on their own.

A solar energy heater and other facilities can now be seen in Taihe village, serving the elderly support station. Wang Qingyu, a senior in the community, sat on the heated brick bed and said: "I will not get lost outside if I want to take a walk outside, and if I want to chitchat, I have old friends around me."

"We have people cooking us three meals and making heat [in the elderly support station,] and life here is playing cards, taking a walk and enjoying sunshine every day, which is nice," said Wang.

Wang said this is exactly the retirement life she is longing for, and life in the elderly support station exempts her children's burden and worrying.

Meng Xianrong, 68, is a retired director of women's federation of Taihe village. After the establishment of the station, she and other 11 members of the Communist Party of China (CPC) in the village registered as volunteers and do some cooking and cleaning in their spare time.

Meng thinks working and sweating in the station makes her feel the meaning of her life.

There are 13 elderly support stations in Mashan district. In the township, the stations mainly provide entertainment venues for old people since they require more spiritual care, but in villages, the focus is on accommodating residential and nutritional needs, according to the report.

"We gather old people here, on one hand, to take care of them, on the other hand, to find them something to do," said Ma Chunli, an official of Heping village.

In the elderly support stations in the township, the premises were built by the government and are maintained by elderly people themselves. Not only do the elderly people band together, the funds for the project are equally distributed.