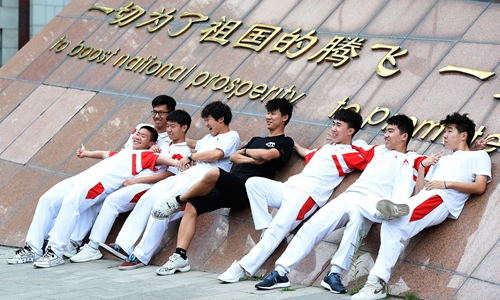 Students pose for a photo on June 8 in the high school affiliated to Renmin University after college entrance examinations. (Photo: VCG)

All kinds of elite education agencies for children have been set up in some big cities in China.

In these agencies, children start to learn EMBA courses at the age of five, play golf by age of three, and do yoga at 18-month-olds.

As China becomes more globally influential, molding leaders out of the country's students is in the interests of both China and the world, according to China Education Daily.

More Chinese parents are considering elite education, an education pattern aiming at cultivate an elite group within society. But some harbor persisting fears that their children will lag behind others.

Many parents are pushing their children to learn fencing, equestrian and various musical instruments to get accepted by elite schools.

Elite educational institutions for children have proliferated in many big cities in China. In order to cultivate "little gentlemen," "little ladies," and "little CEOs," parents do not hesitate spending a fortune, according to Economic Information Daily.

A parent was quoted by the Economic Information Daily was saying "As long as the financial situation allows, it's better to help my child learn international way of socializing as early as possible. We are willing to invest in our child."

This practice enables children to get better grades, find good jobs and, value the concept of "taking the world as our responsibility" in the heart of children. It teaches the virtues of sacrificing and altruism.

Zhang Jinghua, a 28-year-old mother to be, discussed her coming child's education with her husband throughout her pregnancy.

"After I became pregnant, I have been thinking about encouraging my kid to learn math, programming and piano. Especially if it is a girl, she needs to focus on math and programming," said Zhang

Zhang told the Global Times that she wishes her child will intellectually grow. She wants to cultivate her child to be a logical person who is not ashamed of self-expression.

Zhang and her husband hope their child will not suffer what they have suffered and become a complete, conscious member of society.

"We've never thought about asking our child to really be elite, and we're not interested in the buzzwords for elite education such as golf, equestrian, and international school," Zhang said, adding that "whether to become an elite or not may be the choice of my child himself, which also depends on his real ability."

She assumes the growing trend of expensive elite education is mainly because those parents pursuing it are more affluent and can choose to give whatever they want to their children.