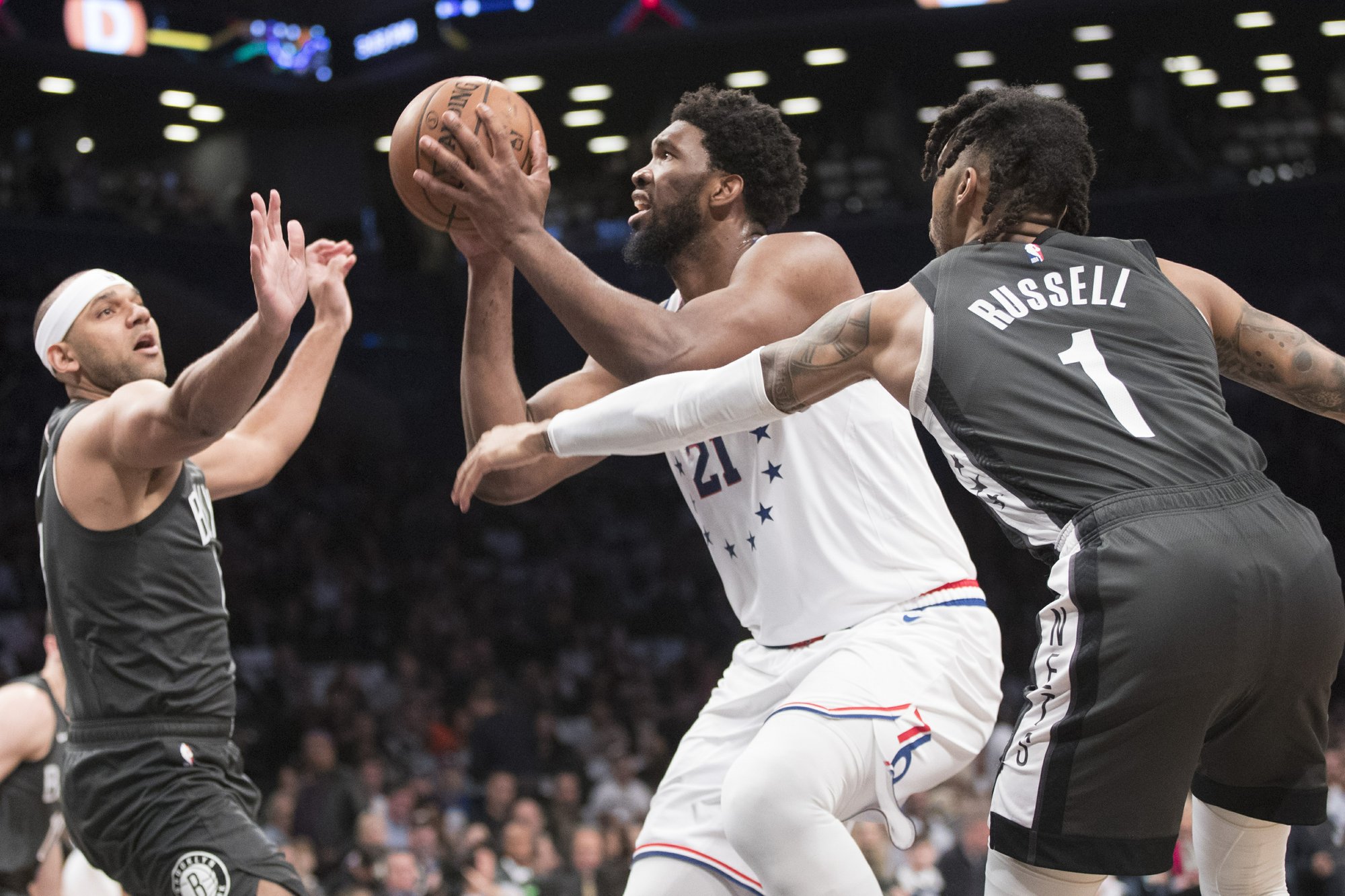 Philadelphia 76ers center Joel Embiid (21) goes to the basket against Brooklyn Nets guard D'Angelo Russell (1)and forward Jared Dudley during the first half of of Game 4 of a first-round NBA basketball playoff series, Saturday, April 20, 2019, in New York. (Photo: AP)

Joel Embiid had 31 points and 16 rebounds, and passed to Mike Scott for the go-ahead 3-pointer with 18 seconds left as the Philadelphia 76ers beat the Brooklyn Nets 112-108 on Saturday to take a 3-1 series lead.

Embiid also had a flagrant foul that led to a scuffle and two ejections during an eventful return to the lineup after missing Game 3 with a sore left knee.

Tobias Harris had 24 points, eight rebounds and six assists for the 76ers. They can advance to the Eastern Conference semifinals for the second straight season with a victory at home Tuesday night.

They got a big boost from the return of Embiid, who scored eight straight points in the fourth quarter after the Nets led by seven. He helped the 76ers overcome the loss of Jimmy Butler, who was ejected in the third quarter after Embiid’s hard foul on Jarrett Allen.

Caris LeVert scored 25 points after being inserted into the Nets’ starting lineup. D’Angelo Russell and Allen each added 21.

Jared Dudley also was inserted into the starting lineup for the Nets and had been agitating the 76ers with his defense and his talking, but was gone midway through the third quarter as one of the central figures in the scuffle that spilled into the stands.

Embiid swung his arm forcefully while fouling Allen, and Dudley quickly moved in and bumped Embiid. Butler then ran in and pushed Dudley to start the shoving. Dudley, Simmons and referee Ed Malloy all got knocked into the seats, and after a lengthy video review, Butler and Dudley were given technical fouls and ejected, and Embiid’s foul was ruled a flagrant 1.

Embiid would later make the biggest mark with his offense. The 76ers were trying to get the ball to him trailing by one after Joe Harris’ layup, but Embiid couldn’t control the pass under the rim. But he regained the ball and found Scott in the corner for a 3 and a 110-108 lead.

Allen then turned the ball over after three Sixers surrounded him and Harris closed out the scoring with two free throws.

Dudley and Simmons jawed at each other after Dudley gave him a long stare with his arms up after hitting a 3-pointer during a 9-0 run that gave Brooklyn a 63-53 lead shortly before halftime. The Nets led 63-57 at the break.

76ers: The 76ers are 5-0 on the road against the Nets in the playoffs. ... Greg Monroe, who started Game 3 and had nine points and 13 rebounds in place of Embiid, played just one minute.

Nets: Spencer Dinwiddie scored 18 points. ... Joe Harris went 0 for 6 from behind the arc and the NBA’s leading 3-point shooter hasn’t made one in the two games in Brooklyn. ... Backup F/C Ed Davis missed the game with a sprained right ankle.