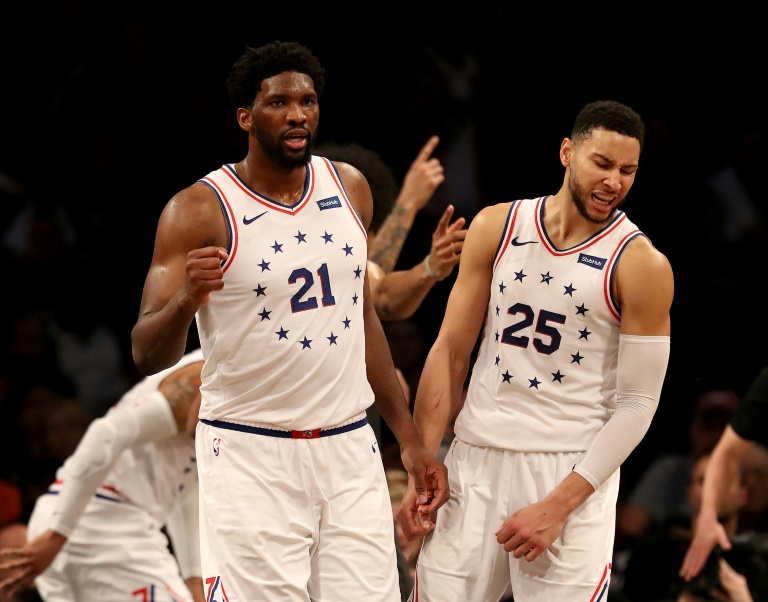 Philadelphia's Joel Embiid returned from injury to score a game-high 31 points and grab 16 rebounds, powering the 76ers to a 112-108 NBA playoff victory at Brooklyn on Saturday.

Despite a third-quarter incident that saw two players ejected, the 76ers seized a 3-1 lead in the first-round series against the Nets and could advance in the Eastern Conference best-of-seven matchup with a home victory Tuesday.

In the other Eastern Conference game, Khris Middleton finished with 20 points and nine rebounds as the top-seeded Milwaukee Bucks put the Detroit Pistons on the brink of elimination with a 119-103 win. The victory give the Bucks a 3-0 lead and they can wrap up the series with a win on the road in the Motor City on Monday.

Philadelphia, down by 10 points early in the third quarter, battled back most of the second half before taking the lead on a run of eight points by Embiid, who missed game three with a sore left knee.

A slam dunk and layup by Embiid gave the 76ers their first late lead at 102-101 but, after an exchange of layups and three-pointers as well as turnovers, fell behind 108-107 on a basket by Brooklyn's Joe Harris with 25 seconds remaining.

On the next 76er possession, Embiid flipped the last of his seven assists to Mike Scott, whose corner three-pointer put Philadelphia ahead to stay 110-108 with 19 seconds remaining.

Australian Ben Simmons -- who added 15 points, eight rebounds and eight assists for the 76ers -- stole the ball from Brooklyn's Jarett Allen and Tobias Harris sank two free throws for the last of his 24 points to clinch the triumph.

Caris LeVert led the Nets with 25 points while Brooklyn had 21 points each from Allen and D'Angelo Russell.

Embiid, who had elbowed Allen in the face in game two, was whistled for a hard foul on Allen that prompted Dudley to rush at Embiid, taking down the Sixers big man.

Butler swung his left arm at Dudley, who wound up in the front row seats with Simmons at one stage, to earn his ejection.

"I know these guys are going to go at me because they want me to retaliate, so I've got to be mature when I'm on the court and just stay cool and not react," Embiid said.

"Today I could have reacted but I felt like my team needed me more than they needed Jared Dudley, so I've just got to stay cool and mature and do my job."

In Detroit, Brook Lopez tallied 19 points and had seven rebounds and five blocked shots and Eric Bledsoe scored 19 points for the Bucks.

Giannis Antetokounmpo delivered 14 points and 10 rebounds for his third straight double-double in the series and Nikola Mirotic chipped in 12 points.

Detroit's hobbled star Blake Griffin had 27 points in 31 minutes after he missed the first two games of the series with a sore knee.

Griffin was cleared with his leg heavily wrapped but it didn't change the outcome.

The Pistons have now lost 13 straight playoff games dating back to 2008.

In the Western Conference, the Denver Nuggets -- led by game highs of 29 points, 12 rebounds and eight assists from Serbian playmaker Nikola Jokic -- pulled level with San Antonio at 2-2 in their opening series with a 117-103 road triumph over the Spurs.

Denver posted the second-best regular-season record in the West this season but it was Spurs that could have pushed the Nuggets to the brink of elimination with a victory.

Instead, the Nuggets hit 15-of-31 points from three-point range and snapped a 14-game losing streak in San Antonio dating to March 2012, with Jokic and Jamal Murray's 24 points leading the way.

"We haven't won here in a while. That was on our minds," Murray said. "Now we go back home 2-2. We'll bring the same defensive energy and get the job done."

The series continues with game five Tuesday in Denver.