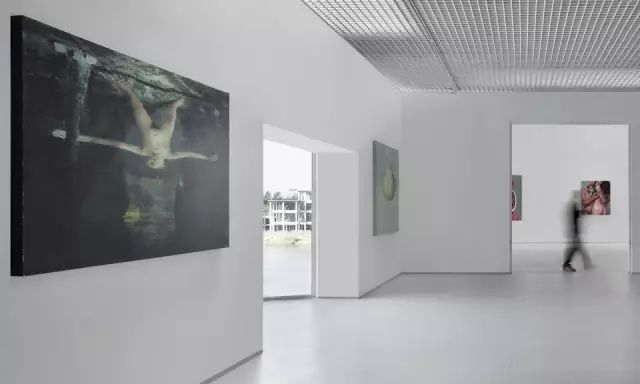 Hadina, from Egypt, was surprised to find her painting included in the "Art Travel" program by Yinchuan Han Meilin Art Museum and displayed at the museum in northwest China.

"It's really exciting that visitors from all over the world can see my painting," said Hadina, 32.

Yinchuan Han Meilin Art Museum, located in the Helan Mountains Rock Art Heritage Park in Ningxia Hui Autonomous Region, is currently exhibiting the fine arts of Chinese artist Han Meilin. Beginning this summer, the museum has a new installation: a 4 meter-high, 7 meter-long "picture wall" made of 560 paintings by 560 ordinary people from around the world, including Hadina's.

"This 'picture wall' is a result of our 'Art Travel' program," said Zhang Xu, responsible for the program. "It was designed for ordinary people who have an artistic dream."

The program began last September. Authorities divided a big picture of the panoramic view of the museum and the Helan Mountains behind it into 560 pieces, and mailed the pieces, a picture of the panoramic view, and a small blank canvas to each participant. The participants were required to paint the canvas within a month. They needed to make sure that the museum's outline was visible after painting the canvases, so that when the pieces were put together, the image of the museum and the mountains was still visible.

"The participants had various occupations, ages, and even nationalities," Zhang said. "As long as they left their addresses, our canvases would reach them and have their stories recorded in their paintings," Zhang said, adding that the canvases had traveled to almost every corner of the country, and even some foreigners in China, such as Hadina, had signed up.

"The moment I opened the parcel and saw the picture of the museum, I was quite curious what it would be like if my painting were part of it," said Hadina. "Blue sky, green leaves and red dates are typical in my country, so I drew my homesickness into a date palm."

Months ago, she paid a visit to the museum, and was more than happy to find her painting included in the final "picture wall."

"It's amazing to see hundreds of different paintings combined so perfectly in one picture, and I'm proud that one of them belongs to me," she said.

Xie Huihua, 23, from south China's Guangdong Province, felt rather thrilled to find that not only her painting but also her pupils' paintings were included in the "picture wall."

Last year, Xie volunteered to teach art in a remote Tibetan primary school. She said it was hard for local children to get in touch with the outside world, so when told that their paintings would be displayed in a museum thousands of miles away, some jumped at the chance.

"Children may lack painting skills, but they are rich in imagination," Xie said. "Their images, like houses and flowers, were mostly drawn with simple lines, but these things indicate their childhood, carefree attitude, and passion for color."

Xie also drew a picture, in which her students were running and playing under a tree by a river. A distant snow mountain was reflected in the clear water.

"Sometimes I feel that life is all about wonderful encounters, like my experience with those Tibetan kids, as well as theirs with the 'Art Travel' program," said Xie.

Most participants wrote down their stories on the paintings to make themselves understood.

Yang Huichao, a guide in the museum, said she was deeply touched when memorizing the art stories.

"Art is usually regarded as untouchable for ordinary people, but their paintings made art more real," Yang said. "Some people painted to pray for ill family members, to realize a childhood dream, or to show their inner world."

The final "picture wall" has been on display for half a year, attracting many visitors who not only took photos but also explored the stories behind. Some 100 participants came to see the exhibition themselves.

"Some kids were so excited that they jumped to point out their own paintings and kept saying 'Look! This is mine!'" Yang said. "Introducing 560 paintings to the public may have increased my workload, but I quite enjoy it."

According to Yang, the museum plans to upload all the paintings and their related stories on a digital screen, allowing visitors to touch the screen to read the stories.

"Currently, we are printing 1,000 albums, and each participant will get one as a way to cherish their contribution," Yang said.