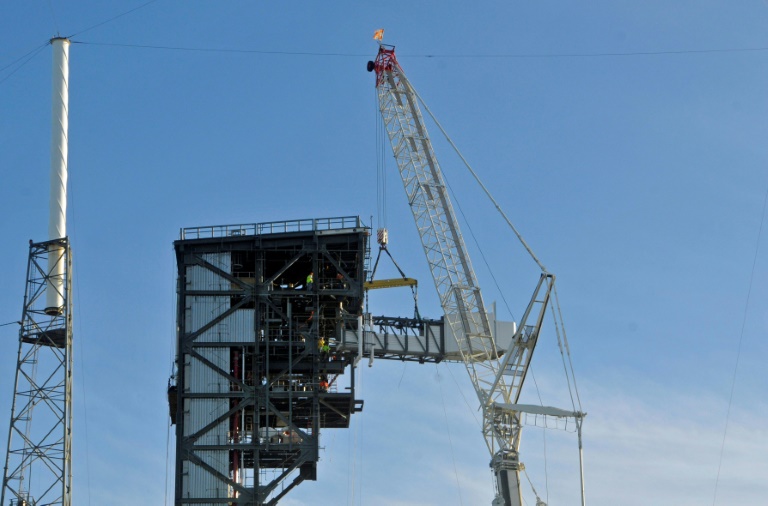 A support structure for Boeing's Starliner spacecraft, the first flight of which has been postponed to 2019, is seen being installed in Cape Canaveral, Florida in 2016. (Photo: AFP)

An engine flaw discovered during a launchpad test of Boeing's Starliner spaceship, designed to carry humans to the International Space Station, has delayed its first crew test flight until next year.

The problem involved failures with several abort engines that did not close as planned and allowed propellant to leak, company officials said in a conference call on Wednesday.

"We are confident we identified the root cause and are implementing corrective actions now," said vice president and program manager of Boeing's commercial crew program John Mulholland, indicating that "minor design changes" are under way.

The setback means the first crewed test flight will be pushed back to the middle of 2019, he said.

Initially, the first test flights with people on board were scheduled to take place late in 2018.

Both Boeing and SpaceX are building spaceships to transport astronauts and restore US access to the space station, a capacity lost when the shuttle program was retired in 2011, as planned after 30 years of operation.

It is unclear when these first flights will happen.

A report issued last month by a US government auditor said Boeing and SpaceX are unlikely to be able to send astronauts to the ISS next year, resulting in a possible gap in the US presence on the spacecraft.

The United States has bought seats for NASA astronauts on board Russia's Soyuz spacecraft -- at a price of more than $80 million each -- through November 2019.

Neither SpaceX nor Boeing is expected to be ready to carry out flights with people on board by that date because of various delays in certifying their programs, the independent Government Accountability Office said in its July report.

SpaceX and Boeing have not released updated timelines for the first flights of their respective Crew Dragon and Starliner capsules.