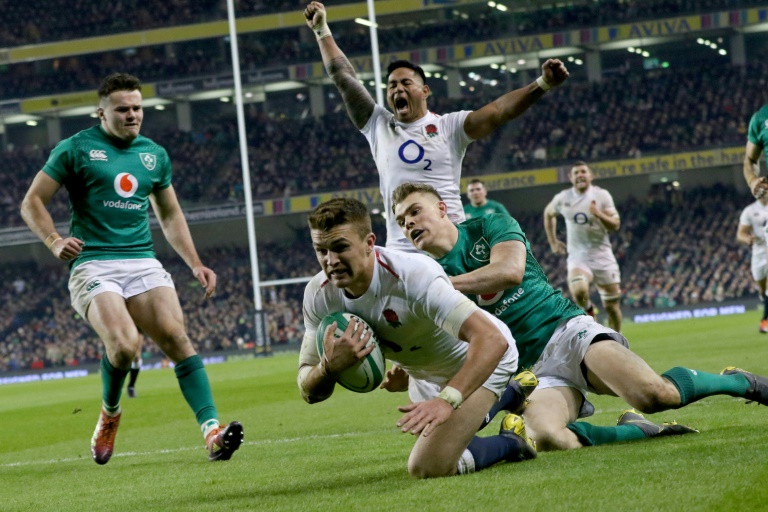 Ireland suffered a reality check in their defeat by England on Saturday which ended their hopes of back to back Six Nations Grand Slams said head coach Joe Schmidt. (Photo: AFP)

The fact that this was his first home defeat in the Six Nations since taking over after the tournament in 2013 made it an equally bitter pill to swallow for the 53-year-old New Zealander.

However, Schmidt made no excuses for the manner of the defeat -- which brought to an end their record home winning run of 12 -- saying they had been out bullied.

"Yeah, that is a reality check, that's how it's going to be," said Schmidt.

"That's why England are such a, literally, a big team.

"They (England) did really well tonight. It's hard to take anything away from England.

"The intensity they brought to the game, it was more a simmering physical intensity that they collectively delivered that made it a suffocating place to be out on the pitch."

Schmidt, who has a few injury worries with Devin Toner turning an ankle, CJ Stander suffering a facial injury and Keith Earls unable to play the second-half after two hefty high tackles, said the way in which his side got out-muscled reminded him of the defeat by the All Blacks in 2016.

"I think the same thing happened in 2016 (in Dublin) against the All Blacks," sad Schmidt.

"We got bullied here and you have got to be prepared to give as good as you get and I do not think we did tonight.

"It turned into that type of muddy battle which is very difficult to contest if the ball coming back is slow.

"It is very hard to get on the front foot."

Ireland captain Rory Best said it was not necessarily a wake up call but time would tell how serious a reverse it was.

"When we put a run of wins in a row we never thought we were the finished article," said Best.

"This is now about how we respond whether it is a bump in the road or something more than that.

"The group are hurting in there, that result ultimately we can not change it but we can improve on it."

'Take this on the chin'

Schmidt rued the absence in the second-half of Earls his most experienced player in the back three with fellow wing Jacob Stockdale still quite inexperienced and Robbie Henshaw playing at fullback for only the second time in his Test career.

He said his side must shake off their habit of being slow starters, on Saturday they conceded a second minute try to Elliot Daly.

"I am frustrated that we do tend to start slow," said Schmidt.

"Looking ahead to the World Cup we have to hit the ground running.

"Against Argentina last November we were slow against France in the first match if last year's Six Nations we were slow to click into gear but picked up momentum during the tournament.

"We have got to be able to start better."

Best, who could end up playing in his fourth World Cup later this year, said he and his team-mates needed to regather themselves for the challenge of Scotland in Edinburgh.

"We have talked about the character of this squad we have to take this on the chin we were bettered by England in all facets of the game," said the 36-year-old.

"We will get some harsh feedback from the coaches.

"It is going to be a tough Test at Murrayfield.

"We will spend a little bit of time reflecting on a disappointing and uncharacteristic performance from us."