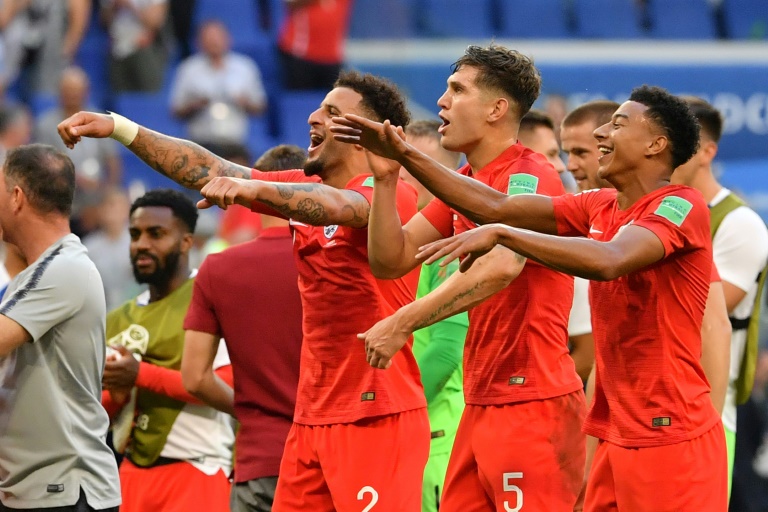 England were Sunday looking forward to their first World Cup semi-final since 1990 as host nation Russia came to terms with the end of their extraordinary run following defeat on penalties to Croatia.

They will face Croatia, who had to endure a strength-sapping penalty shootout for the second consecutive match, in front of 80,000 people in Moscow's Luzhniki Stadium on Wednesday.

"Cancel your plans for Wednesday night - England have reached their first World Cup semi-final in nearly 30 years," said the Sun on Sunday.

"The dream goes on! England in ecstasy," trumpeted the Mail On Sunday.

Leicester defender Harry Maguire headed England ahead in the first half in Samara and Tottenham's Dele Alli added a second just before the hour as Southgate's team enjoyed the lion's share of possession.

Man-of-the-match Jordan Pickford made three outstanding saves to keep Sweden at bay, further burnishing a reputation that has grown throughout the tournament.

Captain Harry Kane, who leads the goalscoring charts in Russia with six strikes, failed to find the net for the first time but said confidence was high after England posted their best run at a major tournament since Euro '96.

"We're buzzing. We know there is still a big game ahead, but we're feeling really good," he said.

England have won the World Cup just once, when they hosted it in 1966, but the public and pundits are starting to dream.

"England's players have guaranteed they will return from the World Cup as heroes. Now they can dream of a grander ambition. Can they come home as legends?" asked former England defender Jamie Carragher in a column for the Sunday Telegraph.

Russia's fairytale run came to a halt as they were beaten on penalties by Croatia after 120 gruelling minutes of football.

The Russians came into their own tournament as the lowest-ranked nation but, just as they did in eliminating Spain in the previous round, refused to die despite enjoying just 36 percent of possession against a superior Croatian team.

Croatia, led superbly by Luka Modric, thought they had won the match when Domagoj Vida rose to nod in a corner in the first period of extra time but Mario Fernandes headed home from a free-kick to pull Russia level at 2-2.

But Russia failed to convert two of their spot-kicks, leaving Ivan Rakitic with match point and the Barcelona man kept his head to seal a 4-3 win.

Russia coach Stanislav Cherchesov lamented that fortune had not smiled on his side.

"Luck was against us," Cherchesov said. "My guys feel like conscript soldiers whose term of service was over just when they were preparing to go into battle.

"They still want to fight that war."

Russia Prime Minister Dmitry Medvedev called the team's performance "magnificent", saying the tournament would change the face of football in the host nation.

Croatia, who last reached the semis in 1998, now face the challenge of trying to recover in time to play England in Moscow.

But Modric said they would be ready to face Southgate's men.

"We have enough time to rest and prepare well," said the Real Madrid midfielder.

Vida, who used to play for Ukrainian club Dynamo Kiev, shouted "Glory to Ukraine!" in a video posted by former Croatia international Ognjen Vukojevic shortly after the match.

FIFA said it was investigating.

In the other semi-final, in Saint Petersburg on Tuesday, Belgium, who conquered Neymar's Brazil in the quarter-finals, take on France, who saw off Uruguay.

Away from Russia, the Spanish football federation said Fernando Hierro, who stood in as Spain coach when Julen Lopetegui was sacked on the eve of the World Cup, would not continue in the role.

Under the former Real Madrid and Spain defender, who had little previous coaching experience, 2010 winners Spain lost on penalties to host nation Russia in the last 16.