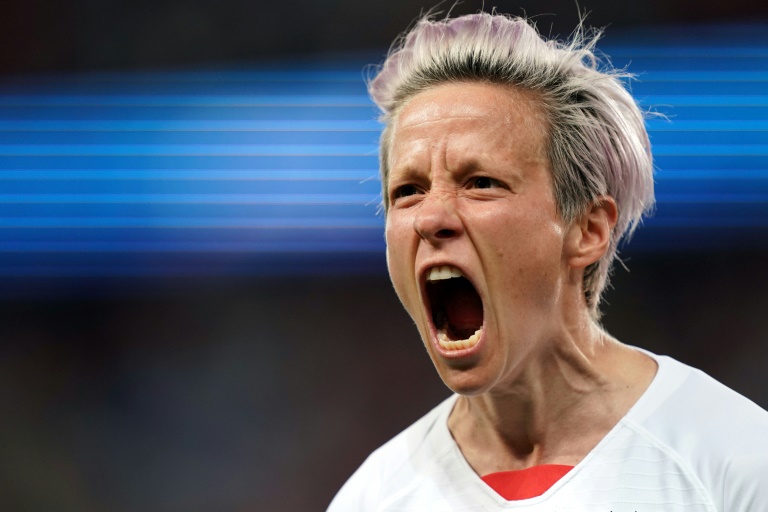 Megan Rapinoe has been one of the stories of a women's World Cup that has broken new ground in TV audiences. (Photo: AFP)

England are aiming to make history as they prepare to take on the USA with a first ever women's World Cup final squarely in their sights, as a landmark tournament moves towards a nail-biting climax.

The World Cup in France has generated record TV audiences for the women's game and Phil Neville's side come into Tuesday's clash against the reigning champions in Lyon with more people than ever expected to tune in to see the Lionesses push to go one better than in the previous two editions, when they lost out in the semis.

"You get to these moments in life and you think grasp it with both hands, both feet and all your body and that's what we've been saying to the players: don't get to a semi-final and have any regrets," Neville told reporters on Sunday.

England face an American side brimming with talent and on a high from two hard-fought 2-1 wins over Spain in the last 16 and against hosts France in the quarter-finals, both gained thanks to the attacking exploits of Megan Rapinoe.

The 33-year-old is one of the stories of this tournament, with her match-winning displays paired with intense media scrutiny after a spat with President Donald Trump over her stated refusal to visit the White House while he remains in charge.

Rapinoe hit two penalties to squeeze her side past the Spanish in an underwhelming team display and then won a thrilling clash at the Parc des Princes with another brace to win what was probably the match of the tournament so far.

"Megan is someone I've from day one that I really admire. I remember in my first She Believes (Cup) when a ball bounced on the touchline and I went to catch the ball and her studs came right through my Apple watch," Neville said.

"What I liked was that she didn't even say sorry, she just got on with it, she's a winner.

"I like the individuality both on and off the field and I think she's a world-class footballer."

Foe the USA, the match is another on their march towards an expected fourth world crown -- Neville calls them the "best team in the world without a shadow of a doubt".

The United States is the citadel of women's football, with their team bringing in more revenue than their men's side in the last three years, and coach Jill Ellis has benefited from the seriousness with which it is taken.

Ellis was born in the English city of Portsmouth but moved across the Atlantic with her family in her teens. In the US she found room to express her passion for football.

"I had zero opportunity to play football over here (in Europe) so that's really what America gave me, an environment to put on my first ever team uniform," Ellis said.

"I think my whole British culture growing up is still with me for sure and I'm grateful for that because I don't think that had I grown up in another country that the passion for football would be where it is."

Ellis has expressed happiness that the game is being taken seriously in Europe, but Alex Morgan, her team captain and the joint leading scorer in France with five goals, thinks the barriers can be pushed further back.

"To continue to fight for yourself and fight for the next generation is important," Morgan said.

"I find that a lot of times when I stand up for this team or with equality within the sport you're not necessarily going to reap all the benefits but your hope is that the next generation will."

The Netherlands face Sweden in the other semi-final in Lyon on Wednesday. The final takes place in the same stadium on Sunday.