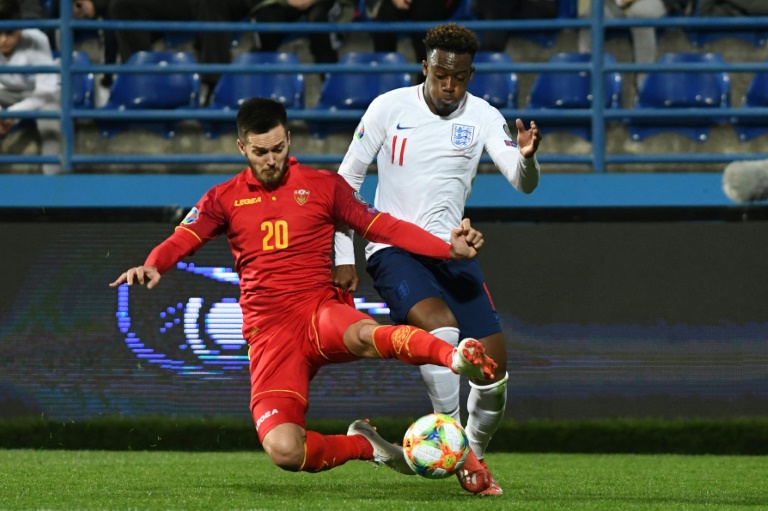 England's 5-1 victory over Montenegro will likely be remembered for the racist abuse aimed at their players but it was another indicator of why Gareth Southgate's side should be considered among the favourites for Euro 2020.

Just two games into their qualifying campaign, England's place at next year's championship already looks assured. They top Group A with six points after two wins, including their opening 5-0 thumping of the Czech Republic.

Last year's World Cup semi-finalists have scored five or more goals in consecutive matches for the first time since 1984.

England, ranked fifth in the world, have not won a major tournament since the 1966 World Cup on home soil and next year will have a similar advantage, with at least two of their group games at Wembley, plus the semi-finals and final.

Southgate, though, is shaping a squad built for much further into the future as he looks to banish England's record of under-achievement.

At 18, Callum Hudson-Odoi was handed his full England debut in Podgorica, becoming the second-youngest player to start a competitive match for England after Wayne Rooney.

West Ham's Declan Rice, 20, also started for the first time in midfield, while Jadon Sancho, who impressed against the Czechs, watched on from the bench on his 19th birthday.

Marcus Rashford (21), Joe Gomez (21) and Trent Alexander-Arnold (20) were among those not even involved for the past two games due to injury, but who have already made their mark on the international stage under Southgate.

Hudson-Odoi has yet to make a Premier League start for Chelsea but a consistent feature of Southgate's reign, helped by his knowledge of the players as former manager of the England under-21s, has been his faith in youth.

"I can't wait for clubs to pick players 50, 100 times. That is not the landscape we are operating in," said Southgate.

"What we have seen in different positions is players we think are good enough so we'll play them."

Others tipped for bright futures at international level include Manchester City midfielder Phil Foden, who was in the squad that won the 2017 under-17 World Cup alongside Sancho.

Southgate's approach was rewarded with a first World Cup semi-final in 28 years in Russia and England backed up that impressive performance by qualifying for the last four of the Nations League, with the finals to be held in Portugal in June.

Even one of the youngest squads at the World Cup has evolved over the past eight months.

Of the 11 who started the semi-final defeat by Croatia, only six did so in Montenegro on Monday.

Two of those who remain, Harry Kane, 25, and Raheem Sterling, 24, seem like veterans given the striking youth of the players around them.

Captain Kane scored against both the Czech Republic and Montenegro to take his international tally to 22 goals in just 37 matches but says he does not expect to reach his peak for another few years.

Sterling is a role model for players such as Sancho and Hudson-Odoi.

A teenage prodigy himself, he had to cope with plenty of criticism for failing to perform at international level, particularly after an embarrassing Euro 2016 exit to Iceland.

But the Manchester City forward has matured as a player and a leader on the pitch and is in devastating form for club and country.

After scoring a hat-trick against the Czechs, he scored his sixth goal in four England games against Montenegro in a match marred by racist abuse from the home fans in Podgorica.

Southgate will be wary of thinking too far ahead, mindful of past failures to convert promise into the hard currency of results.

But he knows he has an abundance of talent at his disposal, twinned with the zest of youth as he plots a new era for England.