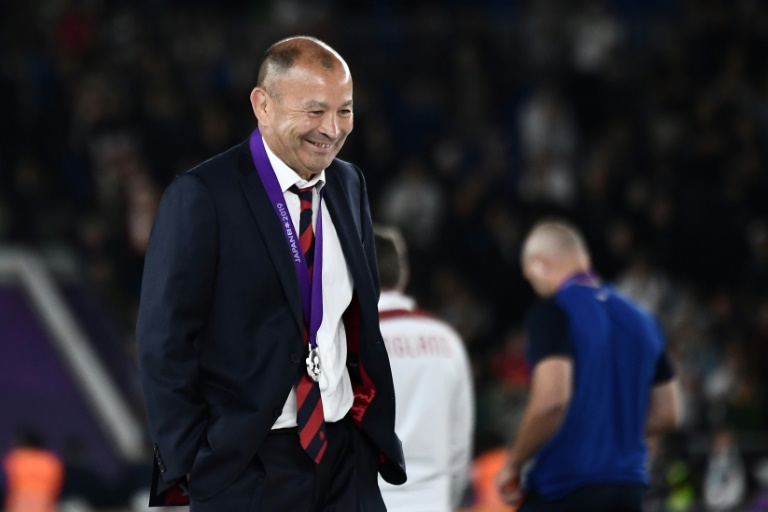 England coach Eddie Jones almost achieved his four-year plan of turning them into world champions only for South Africa to overwhelm the Red Rose brigade 32-12 in the final in Yokohama. (Photo: AFP)

England is set to begin talks with coach Eddie Jones about the prospect of the Australian leading them at the 2023 World Cup in France when the beaten finalists return home from Japan.

Jones, appointed after England's woeful first-round exit on home soil at the 2015 edition, almost achieved his four-year plan of turning them into world champions only for South Africa to overwhelm the Red Rose brigade 32-12 in Saturday's final in Yokohama.

But the way a largely youthful side -- with 25 members of a squad of 32 in their twenties -- beat Australia and defending champions New Zealand in knockout play won plaudits.

Jones's current contract runs until 2021 and Bill Sweeney, the chief executive of England's Rugby Football Union, has no doubt the 59-year-old coach will see out that deal.

"Eddie's one of the world's best coaches -- if not the best -- despite the result against South Africa," Sweeney said.

"One of the first priorities, when we get back, will be to sit down and have a chat.

"We will do it as a matter of urgency.

"Eddie is committed to his contract through to the end of August 2021 and he is fulfilling that."

But Sweeney accepts the logic that if the RFU and Jones are both happy for him to go halfway through a World Cup cycle, he should see it through to the next edition.

"It makes sense doesn't it?" he said. "If you're going to go through to France 2023 it's nice to have that unbroken stretch, but both parties have got to be completely happy with it."

There have been reported Australia is looking to lure Jones back home after Michael Cheika stepped down following their quarter-final loss.

The 59-year-old Jones was the coach of his native Wallabies when they lost to England in 2003 final and Sweeney said: "When you're in Eddie's position, you're going to have people sniffing around and you can imagine the story Australia would put together.

England has won a Grand Slam and a Six Nations since Jones took charge and Sweeney believes they can get even better under his guidance.

"Yeah, I do think so. He's done a fantastic job with this squad -- look where we were at the last tournament," he said.

"He's unearthed some fantastic players who have huge careers ahead with England. He gets on well with that squad, he's committed to England rugby, so he's got an awful lot more to offer yet."

Sweeney added: "It's not job done yet, it's a bit like a pipeline and there are other players out there who need to be brought on.

"He's probably going to look to get a pool together of 50-55 players who can go the entire distance so he'll be looking long-term."