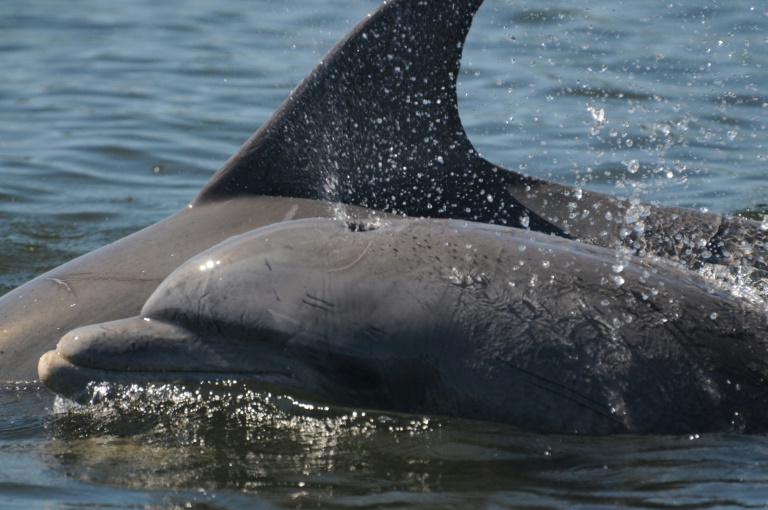 The new study looked at a population of some 420 dolphins living in the English Channel. (Photo: AFP)

The skin and blubber of bottlenose dolphins in the English Channel contain alarmingly high concentrations of mercury and other toxic pollutants, researchers said Thursday.

Biopsies taken from scores of the coastal dwelling mammals revealed levels among the highest ever observed for the species, as reported in the Scientific Reports journal.

The toxins -- which become especially concentrated in mother's milk -- have been linked to declining birthrates among numerous marine mammals.

Long-lasting industrial chemicals known as persistent organic pollutants (POPs) linked to cancer and other diseases in humans were banned in most nations in the 1970s and 1980s, but are still found across a large range of marine wildlife.

The toxins become more concentrated as they work their way up the food chain to top predators, whether fatty fish such as tuna or mammals such as dolphins and killer whales.

One family of chemicals called PCBs (Polychlorinated biphenyl) -- used in industrial products ranging from paint and flame retardants to electric wiring and hydraulic fluids -- is especially prone to this kind of "bio-accumulation".

Known PCB 'hotspots' include the Strait of Gibraltar, southwestern Iberia, the Gulf of Cadiz and the Mediterranean Sea.

"These high PCB concentrations are still a major cause of decline in European cetacean populations," noted the study, a category that includes dozens of species of whales and dolphins.

Scientists have calculated that PCB levels of nine milligrammes per kilo are sufficient to impair reproduction and the immune system of marine mammals. A higher threshold -- 41 mg/kg -- was found to cause "reproductive failure" in Baltic ringed seals.

The new study looked at a population of some 420 dolphins living in the Normanno-Breton Gulf in the English Channel, which is exposed to intense industrial, agricultural and urban activity.

In samples taken from 58 dolphins in the English Channel, 57 of 58 dolphins exceeded the lower threshold, and 51 out of 58 surpassed the higher one.

Males showed higher levels, but this was because females "off-loaded a large proportion of PCBs to their young during gestation and ... lactation," the study noted.

The research team, led by Krishna Das of the University of Liege in Belgium, said the Normanno-Breton Gulf should be designated a "special area of conservation" because it contains the last large European population of bottlenose dolphins.