CULTURE Enjoy the unique and varied tastes of China's treats

Enjoy the unique and varied tastes of China's treats

Chinese culinary culture is known for making best use of nature’s offerings and cooking them in the best ways to preserve the original flavor. 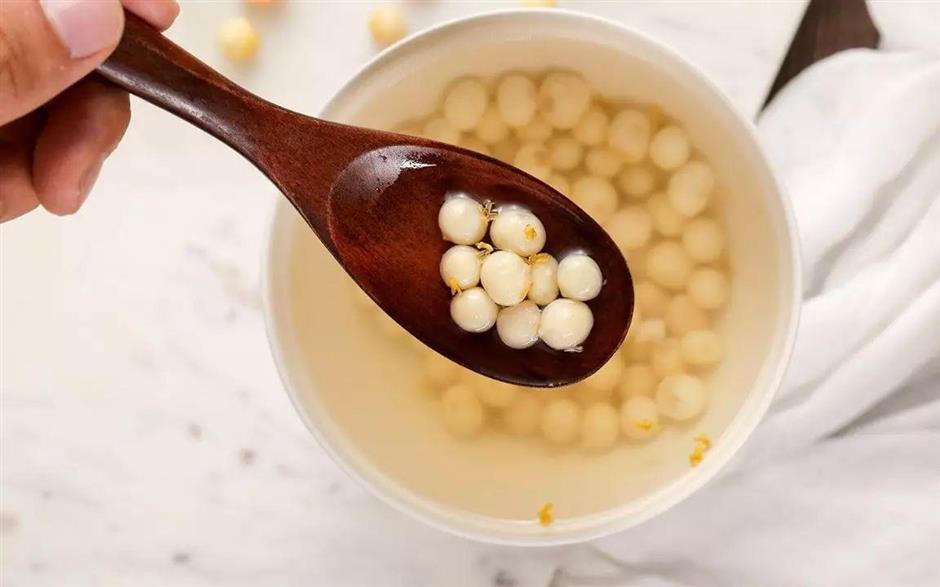 Across China, less popular or obscure produce that seems to be neither edible nor palatable are cooked into highly sought-after delicacies — such as the flower of taro or the stalk of water caltrop.

Jitoumi, which translates as chicken head rice in English, are the white kernels of gorgon fruit (qianshi), an aquatic plant with surface-floating leaves.

Traditionally harvested and consumed in Suzhou, gorgon fruit kernels are regarded as a treasured ingredient in the Jiangnan region — areas south of the Yangtze River — not only because their unique flavor, but also the intensive labor required in acquiring those seeds.

Jitoumi must be harvested and processed by hand. The farmers in Suzhou get up very early in the morning and work in the water for five to six hours using a dagger-like bamboo knife to cut a hole in the center of the giant round leaves, then pull the fruit out of the water and cut it from the stem. Afterward, vendors will work hours to retrieve the kernels from the hard shells by hand.

The delicacy usually comes into season in the fall around the Mid-Autumn Festival, but harvest time can be early as the end of August or start of September. The price of jitoumi is quite high, at the moment it’s around 300 yuan per kilo (US$44).

The starchy gorgon fruit kernels can be used in both savory and sweet cooking.

A classic Suzhou-style recipe is stir-frying the kernels with fresh river shrimp, a dish highlighting the contrasting textures and natural sweet flavors of both ingredients.

For a seasonal dessert, there’s a simple recipe to enjoy the original flavor of the kernels — just melt some rock sugar in boiling water and cook the kernels for one to two minutes. The cooked kernels can also be added into sweet red bean soup or white fungus soup for some extra bite.

In traditional Chinese medicine, dried jitoumi has the property of tonifying kidney and spleen. 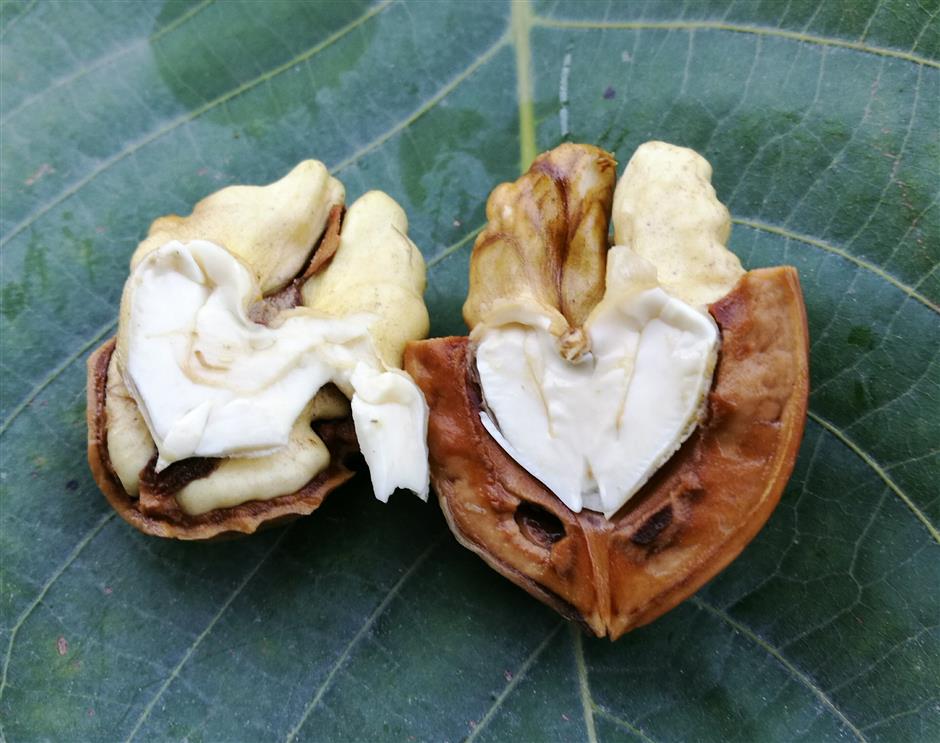 Fresh walnut is eaten directly as a snack in summer.

The walnut is one of the most popular nuts consumed in China. The nutrient and protein-rich ingredient not only makes delicious dishes and baked goods, but also provides health benefits with the high amount of essential fatty acids the nuts contain.

Dried walnuts are found in the pantry in a lot of households, not just as a healthy snack, but as an ingredient to make delicious desserts or add texture in savory dishes.

What people are not used to eating are fresh walnuts. Generally harvested in summer, the moist walnut kernels are fresh and crisp rather than rich and nutty.

To eat fresh walnuts, one must peel off the membrane wrapping the kernels, because it has a bitter taste and unpleasant texture. It’s an easy task as the stretchy membrane can be removed easily, just like peeling grapes.

Fresh walnuts are a nutrient-rich snack. Originally, it’s more commonly eaten in the production regions such as the Xinjiang Uygur Autonomous Region and provinces of Sichuan, Yunnan and Shaanxi. Though, gradually, the seasonal treat has been introduced to more places, as people can purchase fresh walnuts online.

Because the fresh walnut kernels are moist and light in flavor, it’s easy to over consume them as snacks without noticing.

Walnut is a high-energy ingredient and should be eaten in moderation. 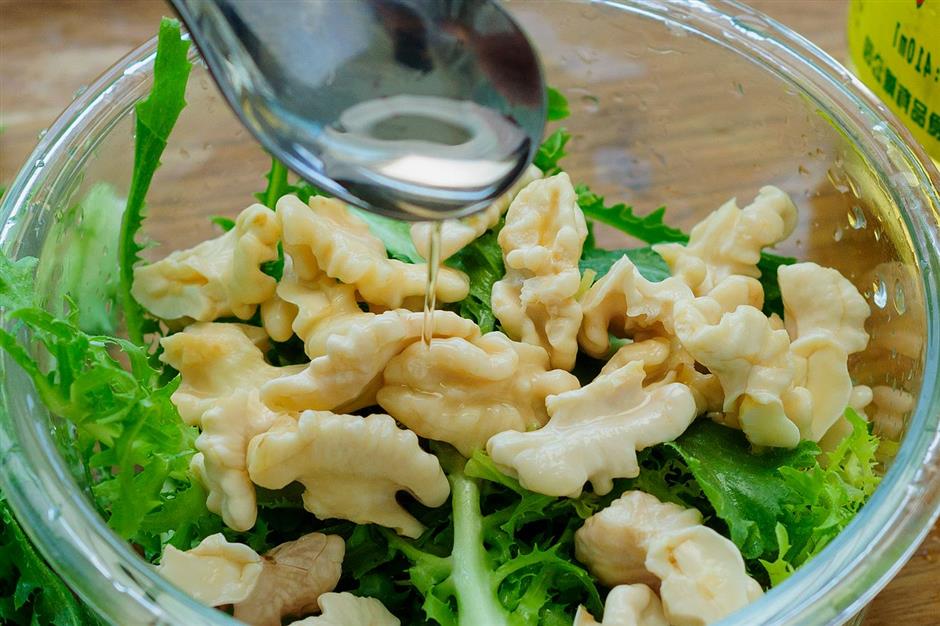 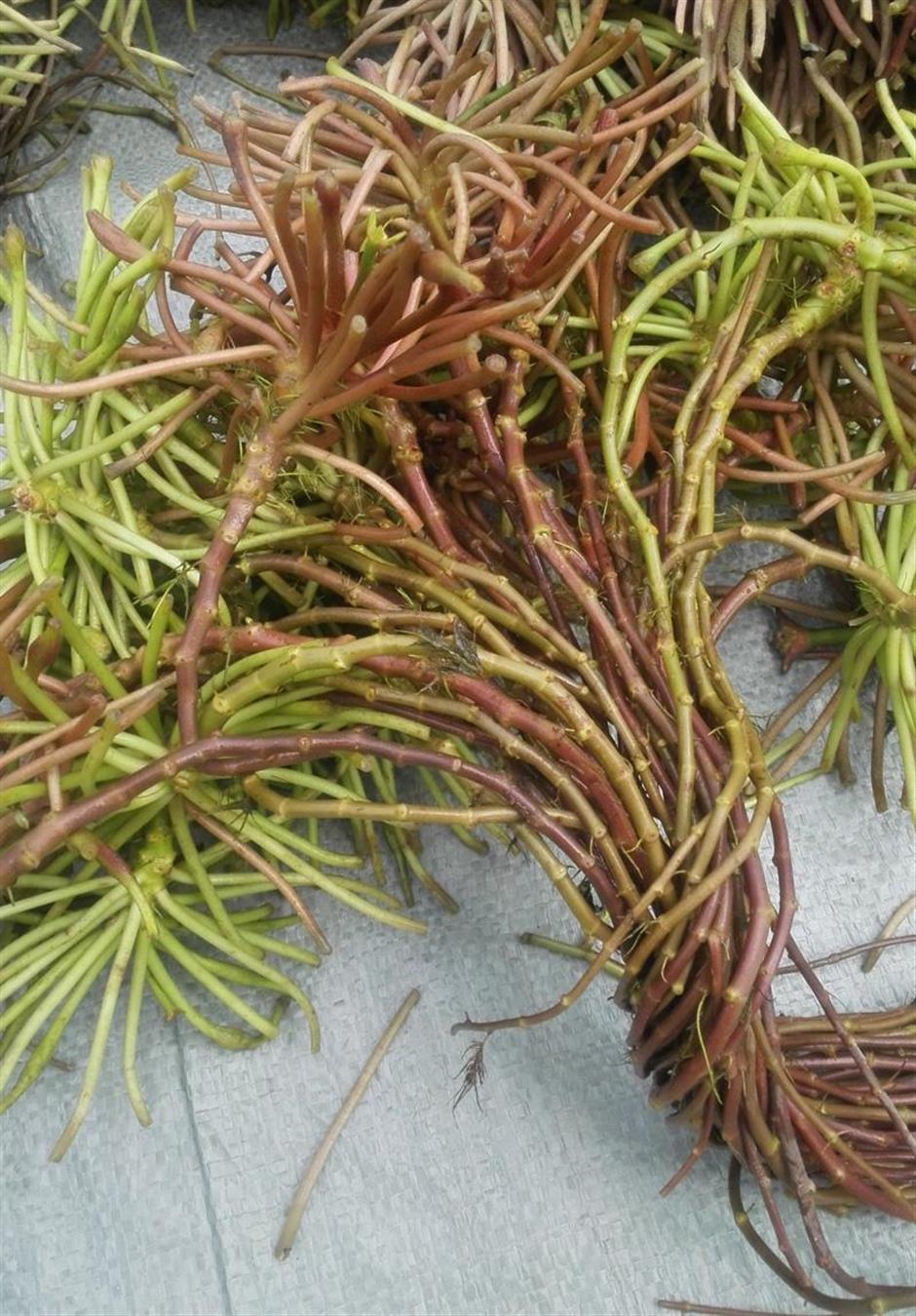 Water caltrop, or lingjiao, is an aquatic plant that produces edible fruit that resembles the head and horns of a bull.

It’s common to boil the water caltrop fruit and eat it directly as a snack. The starchy fruit can also be braised with rich pork belly meat or steamed with rice as a staple dish.

In some places, the stalk of the wild water caltrop plant is considered a delicacy. After removing the leaves and fuzz, the thin stalks of water caltrop can be made into a stir-fry with garlic, chili and soy sauce, an appetizing dish that can accompany plain congee. A tip to eliminate the astringency of the stalks is blanching them in water quickly and then squeezing out the water. 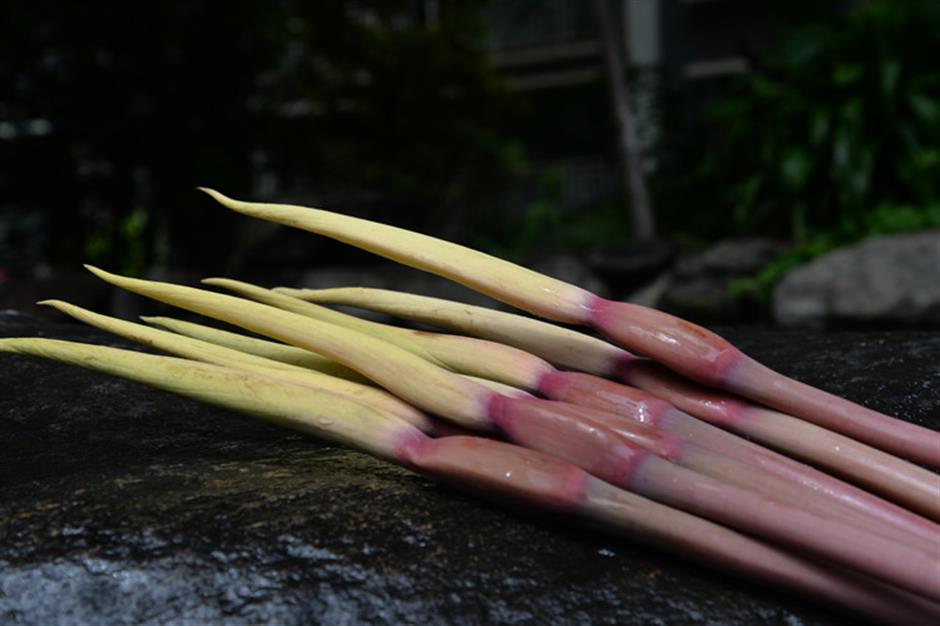 Taro flower is a delicacy in Yunnan Province.

It’s not unusual to cook and eat blossoms such as the rose or pumpkin and osmanthus flowers. But have you ever tried taro flowers?

Taro, which acclimates to warm and humid climate, is widely cultivated in southern Chinese provinces. The root vegetable is often eaten directly as a staple after it is steamed, braised with rich meats as a substitute for potatoes or added in dessert soups.

The taro plant’s yellow flower and purple stem is also a delicacy in Yunnan cuisine. In rural areas, the stalk and leaves of the taro plant are gathered to feed the pigs, while the flowers are picked as a delicious vegetable.

The taro flower has light fragrance. It’s also meatier than most other flowers, so there are different ways to cook and eat them.

Stir-frying fresh taro flowers with garlic is a quick recipe to enjoy their crunchy texture. It can also be stir-fried with lean pork meat.

Taro flower and eggplant is a classic combination in local cuisine. The two ingredients are either stir-fried or steamed together, often seasoned with peppers and chili sauce.

Taro flowers are almost exclusively eaten in Yunnan. The dishes are not found on menus in Shanghai restaurants, but Yunnan taro farmers do sell fresh taro flowers on Alibaba’s e-commerce platform Taobao. The price is around 30 yuan per kilo.

Though taro flowers are easy to cook in the same way of common vegetables, one should be cautious when preparing the raw ingredient. The flower buds must be removed completely, or else the dish will have a numbing feeling. It’s also best to wear gloves when picking out the buds.