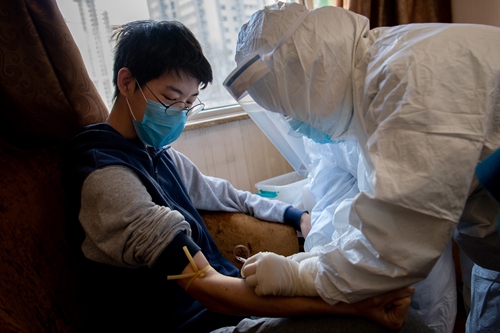 As the death toll from COVID-19 soars worldwide, Chinese students' plans to study abroad have been significantly affected, as cancellation of recruitment events and safety concerns hold students back from submitting applications to schools in the epidemic-stricken regions, especially the most popular destinations such as the UK and the US.

Bai noted that the decline in such applications from China from April through June might be up to 60 percent.

Chinese students' applications to schools in the UK have fallen by at least 50 percent, reported the BBC on Wednesday, citing data provided by the Beijing-based New Oriental Education and Technology Group.

The coronavirus outbreak has also hurt overseas higher education institutions' recruiting events in China, with in-person tests and other engagements having been cancelled.

About 76 percent of 230 US higher education institutions said that their outreach events in China were affected in a survey conducted from February 13-26 by the Institute of International Education (IIE), a US-based international education and training organization.

US schools are trying to leverage virtual communications and webinars, offer online language testing in lieu of in-person tests, and extend application deadlines to reduce the effect, according to a report released by the IIE on March 5.

"Students are anxious about whether they will be able to go abroad to study this year, while those who have not yet applied are hesitant and cautious about their plans, due to the coronavirus outbreak in large parts of the world," Bai explained.

A junior student from Beijing Normal University, Sun Chen, who has received offers from universities in both the UK and Singapore said that he decided to accept the Singapore one because the epidemic situation in the UK holds him back.