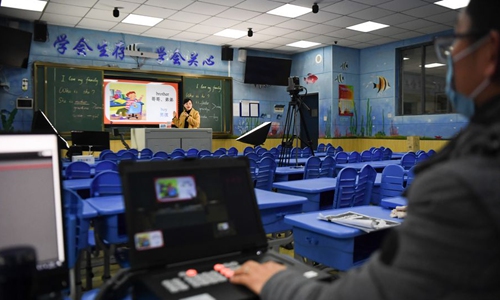 Academic exchanges between China and other countries are hit by the COVID-19 outbreak as Chinese students who plan to study abroad are facing visa difficulties, while returning students also having to struggle with travel bans and other inconveniences.

An education consultant in Shanghai, who preferred to be named as Hannah, told the Global Times on Wednesday that although they didn't feel tightening offer issues from overseas universities, Chinese students are worrying about whether they could enrol on time this autumn as processing of US and Australian visas has been suspended.

The US embassy and consulates in China announced the suspension of visa processing on February 3 without specifying when it will be resumed.

Students going to the US usually apply for visas from April to May to guarantee that they can enter the US by the fall semester starting from late August. "Some of the students who I represented and who have been admitted to top schools, are anxious as the visa policy is now uncertain, which depends on the development of the epidemic," Hannah said.

Catherine Cao, a junior student in journalism and communication, planned to do some summer research on linguistic analysis in the US to enrich her resume before applying for a PhD program in the fall of 2020. Cao told the Global Times that she is making Plan B: to do a program at her own university, as "US professors may hesitate to issue invitation letters due to visa barriers."

Quality short-term research can help a lot in an application, therefore it's hard to evaluate how much impact the pneumonia outbreak would have on the academic year of 2020-21, said Hannah.

Hannah said that none of the students who she helped with the application process had received invitations or positive responses to letters inquiring about summer research from overseas professors, which is "different from the usual situation."

Incumbent students returning to their schools are also affected by the travel bans.

Gao Yi, who is attending a high school in Florida in the US, just finished the quarantine period after spending the Spring Festival back in China. But she was lucky as she might have failed to return if she had booked a flight later than February 2, the time when a travel ban on non-citizens with a travel history to China took effect..

In a latest case indicating similar concerns about studying abroad, a man surnamed Liu from Wuhan was caught at the highway exit in Shanghai and quarantined after he took a ride on a freight truck to Shanghai when the city was in lockdown, Shanghai police said on Monday.

He told an epidemic control staffer that since Wuhan was sealed off, he planned to sneak to Shanghai as a transfer stop because he need to study abroad in March.

Australian media also reported that the authorities did not release any visas to Chinese students after a travel ban was announced on February 1, barring people who have been to China in past two weeks from entering the country except citizens and permanent residence holders.

Several Chinese PhD candidates and visiting scholars who have obtained offers from Australian universities confirmed with the Global Times the report, saying their visas have been delayed for several months before, due to "unknown reasons". Now the suspension of the visa issue just added fuel to their anxiety.

They are now planning to start a petition to enquire about visa issues.

"The Australian government should not stop all student visa processes even if the students are in good health conditions and haven't travelled to Hubei Province, where the virus originated from, during the past month," a PhD candidate who preferred not be named said. The student also criticized the Australian side for damaging the academic exchange in the name of preventing virus spread.

Dai Ziquan, after returning to Singapore, quarantined himself for two weeks at a hotel at his own expense, before resuming work at an architecture lab at National University of Singapore as a post-doctorate research fellow.

A Japanese student who gave her name Akane is an exchange student at Tsinghua University in Beijing. She said she is in her hometown in Japan and is worried that she could not go back to Beijing to finish her study after her university in Japan cancelled many study exchange programs due to the coronavirus outbreak.