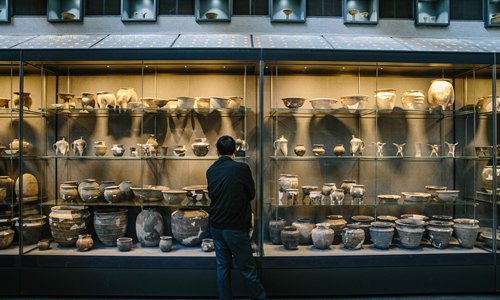 Visitors look at the Bronze Jue Vessel with Nipples at the Erlitou Relic Museum in Central China's Henan Province on October 30. (Photo: GT)
Was China's first recorded dynasty, the Xia (C.2070-C.1600BC), actually real? Although ancient histories recorded its existence, a lack of hard archeological evidence lead to divided opinions among scholars around the world.

Discovered in 1959 by historian Xu Xusheng, the Erlitou Ruins in Luoyang, Central China's Henan Province, are about 3,500 to 3,800 years old, dating them to the time period of the late Xia or early Shang Dynasty (C.1600-1046BC). The current predominant theory among Chinese archaeologists is that the site was a capital city during the middle to late Xia Dynasty. Over the past 60 years, archaeologists have excavated more than 10,000 items from the 40,000-square-meter site.

These have served as highly valuable resources for crucial academic studies on topics such as the beginning of Chinese civilization and the rise of kingships in ancient China.

This year marks the 60th anniversary of the ruin's discovery. After two years of construction and a cost of 630 million yuan ($89 million), the long-expected Erlitou Relic Museum officially opened to the public on October 19 in Luoyang. More than 2,000 items are on exhibition, including bronzes, jades and pottery wares, attracting a significant number of visitors. On the first day of its opening, the number of people visiting the museum reached 38,000.

As Xu Hong, head of the Erlitou Archaeological Project at the Chinese Academy of Social Sciences (CASS), said in an interview with the Henan Business Daily that the museum will allow Erlitou to branch out beyond archaeological or academic circles to reach the public.

The archeological discoveries made at the Erlitou Ruins hold great significance to understanding early Chinese civilization, such as the earliest prototype of the Forbidden City, bronze ware workshops and an urban road network, which are all on display at the museum through the presentation of texts, photos, replicas, videos and VR technology.

Among the many exhibited items, one popular display is a replica of the Turquoise-inlaid Dragon-shaped Bronze Object, which the public has dubbed a "super national treasure." Unearthed at Erlitou in 2002, it was exquisitely decorated with more than 2,000 pieces of turquoise, a very precious material at the time that was often worn as jewelry by the noble class. The object is also notable because it is extremely rare to see such extravagant use of turquoise and delicate crafting skills in objects associated with the dragon totem in early China.

Many visitors were curious to see the real thing, so they wondered why a replica had been put on display.

According to the museum, to best protect and preserve the rare object, experts decided to keep the original object at the lab at the Institute of Archaeology of CASS in Beijing. As the facilities at the museum continue to improve, "we will strive to present both the authentic piece and the replica at the Erlitou Relic Museum," said the Luoyang Cultural Heritage Administration.

"The exhibition and preservation of relics require the support of a large amount of advanced technology, attention to detail as well as time and effort," Han Jinju, a docent at the museum, told the Global Times on October 30, while pointing toward a man who was examining a tomb on display behind a wall of glass.

"That is our deputy curator. He comes to check the lighting, humidity and temperature of the tomb exhibition several times a day," Han explained.

In addition to the valuable relics on display, the museum also dedicated one entire exhibition hall to the academic giants who have studied the Erlitou Ruins and the Xia Dynasty. Old photos, manuscripts, texts and tools they used for the archaeological excavation give visitors a glimpse into their life-long commitment to exploring China's vast history.

To give visitors more insight into the day-to-day operations of archeologists, one room shows off how pottery excavated from the tombs in Erlitou is arranged during the study. This room is a copy of the archaeological display room where archaeologists work every day.

"These pieces of pottery are the earliest pottery in China…Despite the disputes among scholars regarding the chronology between the Xia Dynasty and Shang Dynasty, they cannot dispute the evidence in this room," said Xu, while speaking to media in the archaeological display room where he works in February 2018.

In addition to the room, the museum also set up work spaces with glass walls so visitors can watch researchers as they go about their work evaluating and reconstructing the unearthed relics. Additionally, the museum will hold workshops and lectures that the public and students can take part in, Han explained.

"The 60th anniversary of the Erlitou discovery marks a time to look back in review, as well as an opportunity to look forward. We will strive to put more effort into the excavation of the Erlitou Ruins as well as the excavation and study of the ancient relics around Erlitou," Chen Xingcan, director of the Institute of Archaeology of CASS, told media.