An Ethiopian runner created a new women's record for the Shanghai International Marathon, which saw 38,000 runners start their journey in rain on Sunday morning. 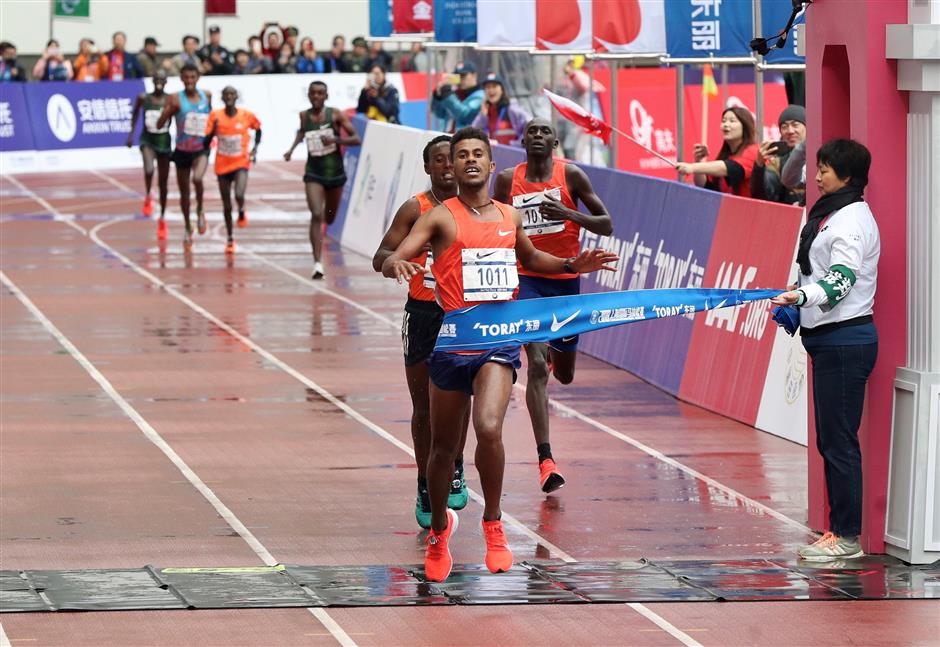 The 2018 version of the annual competition saw 25,000 participants in the 42-kilometer marathon, 6,000 in the 10km and 7,000 in the 5.5km event. Yebrgual Melese Arage from Ethiopia became the first female runner to cross the marathon finish line at Shanghai Stadium, clocking 2:20:37. She broke the previous race record of 2:21:52 created by compatriot Tigist Tufa in 2014.

The men’s title was won by another Ethiopian runner, Seifu Tura Abdiwak, clocking 2:09:20. It was his maiden Shanghai race. 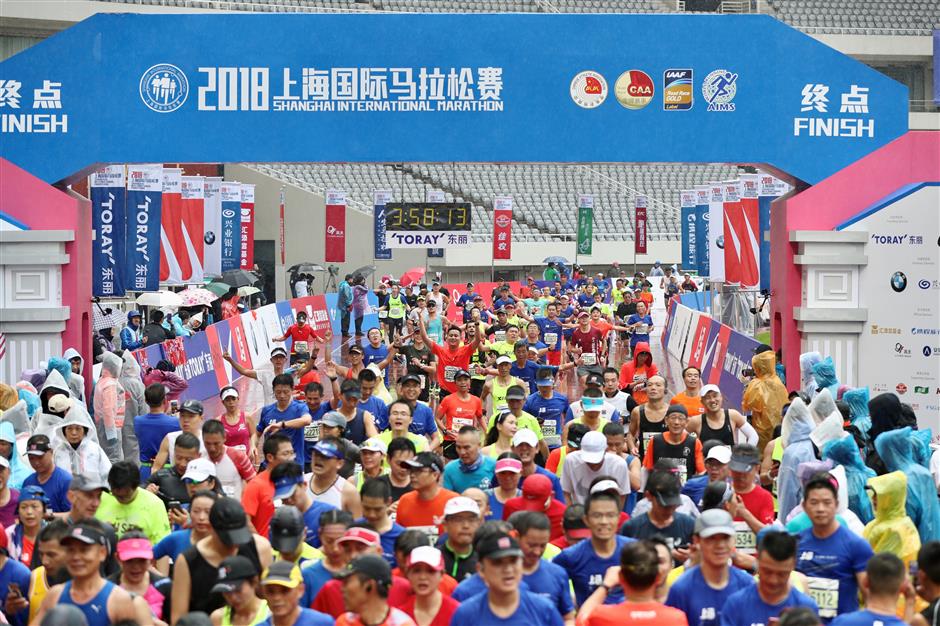 Runners at the finish line of the Shanghai International Marathon at Shanghai Stadium on Sunday morning.

The rainy weather created good air quality for the race, though runners had to fight the relatively low temperature, especially in the early stage of the race.

“It’s a bit cold today but thankfully there is not much wind which could make the race even more challenging,” said Guan Yousheng, the first Chinese runner to cross the finish line. He completed the 42 kilometers in about two hours and 18 minutes, two minutes longer than his best.

“The atmosphere was great and course surface very smooth. This is my first Shanghai International Marathon experience, though I have heard a lot about its good organization before. I hope I can keep coming back,” said the 24-year-old Guizhou Province native. Runners at the Shanghai International Marathon at Shanghai Stadium on Sunday morning.

Marathon world record holder Eliud Kipchoge from Kenya also attended the event as a guest, and shot the starting signal for the runners. The 34-year-old set a new world record for men of 2:01:39 on September 16 at this year’s Berlin Marathon.

According to the organizers, over 6,000 foreign runners took part in this year’s Shanghai International Marathon. Near 4,000 volunteers and 1,000 medical staff served for the event. Apart from medical stations near the finish line, 22 medical spots have been arranged along the routes as well as 22 ambulances.

Cover image: Yebrgual Melese Arage from Ethiopia celebrates as she became the first female runner to cross the finish line of the Shanghai International Marathon at Shanghai Stadium on Sunday morning, clocking 2:20:37.