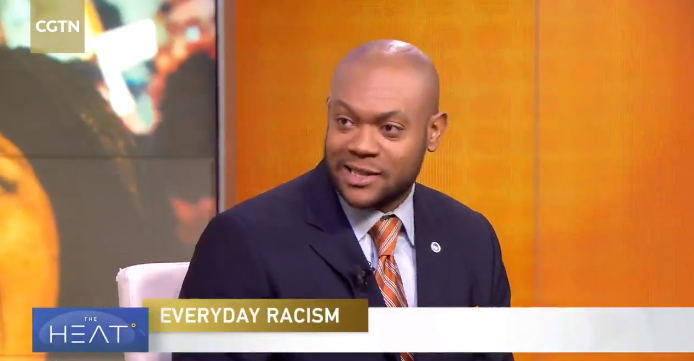 Several viral videos showing racially charged speech or perceived ethnic bias have lit up the Internet in recent weeks, igniting fierce debate across Western countries about racism, prejudice and human rights.  But for many, those debates don’t go far enough and when interest wanes, bias lives on.

In this edition, Robyn Maynard, the author of the book, “Policing Black Lives: State Violence in Canada from Slavery to the Present;” Jan Wong, Canadian journalist and author; Professor Ronald Hall of the School of Social Work at Michigan State University; and Ray Baker, host of the Public Agenda podcast which examines politics, race and social justice, shared their views with CGTN’s The Heat.

“What we are seeing, unfortunately, is that there are those who will watch these videos and will still conclude for some reason it is still the victim’s fault," Ray Baker said. "When we saw Walter Scott get shot in South Carolina, people said that he shouldn’t have run. When we saw Tamir Rice get shot in Ohio, people said well he shouldn’t have been playing with a toy gun that wasn’t clearly marked and labeled. And there was even a juror in Michaels Lair, the guy who shot Walter Scott in South Carolina, who said I will never convict a cop.” He urged people to be honest as to what they are seeing to provide justice for all.

Ronald Hall touched upon the nuance of this issue. “Typically individuals we think of as victims of racism also act out racist behaviors.” Therefore, he said that “until we take the benefit out of racism, unfortunately, it’s going to be manifested and nuanced a little differently between different groups. But the behavior itself is going to still be existent.”

Robyn Maynard added, “It’s a beautiful thing that we see children of many different racial backgrounds, for example, in schools together. But if we don’t address the fact that you know a six-year-old girl was handcuffed, her hands and feet together in her school, if we don’t address the fact that black students are being disproportionately expelled and suspended, then for all of those positive interactions that those students are having we are not addressing the very real violent situations that black youth continue to face.”