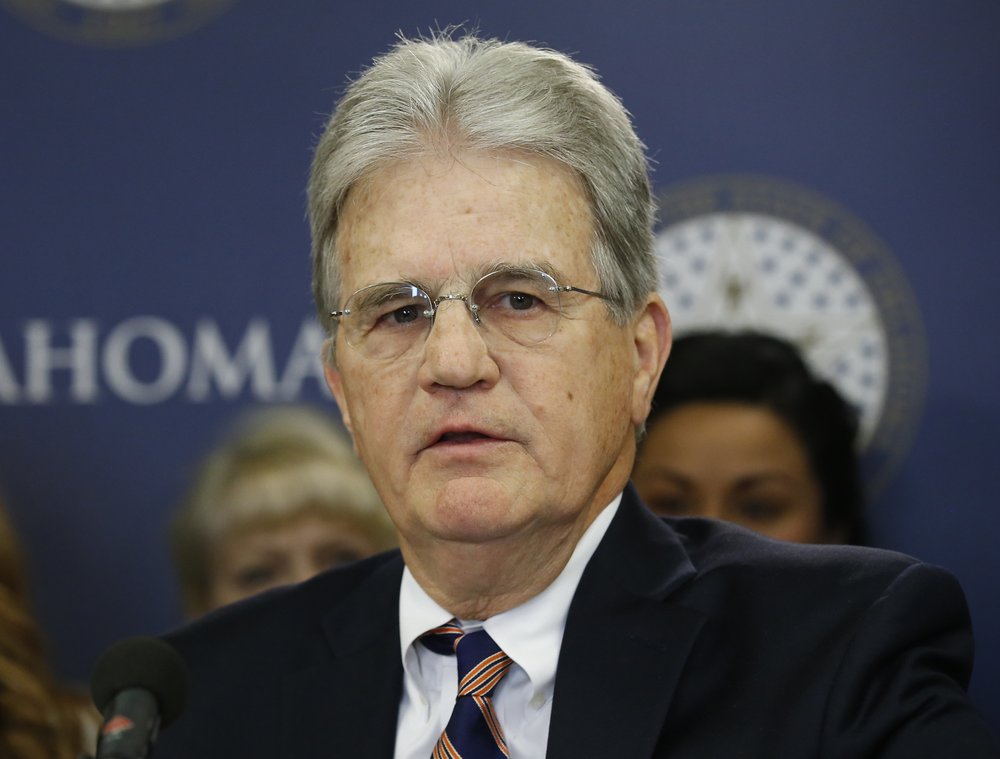 In this March 28, 2018 file photo, former US Sen. Tom Coburn speaks at a news conference in Oklahoma City. Coburn has died. (Photo: AP)

Former US Sen. Tom Coburn, an Oklahoma family doctor who earned a reputation as a conservative political maverick as he railed against federal earmarks and subsidies for the rich, has died. He was 72.

Coburn, who also delivered more than 4,000 babies while an obstetrician in Muskogee, where he treated patients for free while in the Senate, died early Saturday morning, his cousin Bob Coburn told The Associated Press in a text message. Tom Coburn was diagnosed with prostate cancer years earlier.

Known for bluntly speaking his mind, Coburn, a Republican, frequently criticized the growth of the federal deficit and what he said was excessive government spending endorsed by politicians from both political parties.

“I’ve got a flat forehead from beating my head against the wall,” he told voters during a town hall in July 2010.

First elected to the US House during the so-called Republican Revolution in 1994, Coburn fiercely criticized the use of federal money for special state projects and was among the few members of Congress who refused to seek such earmarks for their home states. He represented northeastern Oklahoma for three terms, keeping a pledge in 2000 not to seek re-election.

He returned to his medical practice in Muskogee before asking voters in 2004 to send him back to Washington, this time to the Senate, so he could fight big spenders and ensure “that our children and grandchildren have a future.”

He left the Senate in early 2015, before his second term that expired. He announced the decision just months after being diagnosed with a recurrence of prostate cancer, but said his health wasn’t the reason. He said he was convinced he could “best serve my own children and grandchildren by shifting my focus elsewhere.”

The US Sen. James Lankford, a Republican from Oklahoma, called Coburn “an inspiration to many.”

“He was unwavering in his conservative values, but he had deep and meaningful friendships with people from all political and personal backgrounds,” Lankford said in a statement.

In 2009, Coburn shrugged off constituent complaints after the state’s largest newspaper, The Oklahoman, ran a front-page photograph of Coburn hugging then-President Barack Obama.

“I’m not aligned with him politically. I don’t know what people back home in Oklahoma would be worried about,” Coburn told the paper. “But you need to separate the difference in political philosophy versus friendship. How better to influence somebody than love them?”

Coburn said he and Obama had become friends during orientation as freshman senators in 2004.

As a senator, Coburn released a series of reports on what he described as wasteful government spending.

“From tax write-offs for gambling losses, vacation homes, and luxury yachts to subsidies for their ranches and estates, the government is subsidizing the lifestyles of the rich and famous,” Coburn wrote in the report.

A joint report in August 2010 by Coburn and Arizona Sen. John McCain, who died in 2018, criticized stimulus spending, including $1.9 million for international ant research and $39.7 million to upgrade the Statehouse and political offices in Topeka, Kansas.

“You cannot negotiate with Coburn,” Reid, a Democrat, declared in 2008. “It’s just something you learn over the years is a waste of time.”

During the debate over the debt ceiling in the summer of 2011, Coburn was part of a bipartisan “Gang of Six” senators who supported an alternative plan to cut the deficit by almost $4 trillion over the next decade through budget cuts and increased revenue through changes to the tax code.

Coburn also released a 614-page plan that outlined how the government could slash $9 trillion from the federal deficit over the next decade. Coburn’s suggestion led to the elimination of a federal tax subsidy for ethanol later that year.

After leaving the Senate, Coburn continued to crusade against taxes, criticizing the Oklahoma Legislature when it passed a package of tax hikes in 2018 to shore up the state budget. A group led by Coburn attempted to launch a petition drive to overturn the tax hikes but was ultimately unsuccessful.

“Our state and our nation are better because of the lessons in fiscal responsibility we’ve learned from Dr. Coburn,” Oklahoma Gov. Kevin Stitt, a Republican, said in a statement Saturday.

Born in Casper, Wyoming, on March 14, 1948, Coburn grew up in Muskogee, Oklahoma. After graduating from Oklahoma State University, he went to work at his family’s business in Virginia, Ophthalmic Division of Coburn Opticals, from 1970 to 1978. He later attended medical school at the University of Oklahoma.

By the time he jumped into politics — a decision he said was based on runaway government spending and his distaste for career politicians — he was married to his wife, Carolyn, with three children and had established a successful medical practice.

While in the Senate, Coburn delivered babies for free after he was threatened with censure for violating Senate conflict-of-interest rules that prohibited him from receiving compensation for professional services.

Coburn had several health scares during his time in office. He was treated for malignant melanoma in 1975, and in 2011, he underwent surgery for prostate cancer.

But health woes didn’t seem to damper his contentious attitude.

After revealing in 2003 that he had been diagnosed with colon cancer and underwent surgery and chemotherapy, he told a Tulsa World reporter: “You should be writing about Medicaid and Medicare instead of my health.”