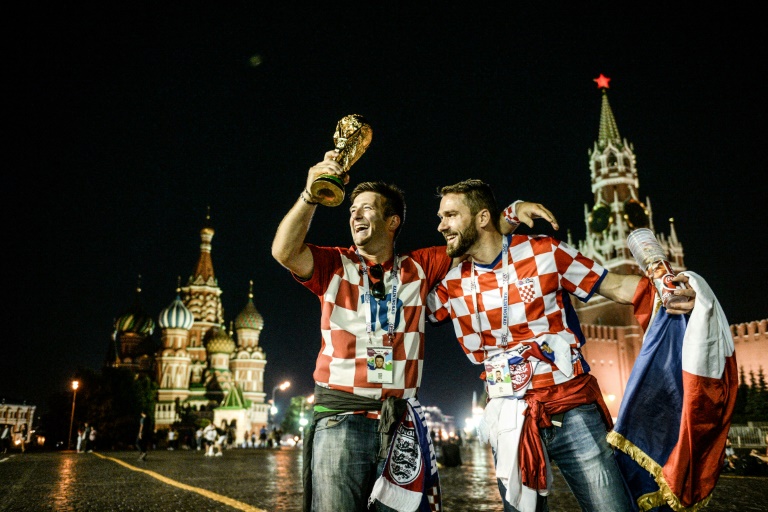 Croatia's exhausted and battered players set their sights on the World Cup final against France on Thursday as England reflected on a missed opportunity to end more than half a century of pain.

Luka Modric's team were taken to extra-time for the third consecutive match in Moscow's Luzhniki Stadium on Wednesday but somehow found the energy to overcome England 2-1.

Croatia have now played the equivalent of a whole match more than Didier Deschamps' team ahead of Sunday's final in the Russian capital but must gird themselves for one final push for glory.

In beating Gareth Southgate's young team, Croatia have surpassed the achievement of the heroes of 1998, who reached the semi-finals in France in their first World Cup as an independent nation.

The victory sparked wild celebrations in the Balkan nation, where tens of thousands of fans poured onto the streets and squares, singing, letting off flares and waving red-white-and-blue flags.

"The Fiery Ones are in the final, the nation is in a trance -- one more step to the title!" said the Jutarnji List, using the team's nickname.

Dalic said there would be no excuses from his team despite their exertions over the past two weeks.

"This is fantastic. Two players played with half a leg, but it didn't show. In extra-time nobody wanted to be substituted. This shows character and is what makes me proud. Nobody gave up," said Dalic.

"We prepared to get to the final and we want to play it," he said. "Going to extra-time might be a problem along with the fact France have had an extra day to recover but there will be no excuses."

For England, the emotions are mixed -- pride at reaching the last four is tempered by disappointment at letting a golden opportunity slip through their fingers.

They were on course for their first final since 1966 when they took the lead through Kieran Trippier's superb early free-kick, but Croatia hit back through Ivan Perisic and Mario Mandzukic in front of 78,000 spectators.

In London, an initial wave of elation turned to heartbreak as 30,000 beer-soaked fans in Hyde Park watched their team come up short.

Around 26 million people are believed to have watched the match on TV in Britain.

But despite the bitter disappointment, captain Harry Kane said England had restored pride during their run to the semi-finals and could use it as a springboard for success.

"It's massive that we had a good tournament and restored pride in the nation. The fans are excited to watch us play and that's how we have to keep progressing," he said.

"We should be proud and hold our heads up high because we've come a long way from two years ago."

Kane looks set to claim the Golden Boot as the World Cup's leading scorer, but the Tottenham star rarely looked like adding to his six goals against Croatia.

But the Guardian said the players might struggle to shake off the ordeal of losing the semi-final. "The World Cup may never open up so obligingly again," the paper said.

France, who boast a powerful mix of youth and experience, will start as favourites when they play the third World Cup final in their history after they beat Belgium 1-0 in Saint Petersburg on Tuesday.

Manchester United midfielder Paul Pogba said the pain of losing the Euro 2016 final to Portugal will spur him on.

"I don't have a star. It's on the shirt but I didn't win it. I want one," Pogba said of the star on the French shirt that represents the 1998 World Cup win.

"I know the taste of defeat in a final. It's really not good, very bitter... we really want to finish well, with a smile."

As Paris makes preparations for fans to watch the final, the Eiffel Tower's management said the monument would be shut as part of security measures being taken for a big-screen broadcast of the World Cup final nearby.